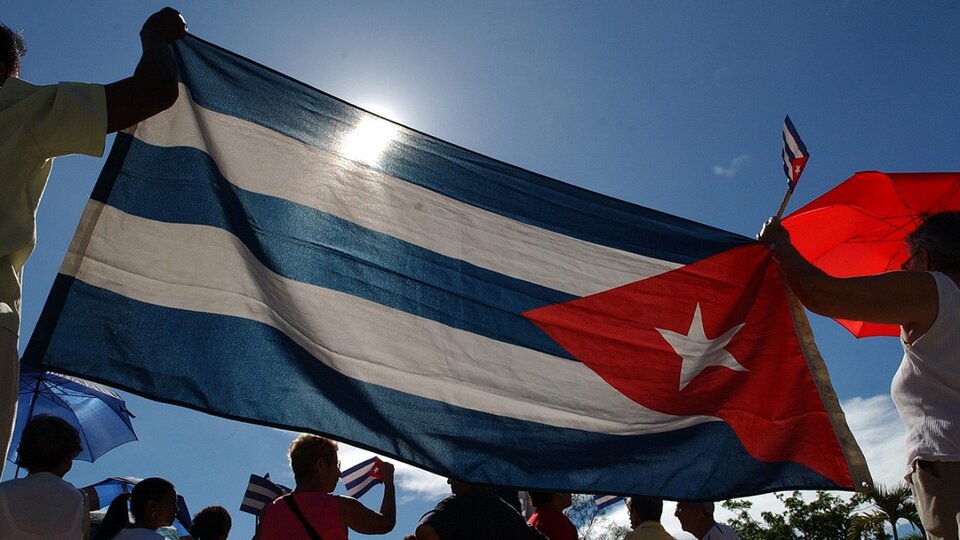 We are a little nervous, quite sparkling from the beer, and we just did some bullshit, but the only asshole is me, I’m 25. The two of them are much older, they are already well-known journalists, one of them legendary. We try not to look at each other so as not to laugh, but it does not come out and we are tempted. We did a round of five a while ago to decide who would get on the stage of that sidewalk in the peripheral neighborhood of Havana, to thank the neighbors for the overwhelming welcome they just gave us.

It was all very fast. We have been in Cuba for almost two weeks now, traveling in a Van, with two drivers who are Angolan veterans and with whom after 5000 kilometers we are almost relatives. This morning we returned to Havana because today is the day on which the anniversary for which we were invited is celebrated: 35 years ago the Committees for the Defense of the Revolution (CDR) were created, which are actually every block in each neighborhood of every city on the island.

Today in the Van, as soon as we entered the city, we asked what we would do at night, and they told us “nothing, they have dinner at the hotel”. It is that the invitation had been on the occasion of the anniversary of the CDR, but it consisted of knowing the country from end to end. The celebration in each committee that night was collective but at the same time intimate: neighbors who have known each other for their entire lives would go out to celebrate their organization in the streets of their neighborhoods, they told us, which in tense times included the military defense of the island , but now they work as the caretaker of the block, where it is known if there are one or more pregnant women on the block who eventually need a doctor, if an old person lives alone, or is the place where everyone who has a problem goes .

It was not contemplated that we, five Argentine journalists, went to any celebration because the CDRs were not to be shown. We, who had met in Ezeiza, spent the first days divided into two groups (three in favor, two against – from Cuba -), but with the bustle of the trip we have gotten along well. One of the “against” said in the Van that we wanted to go to some celebration that night. The rest of us said no, that it was fine like this, that we leave them alone. The one who insisted was a guy from a very right-wing southern newspaper, whose owners had been involved in crimes against humanity. At that time it was not said that way. Democracy was a couple of years old. But in Ezeiza that journalist had confessed to the loose of his body, when the rest of us were surprised that he had been invited and we told him so. “I’m going to know, but later I’m going to tell the whole truth,” he told us, as if he already knew Cuba and as if he already knew what the truth was that he would tell. The rest of us snort. He was a downright anti-Cuban.

This afternoon, one of the drivers took care of his claim, but said that he could not resolve it. That I had to consult. That it should be any other CDR but not the one in your neighborhood, because that could be taken as an “influence” that no one wanted. He consulted and after a while they passed him the data of a block in any neighborhood.

At night we arrived, after more than half an hour of travel. We got out of the Van; Those of us “in favor” felt someone else’s shame because we were interrupting with our presence a celebration that was not for us. However, as soon as we entered the neighborhood, we saw a parade made in a hurry that said “Welcome Argentine brothers.” And on the other side we saw a hundred men, women and children and the elderly applauding and celebrating us.

Those simple people came to greet us. We sink into a sea of ​​arms, hugs, kisses, hair caresses, laughter. The table of honor had been set for us. They filled us with gifts: the children had made crafts for us, dolls, painted wood, necklaces of pebbles, drawings with markers. They filled our table with all their homemade delicacies of beans, avocados, stuffed sweet potatoes, bitter green leafy salads and drizzled with a pepper scented oil.

And then the show began. We saw ten children go upstairs who stood in line on the stage and began to recite many stanzas from Martín Fierro, more than I knew, more than each of us memorized. They had learned them that afternoon when the news of the visit reached them. And those little voices telling us what was ours and we did not know were in a matter of seconds piercing our emotion. We ended up clapping and shaking because all that party that was theirs was giving it to us.

You had to be thankful. The five of us got together and decided that of course the one indicated to go up to the stage was the one from the newspaper del sur, the one who believed he knew the truth. The other “against” was not so rigid: he had voted the same, dying of laughter, because he was the one who best knew the bitterness and the bile that the one from the south had already brought.

Now the southern one is already on top of the platform. I look at Enrique Sdrech and I look at Ariel Delgado, the members of my group “in favor”. We are tempted because if that love has overwhelmed us, we suspect that it has too, but we know that it is corroded by an intense aversion. We made a little justice trap by appointing him delegate. Let him speak and be grateful, if we saw him be surprised, let himself be embraced and moved by the recitation of the children. He takes the microphone he attaches.

We see him perspire, his shirt is soaked. He looks at us and we make gestures of “let’s go ahead”, and we laugh out loud again. But when he begins to speak, we hear him thanking him, and as soon as he finishes with the rigor he grabs the microphone tighter and brings it to his mouth, and he seems on the verge of an inflamed harangue. I look at Enrique and Ariel. We are no longer tempted, we are waiting because we do not know what will come out of his mouth.

She sucks in the air and fans her hands before starting to speak again, but now in a higher tone and without basting, with bad grammar but with delivery. What he says is that the peoples should never separate, that the people of Cuba are wonderful and that they never thought of living a night like that, Cuban brothers, I will always carry them in my heart, he says, beating his chest. Then he starts to cry, and there the children go to surround him, to hug him, to fill him with kisses again.

With Enrique and Ariel we get rid of happiness between can and can of beer. “It was a contribution,” says one. Then the neighbors take the three of us out to dance. Only the very old stay in their chairs. The rest is a pure party, family, neighborhood, hip and shoulder, of bodies and spirits ready to have fun in that small point of the planet where the neighbors of a block celebrate their way of life.