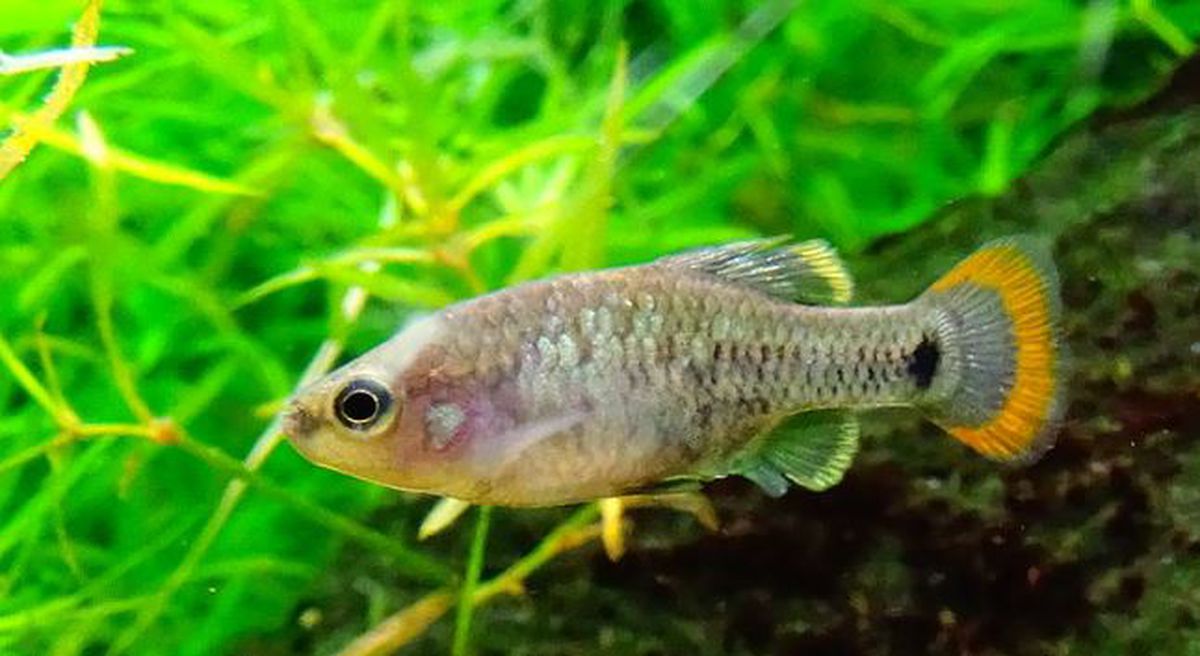 The tequila fish swims again in the waters of the Teuchitlán river, in Jalisco, thanks to a process of rescue and reintroduction of the species, news that has made biologists around the world happy at the end of the year. It barely measures eight centimeters and weighs 15 grams, but the picote tequila, which is also called, as well as others of the same family, the goodeidae, are valuable for behavioral and evolutionary biologists due to their viviparous condition, that is, the females are fertilized and go through a 45-day pregnancy. But first they will have chosen a partner, which forces the males to dance properly and show the best color in the tail or fins. An intense orange hue will tell the female that this specimen has survived, despite its attractive appearance, the predation of other aquatic beings. And it will consider it fit. But industrial and agricultural advancement has been depositing pollutants in Mexican rivers, seriously affecting the reproduction of the goodeidae. They no longer look so beautiful colors and are born with neurological alterations that make it difficult to dance that attracted females. In short, there are no longer males like the old ones: the goodeidae They are in danger of extinction.

Mexico is, along with Asia, the only place where these minnows are raised. But Mexico is also a country with 70% of its rivers polluted. Bad business. The tequila or cockerel fish only existed in the Teuchitlán river, in Jalisco. And its presence was lost as of 1992. In later years some specimen or several appeared, but they were considered extinct soon after. In 2003 he lost his track for good. The efforts of various departments of the Michoacan University of San Nicolás de Hidalgo, led by scientist Omar Domínguez Domínguez, have now managed to return it to its original waters. Fortunately, in some research centers in the United Kingdom and the United States, this species is studied in captivity and some zoos, such as Chester, conserve them, which has allowed it to be raised and reintroduced into its habitat. It was the first attempt in all of Latin America to repopulate a viviparous fish, Michoacán scientists say on their website. And they have succeeded. By phone, Domínguez Domínguez, research professor at the Aquatic Biology Laboratory of the Michoacana University, explains that the species began to be reintroduced in 2014 but now it is possible to speak of “a stable tequila population that is colonizing other parts of the river”.

Humans do not eat tequila picote, but invasive species, such as tilapia or carp, have a good feast with them. The Teuchitlán spring has also suffered constructions such as dams or spas that have fragmented the ecosystem where the small fish developed. In addition, the cattle drink in the only refuge for tequila, which is, precisely, on the tequila route, through Jalisco lands.

Darwin’s natural selection explains the evolution of species, but the naturalist could not explain why the animals that populate the world are so diverse in their shapes and colors. All that for what. For sexual selection, which is the other way to evolve. In this second the goodeidae, which have already lost several of their species due to contamination, including tequila, happily brought back to life. The tail finished in an intense orange tone is not the only grace of the Teuchitlán cockerels: it must be moved with art. “The males make a very special courtship, they move their fins and some females come up licking their lips because they think they have discovered a dragonfly larva. They go to the deception and it is then when the male takes advantage of the copulation ”. This sensory trap is explained by Omar Arellano, a biologist at the National Autonomous University of Mexico (UNAM), who devoted six years of his doctorate to the girardinihthys multiradiatus, other goodeidae. “They acquire color through food, they eat water fleas, dragonfly larvae, little red worms,” ​​he continues. After 45 days, the delivery will leave the embryos on the banks of the river, where the temperature and the food are more favorable. Right where the current deposits industrial products and pesticides. They are born in a contaminated house and their small anatomies already carry the poison in their body, explains the biologist.

The fry will never be beautiful adults and the difficulties of reproduction will gradually destroy the different species. “We have already lost several of this family, including tequila. They occur mainly in the rivers of the center of the country, the Lerma, the Pánuco and the Balsas, and in lakes, such as Pázcuaro or Cuitzeo, which are drying out, ”laments Arellano, an expert in ecological risk and ecotoxicology. There are also them in the forest of Chapultepec, the Central Park of the Mexican capital. And there were them in the ancient lake of Texcoco, where the great civilization of the Mexica lived before the Spaniards with Hernán Cortés at their head dried up all that. “The Aztecs put them on their table and some of the species are eaten today in tamale, not tequila,” continues the UNAM researcher. “It is great news at the end of the year that the colleagues from Michoacán have managed to reintroduce this species into their habitat,” he is delighted.

Mexico has a huge pending issue with the protection of its nature. Many species occur only in this country of great environmental wealth, such as the axolotl, which is capable of rebuilding its amputated limbs in a very short time. That miracle is in the sights of prestigious laboratories around the planet, but the axolotl is in serious danger of extinction due to problems similar to those of the tequila picote. “The free trade agreement signed with the United States and Canada in the 1990s strongly developed the industry, but no laws were adopted to safeguard the damage associated with it. The new treaty, the TMEC, includes environmental commitments that may contain this problem. Let’s see if they apply ”, Arellano distrusts.

Biologists and other colleagues strive to give back to nature what humans strive to take away from it. It is not easy, it takes years and the process is sometimes unsuccessful. In this case, the project has been accompanied by environmental education plans among the population of the area. “Groups have been consolidated that are in charge of monitoring tequila, cleaning the waters, and educating children. There are River Guardians, ”says Domínguez Domínguez. A great help for these scientists, who can already dedicate themselves to other things. And they are in it, in the reintroduction of new species of the same family that are also in extinction or in serious danger. Thus, those who have participated in the Michoacan project can toast at ease this end of the year. The cock already moves its orange tail through the waters of Teuchitlán.