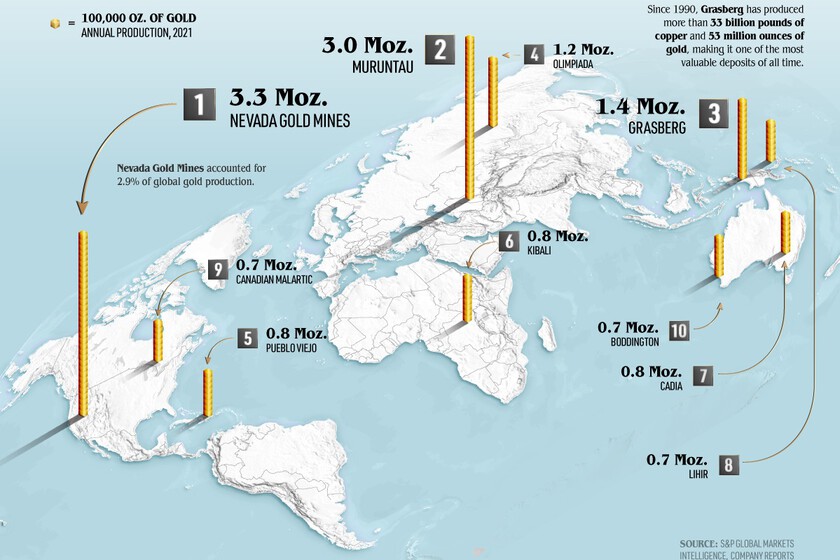 The ten most important gold mines in the world, all of them underground, gathered in one map

The price of gold has risen almost 50% since 2016, and is hovering around an all-time high of €1,730 an ounce. That’s good news for miners, who achieved record profit margins in 2020. For every ounce of gold produced that year, gold miners pocketed an average of €800, much higher than the previous high of €650 in 2011. Now, with the inflation rates peaking In several countries, gold mining could be a sector to watch, especially given its status as a traditional hedge against inflation.

Historically, gold mining has been an extremely lucrative business with companies from all over the world taking advantage of the rich materials that lie underground. In fact, all the continents of the earth, with the exception of Antarctica, have mines within which gold can be found and extracted.

Regardless of the method used, the ultimate goal of mining is to recover as much useful material as possible. The price of gold in 2021 started at around €1,600 per ounce, which highlights how lucrative production can be. And to give you an idea, in a year, approximately 2,500 to 3,000 tons are extracted of gold, which is well over a million ounces of gold.

Since the market for these materials is in high demand, companies take advantage of technology to speed up the entire process and increase production and profits. There are a few different ways that gold and other similar materials can be extracted, from using water and dredging to strip mining. This graphic developed by Visual Capitalist illustrates in detail which are the 10 largest gold mines in the world according to production.

See also  Acquisition of QAPA by the Adecco group: the power 2 interim has just been born! 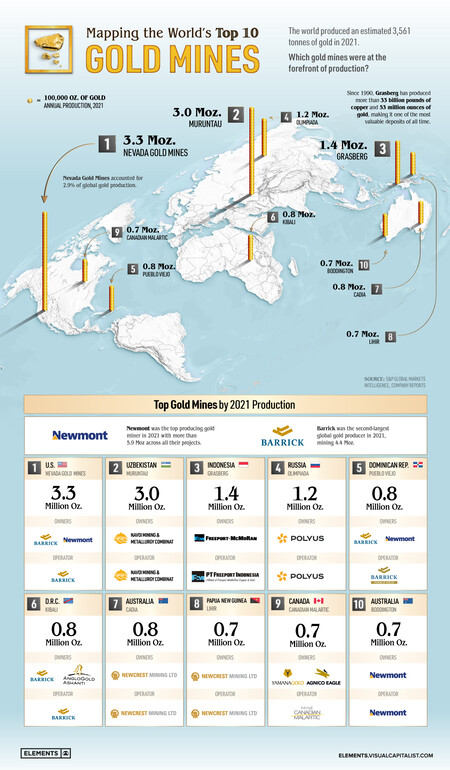 You can consult the graph in its maximum resolution here.

The largest mines in the world

In 2019, the two gold miners that occupied the first two positions in the ranking, Barrick Gold and Newmont Corporation, combined their operations in Nevada. The resulting joint venture, Nevada Gold Mines, is now the world’s largest gold mining complex with six mines producing more than 93.5 tons of gold year.

The Carlin trend mines that can be found in Nevada are unique for several reasons. First of all, it is an extremely long belt in Nevada, which spans about 56 km long and 8 km wide, which allows it to cover an impressive distance. However, the type of gold found there is known as invisible gold. This means that gold can only be discovered by chemical analysis due to its microscopic nature.

The Muruntau mine, owned by the state of Uzbekistan, is the largest open pit mine in the world, so its physical size is as impressive as its output. It produced 3 million ounces, making it the second largest gold mine. Suffice it to say that Muruntau accounts for more than 80% of Uzbekistan’s total gold production. It is almost 3.3 km long, 2.5 km wide and 600 m deep, giving it a massive presence in the desert. Inside this huge mine, it is believed that there is more than 4,000 tons of gold.

Only two other mines, Grasberg and Olimpiada, produced more than 1 million ounces of gold in 2021. Grasberg is not only the third largest gold mine, but also one of the largest copper mines in the world. It is a huge operation with around 30,000 employees working in the Papua region of Indonesia.

In fourth place is Olympiad in Russia. This open pit mine is exploited by Polyus. To give you an idea of ​​how much gold this particular mine produces, Polyus is the largest gold producer in Russia and the fourth largest in the world and the gold they can recover from Olimpipada accounts for nearly half of Polyus gold production. . It is believed that there is around 850 tons of gold in the mine.