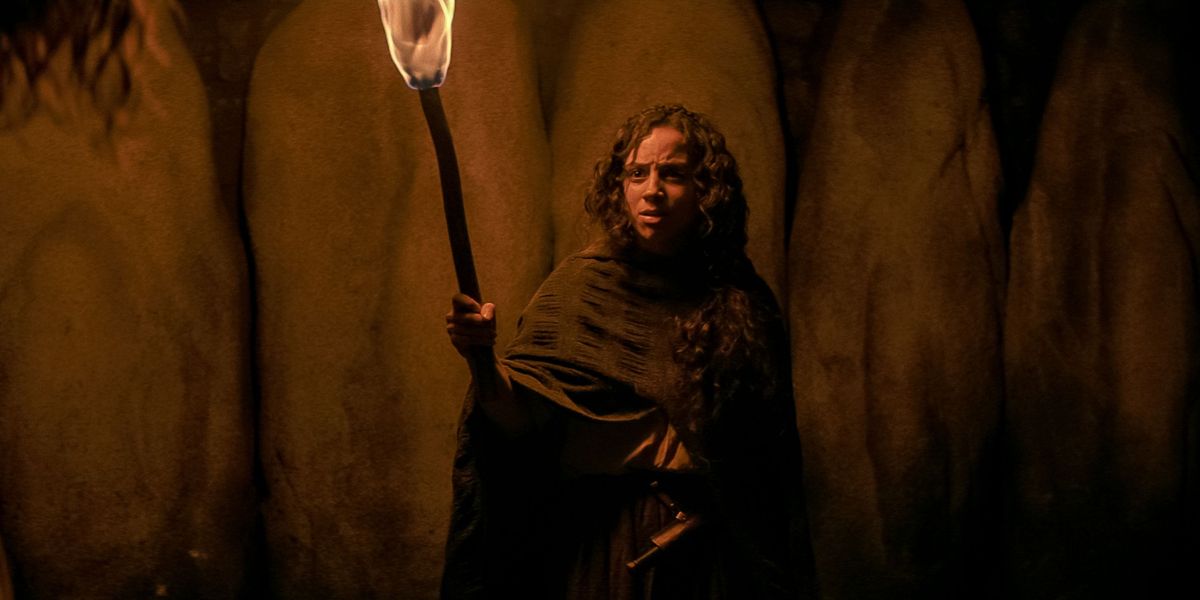 In the end, yes, there was a curse on The street of terrorBut it came from a completely different place and for a totally different reason. The street of terror 1666 Not only does it make all the pieces of the puzzle fit together, but it also shows that the whole, the product (the same story told over three films in serialized format), works. In the end, the trilogy is a story of revenge and love that spans five centuries and is reflected in the relationship between Sam (Olivia Scott) and Deena (Kiana Madeira). And, for a change, in the center of the story the protagonists are LGBT. Solomon Goode (Ashley Zukerman) made a pact with the devil to lead a prosperous life. He was tired of fortune turning its back on him. “Power, prosperity, future,” Goode explains to Sarah Fier when she discovers him in the diabolical cave where he performs his pagan rites. “One person every few years is a small price to pay,” says Goode. The deal goes like this: a Goode looks for a soul to possess and does all the paperwork so that this is possible (that if he engraved the name on the stone, that if he pronounced the spell … come on, all the paperwork ), and then the devil owns him and starts killing left and right. Cyrus Miller, the pastor, Hannah’s father, Sarah’s great love, is the first of many to come later. The deal, in addition, can be passed on in inheritance. First-born after first-born, the Goode family’s pact with the devil is nurtured. The murderers that sprouted from each pact dedicated themselves to feeding the agreement and once satisfied they took care to protect the pact generation after generation so that no one would discover the truth. That is why they persecute and kill the Berman sisters (Christine, yes, resurrected, but she had died first) and that is why they later persecute Deena. Once Nick Goode dies, Sam is freed from the enchantment.

Sarah Fier found out the truth, but it didn’t help. Who were they going to believe: the one who had already been accused and sentenced as a witch or the poor broken man who had lost his wife and son) and who just wanted to get on with his life? In the final installment we discover that it was Solomon who cut off Sarah’s hand and that it was she who on the gallows swore revenge: to harass him forever and ever until someone discovered the truth. Although, beware, it was not Goode who accused her of being a witch, although it was the one who took her to the scaffold in the town of Union. The villain’s speech at the end is not bad at all, in fact it is what makes the series have weight. Fier berates Goode for Pastor Miller killing 12 children, including his brother. “Innocents,” he cries out. And Goode responds: “Innocents? Who is innocent? Your neighbors persecute you, they hate you, they curse your name. Ignorance runs wild and fear and you … you surrender to it. They are afraid of you because they know that you are different. And it is true. You are someone who refuses to abide by their rules, who asks for more from life. You are like me. “

It’s interesting what it raises: Sarah is doomed no matter what. Goode is obviously the bad guy, but what he says is true. Not about him being the same as him, of course. But what it says about the society that has condemned it. Sarah is condemned for loving another woman (in the end it is the spite of a rejected homophobic lover that lights the flame and revolutionizes the weak Puritan minds). If Sarah had gone into hiding, she would have ended up married to Goode and would have discovered his secret (or not) as well. The important thing is that the people, like the Goodes, write a name, Sarah’s, and sacrifice it in the name of … Puritanism? And the good thing is that in this case Sarah’s revenge does not require sacrifices, only that someone once and for all has the courage to see what really happened (no, there is no time travel in this story, only a trip in memory) and try to do justice, moving away from the typical character who demands death to appease his humiliation-pain-own-death. Not bad for a change.