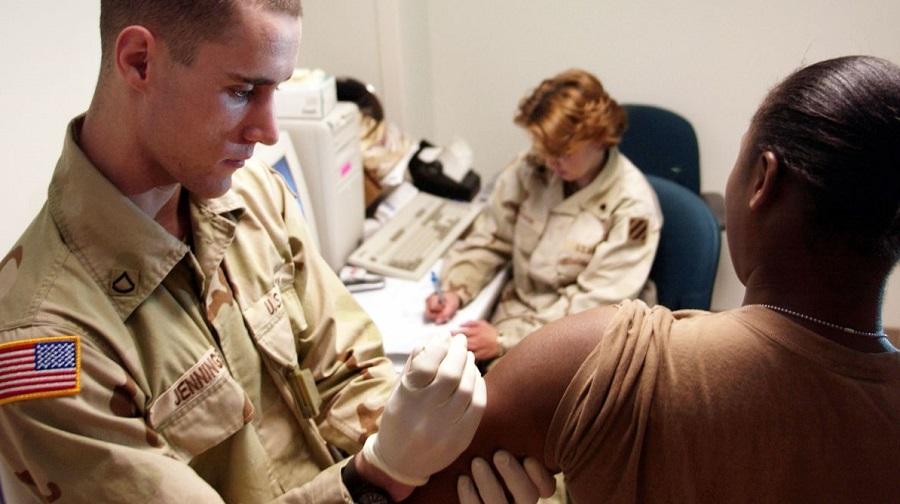 Are Western governments deliberately sustaining the pandemic by perpetuating it? DR

Contributed by Khider Mesloub – How to maintain the pandemic to justify and legitimize the modern health-security pronunciamiento accomplished with means of highly technological psychological conditioning, if not by the hysterical fabrication of the mythological viral peril, embellished with deliberately amplified statistical make-up. How to justify and legitimize the acceleration of the destruction of economic infrastructures, considered obsolete from the point of view of big capital, to hide the exacerbation of generalized military tensions against a backdrop of the militarization of society associated with a strategy of electronic social control, otherwise by yet another wave of viral health propaganda, based on the processing of anxiety-provoking information capable of inducing a state of stupefaction against a background of collective psychosis.

As Hermann Göring, minister under the Nazi regime and founder of the Gestapo, said: “And if you can find something to scare them, you can do anything you want to them.”

For the umpteenth time, while the Covid-19 had been in the process of being absorbed for several months, the rulers have just reactivated the factory of fear by disseminating the invariant catastrophe scenario carried by the terrifying Omicron variant – and its multiplied derivatives at will by sequencing carried out in the laboratory for the needs of the cause –, this serial killer threatening, according to government directors never short of imagination, humanity with disappearance.

However, according to the experts, certainly the Omicron variant, like its derivatives, is more contagious, but incontestably less lethal than the previous ones of the first waves (in particular the Delta variant). To listen to the rulers, the latest Omicron variant, like the plague, is about to decimate millions of people, including the quadruple vaccinated. Evidence of the ineffectiveness of mRNA vaccines.

In this regard, faced with the decline of the covid scenario to relaunch the viral epidemic soap opera, recently, curiously, the media have regularly published information relating to the appearance of a new scourge: monkey pox. A disease that was thought to be definitively eradicated. But under capitalism, the scourges fade temporarily only to resuscitate with more virulence in an even more cruel pathological form (war, crisis, impoverishment, disease, fascism, fanaticism, racism, etc.).

According to the WHO, curiously alarmist as during the Covid-19 pandemic, the cases detected could be only “the tip of the iceberg” (in other words, a statistically fabricated outbreak of cases should be expected) . Already, by a security reaction that has become customary, against a background of deliberately stoked psychosis, in Belgium, the government, mimicking the restrictive measures introduced during the Covid-19 pandemic, has decreed a three-week confinement for people infected with monkey pox. A decision that could be followed by other European countries affected by the disease.

Should we expect the establishment of total containment because of monkeypox? Because, according to the written press and the continuous audiovisual news channels, always quick to blacken the picture for the needs of the cause, the (Western) world would be confronted with a probable imminent “epidemic wave”. “We feel like we’re in a bad movie, lamented Delphine Peyrat-Apicella, clinical psychologist and lecturer at Sorbonne Paris Nord University. The media follow the evolution of the monkeypox epidemic in the same way as they did with Covid. This risks reigniting anxiety in the population, already weakened by two years of pandemic.

Paradoxically, still according to the media: the elderly – those over 50 – are immune to smallpox because they were vaccinated in childhood during the 1960s and 1970s. Indeed, until the end of the 1970s, particularly in France, children were required to be vaccinated against smallpox. According to several experts, thanks to their vaccination, seniors are able to produce, very quickly, antibodies against its cousin, monkeypox.

At present, the authorities of European countries recommend, curiously, the establishment of a reactive vaccination strategy around confirmed cases of the monkey pox virus. However, for several decades the world production of smallpox vaccines has been stopped. The total eradication of smallpox was officially declared by the WHO at the 33rd World Health Assembly in 1980. Since that date it was decided to no longer impose primary vaccination against smallpox, before finally completely eliminating the obligation of vaccination in 1984. Consequence: the vaccine is no longer available to the general public (the small stock available, sparingly manufactured, is reserved for nursing staff).

The vaccination strategy recommended by the European health authorities is therefore propaganda. This is a sleeve effect. As with the coronavirus where, at the start of the pandemic, for lack of vaccines, the rulers, by calculation, had imposed confinement, will we see the imposition of new restrictive measures in the event of the state manufacturing of an epidemic of monkey pox?

In any case, according to Camille Besombes, infectiologist and doctoral student in Arnaud Fontanet’s unit “This autochthonous circulation of the disease is completely new. Another novelty: these cases concern almost exclusively young men.” In other words, if with Covid, the elderly are the most vulnerable, with monkeypox, it is the young. We remember that in the name of the protection of the “old”, for lack of vaccines, the rulers had decreed the totalitarian confinement of the entire population and the shutdown of the economy. Would these same rulers decree, in the name of the protection of young people, the confinement of the entire population? The introduction of restrictive measures?

Thus, on the occasion of the surprising resurgence of monkeypox, it was discovered that an authentic vaccine, such as the smallpox vaccine, confers protection 60 years after its injection. Unlike the new medical commercial products that the global government and pharmaceutical mafia have brought to market, sold under the label of mRNA “vaccines”. Moreover, these hastily developed mRNA “vaccines,” still in clinical trials, were designed to counter the Wuhan strain virus. According to the specialists, as successive waves of contamination had proven, these vaccines do not seem suitable for countering new variants, all the more so against the next variants announced “prophetically” (I was going to write profitably, as much financial is, no pun intended, capital) by many “experts”, at the dawn of next winter.

Undoubtedly, mRNA vaccines seem to have poor efficacy. Worse: these products would participate, according to some experts, in the mutations of the virus. And for good reason. Western mRNA vaccines seem to have the particularity of selecting resistant mutations due to the fact that they only decode the Spike protein (therefore a single recognition site), unlike a vaccine of the whole inactivated type (developed in particular by the laboratory Sinovac) capable of encoding a multitude. In other words, mRNA vaccines would promote, according to specialists, the appearance of resistant mutations, that is to say the multiplication of variants. As Institut Pasteur researcher Frédéric Tangy, a vaccine specialist, acknowledges: “Vaccinating more and more people will give rise to other variants resistant to immune responses.”

In this respect, the choice of Western governments, at the instigation of pharmaceutical laboratories, to exclusively acquire new mRNA vaccines, renowned for their specificity in favoring the creation of mutants, is a challenge. By this strategic choice of mRNA vaccine with mediocre efficacy, are Western governments deliberately maintaining the pandemic by its perpetuation through the reappearance of new variants, thus requiring, to the great benefit of pharmaceutical companies, six-monthly booster vaccinations for a long period in order to enrich Big Pharma, but also to justify the establishment of the health-security dictatorship, shield of the Great Reset program currently largely implemented?

In truth, according to doctors, the current Omicron variant (and its derivatives) would only cause a bad cold. One thing is certain, since last year, the decrease in the number of deaths has been noted in all countries. Just like the number of contaminations.

Faced with the breathlessness of the state pandemic of Covid-19, is monkeypox the next state epidemic manufactured for the needs of the cause?