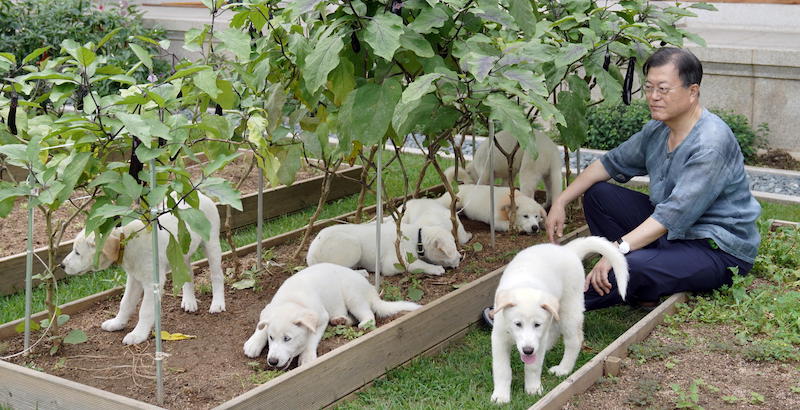 During a meeting with Prime Minister Kim Boo-kuym on Monday, South Korean President Moon Jae-in said he wanted to ban the consumption of dog meat in the country, a centuries-old tradition that is still widely practiced in both South Korea and South Korea. other areas of East Asia. In recent years, the consumption of dog meat in South Korea has dropped both due to the commitment of animal rights activists’ associations, and because many have begun to increasingly consider dogs as a pet. However, it is estimated that around 1 million dogs destined to be eaten are still killed in the country every year.

Moon is a dog lover and several dogs live in the presidential residence, including Tory, whom he had saved from slaughter and which he had brought with him shortly after becoming president in 2017. Before that, Moon had promised between other things that would have banned the trade in dogs for food consumption. After being elected, however, he had taken a half step backwards, saying that this type of trade would be gradually abandoned.

The president’s office explained Monday that Moon addressed the issue while he was discussing with Kim about a plan to improve the management of abandoned animals. According to his spokesperson, Moon asked the prime minister if the “time has come to consider wisely to ban the consumption of dog meat.”

Dog meat has been eaten in South Korea for centuries. It was an important food source in times of hunger – particularly during the Japanese occupation (between 1910 and 1945) and the Korean War (between 1950 and 1953) – and continued to be consumed even after the end of conflicts. Dogs could be raised easily and there were many more than, for example, cattle, which were used mainly to pull carts or plow fields.

Even today in the country there are more than three thousand restaurants serving soups and dog meat drinks, especially between July and August, in the hottest time of the year.

Among the most popular dishes are the start – a boiled meat soup is considered invigorating – and the gaesoju, a drink made by boiling dog meat with various herbs. It is estimated that around two and a half million dogs are bred each year to make these recipes in South Korea, often in conditions described as terrible: mostly they are nureongi and Korean mastiffs, but there are also jindos and crossbreeds, add up purebred dogs that are abandoned by their owners and then introduced to the breeding.

Among other things, according to activist associations, the active farms in South Korea are many more than the 4 thousand indicated in the official data, which does not include the hundreds of illegal farms and kennels strongly suspected of selling dogs to slaughterhouses, contributing to the illegal meat trade.

– Read also: There are more and more stray dogs in Italy

Legally, breeding dogs for slaughter in South Korea is in a gray area. Dog meat is recognized as food by law, but dog farms are not equated with livestock farms and therefore are not required to follow the rules laid down for that sector. Furthermore, the law on the protection of animals in force since 1991 prohibits the “cruel” killing of animals other than livestock, but even though it implicitly refers to the slaughter of dogs and cats, it does not prohibit or limit their consumption, and over the years it has not led to greater regulation of farms and slaughterhouses.

See also  Night owls or early risers, who is the smartest according to science?

The decline in consumption observed in recent years is partly due to cultural factors, and partly to the commitment of animal welfare associations, including the Korea Animal Welfare Association, the largest in the country, which have denounced the poor hygienic conditions of the farms and helped save thousands of animals from slaughter.

In 2018, citing data provided by the metropolitan government of the country’s capital, the Korea Times he reported that nearly 40 percent of Seoul restaurants serving dog meat had closed in the previous ten years.

– Read also: Nearly 1,500 dolphins were killed in the Faroe Islands in a single day

In addition to South Korea, dog meat is also consumed in other Southeast Asian countries, including Vietnam, Indonesia, and Thailand. Its consumption is widespread in some areas of China, where according to research by the HSI, at least one third of the approximately 30 million dogs estimated to be killed each year to be eaten are killed, along with 4 million of the 10 million cats. that end up in the same way all over the world.

In April 2020, the Chinese Ministry of Agriculture had proposed a draft law to ban the consumption of dog meat, citing both the “progress of human civilization” and other reasons: in particular, concerns for animal welfare and those for the possibility of transmitting diseases from animals to humans, for example through “wet markets”, the food markets spread throughout East Asia where in some cases wild animals are sold, often still alive and in precarious hygienic conditions .

On that occasion, the ministry had removed the dogs from the herd list, referring to them as “special pets”; in the same days the city of Shenzhen, near Hong Kong, had become the first Chinese city to introduce a ban on the sale and consumption of dog and cat meat. For the moment, however, there are no detailed data to assess the impact these restrictions have had on the consumption of dog meat in China.