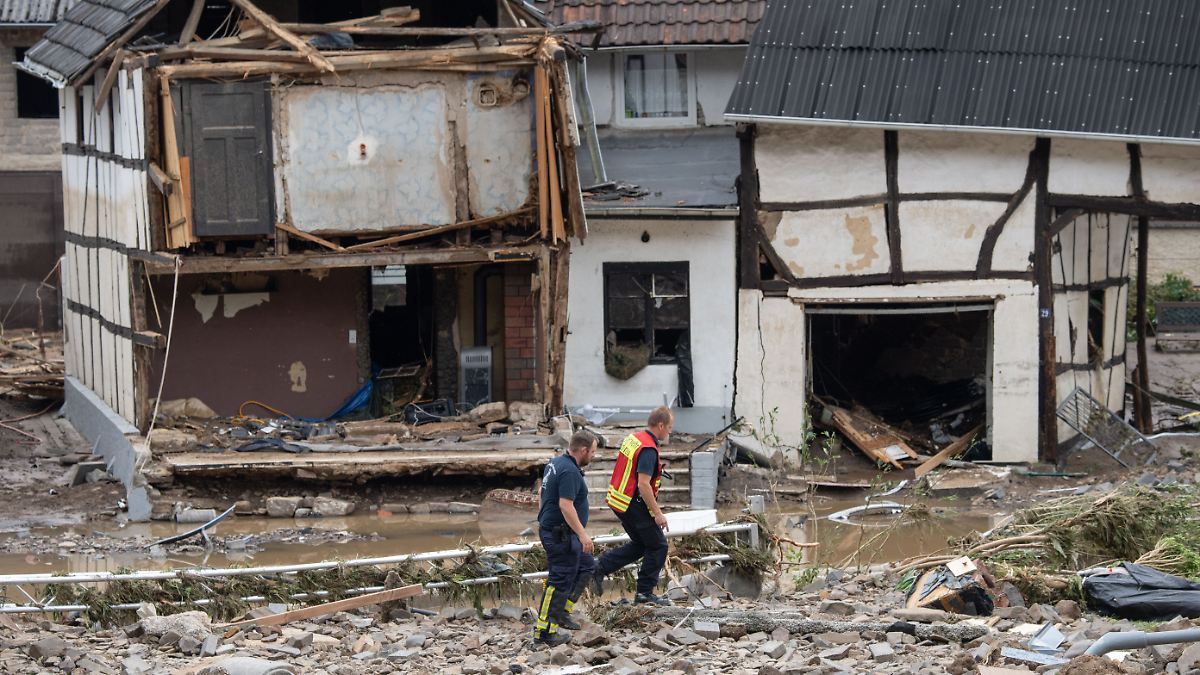 Whole areas have been devastated, houses have been washed away. After the heavy rains in western Germany, the number of deaths is increasing. In addition, numerous people are still missing. The situation is still confusing in many places.

At least 59 people died after storms in western Germany. In Rhineland-Palatinate 28 people died as a result of the flood disaster. In view of the large number of around 40 to 60 people still missing, possible further victims are to be feared, said the Rhineland-Palatinate Interior Minister Roger Lewentz on SWR television. Among the fatalities are residents of a facility for disabled people. The interior ministry explains that the floods came faster than the people could have been brought to safety.

In North Rhine-Westphalia the situation also remains tense. After the heavy rain has subsided, fire brigades and other emergency services are struggling in many places with the worsening flood situation. At least 31 people died, as reported by the NRW Interior Ministry. 57 people are also injured. The Cologne police reported 20 deaths in the region. Not all corpses sighted have been recovered, she said in the afternoon.

Im Sauerland two firefighters died. One of them was in Altena drowned while saving a man. In a flooded basement of a house in Geilenkirchen two lifeless people were found. According to initial investigations, there were two residents aged 74 and 78 years.

At the one threatened by a dam break Steinbach dam The water level is falling in the Euskirchen district. This was announced by Markus Böhm from the crisis management team. On the one hand, the inflow has decreased, said the managing director of the energy service provider E-Regio. On the other hand, the technical relief organization pumps water from the dam close to the border between North Rhine-Westphalia and Rhineland-Palatinate. There should be a new assessment of the dam on Friday morning. Because the dam’s drain is blocked as a result of the storm, the water cannot be drained off in a controlled manner. The Rhein-Sieg district had previously announced on Facebook: “According to current assessments, a sudden failure of the Steinbachtalsperre wall must be expected at any time”. The evacuations of the affected localities Swisttal and Rheinbach go on. “Under no circumstances should you go back to your houses and apartments,” warns the district administration.

The space Bad Neuenahr-Ahrweiler was hit particularly hard by the storm. Emergency services from the Malteser Aid Service from the south-west support the rescue workers. 1300 people are missing there. This was announced by the district administration. A spokeswoman said the cellular network was paralyzed – and therefore there was no cell phone reception and many people could not be reached. “We hope that clears up,” she said of the high number. A total of 28 deaths were counted by Thursday evening. But the circle announced that there were more fatalities. The spokeswoman did not want to name any numbers.

The crisis team in Rhein-Erft district in North Rhine-Westphalia has declared a disaster. Because of the flood situation along the Erft, there is a risk that the previously locally limited location could expand to Kerpen, Bergheim and Bedburg as well as Erftstadt, according to a press release. The municipalities belonging to the district were asked to “prepare and carry out the necessary civil protection measures such as evacuations and accommodation”. “We are currently going through a crisis, the dimensions of which cannot be assessed today,” says District Administrator Frank Rock.

Also in Wuppertal Heavy rains caused the Wupper to rise and so the streets were flooded. As a police spokesman announced, some roads on the valley axis along the Wupper were closed. Residents were therefore asked not to stay in the basement, but to move to higher-lying apartments.

In Hückeswagen im Oberbergischen district The Bevertalsperre overflowed due to the heavy rains. The situation does not seem quite as tense as it was during the night. “The dam that threatened to break is so far safe,” said a police spokesman in the morning. In the area around the dam, however, there are large-scale floods. Around 1500 people had to leave their homes in Hückeswagen. “During the evacuation measures a lot has to be done with the boat because the roads are no longer passable,” said the police spokesman. Meanwhile, the water will continue to be drained at the Wuppertalsperre in Bergisches Land. An uncontrolled overflow was feared there.

The fire department has three people from the River worm rescued those who threatened to drown there. According to the Heinsberg district police authority, two men and a woman were on a boat with them Übach-Palenberg (Heinsberg district) on the worm on the way.

In Leverkusen a hospital is evacuated due to a power failure. The action could last until Friday, because emergency services are only available to a limited extent, says a spokeswoman for the Leverkusen Clinic. 468 patients are affected by the eviction. Depending on their state of health, they were also released. Operations, appointments and interventions were canceled. “Some of the medical devices in the intensive care units had to be powered by batteries,” said the clinic. During the night, 12 children and 15 adult patients were transferred to nearby hospitals. Overall, the power supply, which is actually secured several times, is unstable. The trigger was the flood of the river Dhünn. This triggered a short circuit on two transformers.

In Solingen According to the police, an 82-year-old fell and got his head under water. The pensioner later died in the hospital. in the Unna district a 77-year-old also died in the submerged basement of his house. At the in Rheinbach near Bonn The police are now investigating the discovered dead woman, but suspect a connection with the storm.

Im Märkischen Kreis two firefighters were killed on Wednesday. A 46-year-old firefighter was swept away by the water and drowned. Just two hours later, a 52-year-old firefighter collapsed while working in the area of ​​the Werdohl-Elverlingsen power plant. The police said he died despite resuscitation and relief measures.

The Ruhr leads to record floods in many places. So be at Hattingen With 1450 cubic meters of water per second, about 20 times as much water flowed through as the long-term average, says a spokesman for the Ruhr Association. There has not been such a flood since at least 1960. “We have water levels in the Ruhr that are one meter higher than what has occurred so far,” says Ulrich Windau from the flood warning service of the Arnsberg district government. In the weather, the level reached a new high of 7.21 meters, and flood values ​​were never recorded at Hattingen either.

Houses still in danger of collapsing

According to State Interior Minister Roger Lewentz, several thousand citizens were brought to safety from the floods during the flood disaster in Rhineland-Palatinate. Their number is “well into the four-digit range,” he said during a visit to the badly hit spa town Bad Neuenahr-Ahrweiler. In the district of Ahrweiler alone, 13 helicopters were “pulled together”.

Looking at the dead in Rhineland-Palatinate, Lewentz added: “People were almost surprised in bed.” The flood night reminded him of the flood disaster in Hamburg in 1962. Back then, too, the victims were surprised during the night – more than 300 citizens lost their lives.

Also in the district Trier-Saarburg there is immense damage. Hundreds of houses were affected, said a spokesman for the district in Konz. The damage ranged from full cellars to total damage to residential buildings and public buildings such as a sewage treatment plant. The focus is on the Kordel community on the Kyll tributary of the Moselle and the Ehrang district of Trier. In the southern Eifel, four to five places on the Moselle tributary Sauer were also partially flooded.

In cord had emergency services already brought around 100 people to safety, another 60 people should follow in the afternoon and evening. The flood protection in Kordel, which was built after the Kyll had reached a peak of 4.80 meters in 1995, “flooded mercilessly,” said the spokesman, and on Thursday a water level of 7.80 meters had been reached. Thanks to special vehicles from the Bundeswehr, the residents of an old people’s home, some of whom were bedridden, were able to be brought to safety because the access roads were impassable. The drinking water supply in Kordel, which had failed in the meantime, has now been restored.

Thousands of helpers in action

According to its own information, the technical relief organization has more than 2,500 volunteer assistants in action. “Our helpers have been working tirelessly for days in thunderstorms to save human lives, but also to protect infrastructure and property,” says THW President Gerd Friedsam. Although the rain has subsided in large parts, the situation is still tense. The overall weather situation had calmed down a bit on Thursday. But deep “Bernd” was still above Germany and after an often dry start to the day, shifted his focus from the west further east towards the center of the country, including the central and eastern low mountain ranges. There then threatened strong thunderstorms with heavy rain, hail and squalls, as the experts from wetter.de forecast.

The Federal Office for Civil Protection and Disaster Assistance supports the affected regions with satellite images, among other things. “At the request of the states of Rhineland-Palatinate, Baden-Württemberg, Hesse and North Rhine-Westphalia, the BBK triggered the Copernicus service for disaster and crisis management,” said Vice President Thomas Herzog of the German editorial network. Copernicus is the European earth observation program. “The first satellite images from the areas affected by the storm have been recorded this morning. These images will be made available to those involved in crisis management as soon as they are available,” said Herzog.