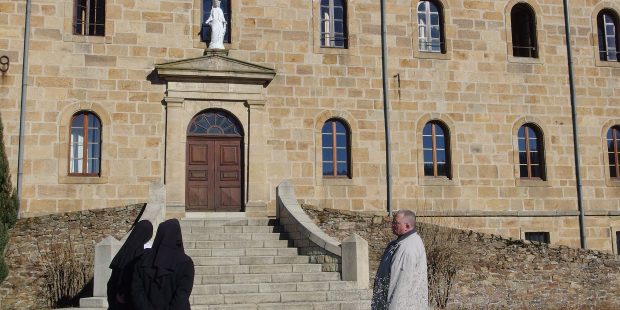 The sisters of Boulaur at Notre-Dame des Neiges!

The announcement of the closure of the Abbey of Notre-Dame des Neiges (Ardèche) last December had saddened many Christians, but that was without counting on Providence! Because the abbey will find a second youth with the arrival of the sisters of Boulaur, in the footsteps of Charles de Foucauld for whom Claire de Castelbajac had a great devotion…

On December 22, the Cistercian monks of the Abbey of Notre-Dame des Neiges announced their departure, with sadness but mature reflection, following the “decline of the forces of the community” and “to heavy loads”. If the decision “taken in peace” was inevitable, Father Hugues de Seréville, abbot of the community since 2002, remained active in finding a replacement. He says he has received 27 takeover proposals, sometimes eccentric and far removed from religious life, while sending, for his part, personalized letters to seven communities likely to take over the magnificent place, perched at an altitude of 1,100 meters, on the town of Saint-Laurent-les-Bains (Ardèche). Among these communities, the Cistercian sisters of Boulaur, in the Gers, a dynamic community of 31 nuns, who regularly welcome new vocations, through the intercession of Claire de Castelbajac. But what the monks probably did not know, but not Providence, is that the sisters had already been thinking for several years about a new Foundation “well before the arrival of our last eight novices”, confides to Aleteia Sister Anne, but the searches did not materialize…

“When our Mother Abbess received the letter from Father Hughes at the end of December, she read it to us in Chapter, and we began to pray in community”, she continues. Then the sisters say to themselves that before making a decision, you have to go and see on the spot! So in small groups, here are the nuns who leave by car to discover the places. “As we cannot leave our cows and our farm, we staggered our departures from the end of January until the beginning of Lent”. Once there, each sister will later entrust it in private to the Mother Abbess, each one will be touched by the beauty of the place and the welcome of the monks. “We felt like brothers and sisters immediately,” says Sister Anne.

The suite is reserved for Aleteia Premium members

Free and without any commitment:
You can unsubscribe at any time

and I benefit from the following advantages

No commitment : You can unsubscribe at any time

Advertising limited to partners of Aleteia

Exclusive receipt of the newsletter “The Vatican Letter”

And you support the media that carries your Christian values

And you support the media that carries your Christian values