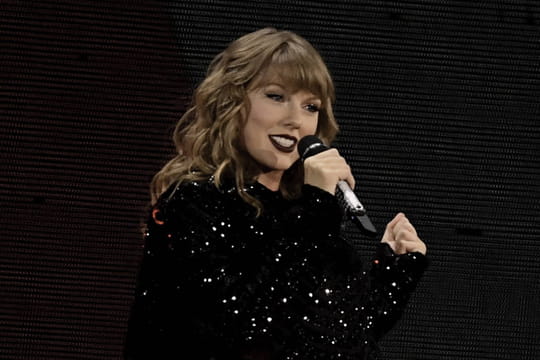 Singer Taylor Swift, who is a hit with her new album, “folklore”, has decided to give the cardigan she wears in the song of the same name to Natalia Bryant, the daughter of the basketball player who died in January 2020.

The gesture did not go unnoticed on social networks. A few days after the release of his surprise album, folklore, Taylor Swift wanted to do a strong act: offer the cardigan she wears in the clip for the song of the same name to the daughter of basketball player Kobe Bryant, who died in January 2020. It is the latter’s wife, Vanessa Bryant, who announced it on social media by posting two photos on Instagram of his daughter, Natalia, proudly showing off the garment. “Thank you very much,” wrote the young woman in another post on her social networks. “I am obsessed with folklore“She adds. Note that this famous cardigan is one of the products derived from Taylor Swift’s new album, available on her site.

A nice gesture for the singer, who breaks all records with folklore : In just 24 hours, the album sold 1.3 million copies worldwide. On Spotify, it became the most listened to disc on the day of its release with some 80 million listenings. Taylor Swift is now ahead of previous record holder Ariana Grande with 70.2 million plays in 24 hours for the album Thank U, Next.

Taylor Swift took less than one after the release of Lover to make a smashing return to the bins. Last Friday, the singer unveiled folklore, her eighth album, which she had announced only a few hours earlier. On the program of this disc, 16 new titles (17 for the deluxe edition in physical version) and collaborations with the folk group Bon Iver, the author and producer Jack Antonoff or even Aaron Dessner, co-founder and multi-instrumentalist of the group of rock The National.

“A brand new album of songs that I poured all my whims, dreams, fears and thoughts into,” wrote Taylor Swift. For her, releasing this album in the midst of the crisis linked to the coronavirus pandemic went without saying. “The times we live in keep reminding me that nothing is guaranteed. My gut tells me that if you do something you love, you should just bring it into the world. This is the side of it. uncertainty with which I can rally. “

Besides the music, Taylor Swift worked on the visuals for her new album and for her music videos. For the first video, that of cardigan, the singer called on Rodrigo Prieto, director of photography, known in particular for his collaborations with Martin Scorsese for The Irishman, Ang Lee for Le Secret de Brokeback Mountain or Alejandro González Iñárritu for Babel. For the album, eight different covers are available. And for fans, on social networks, the hundreds of thousands of comments are almost unanimous: folklore is a masterpiece.