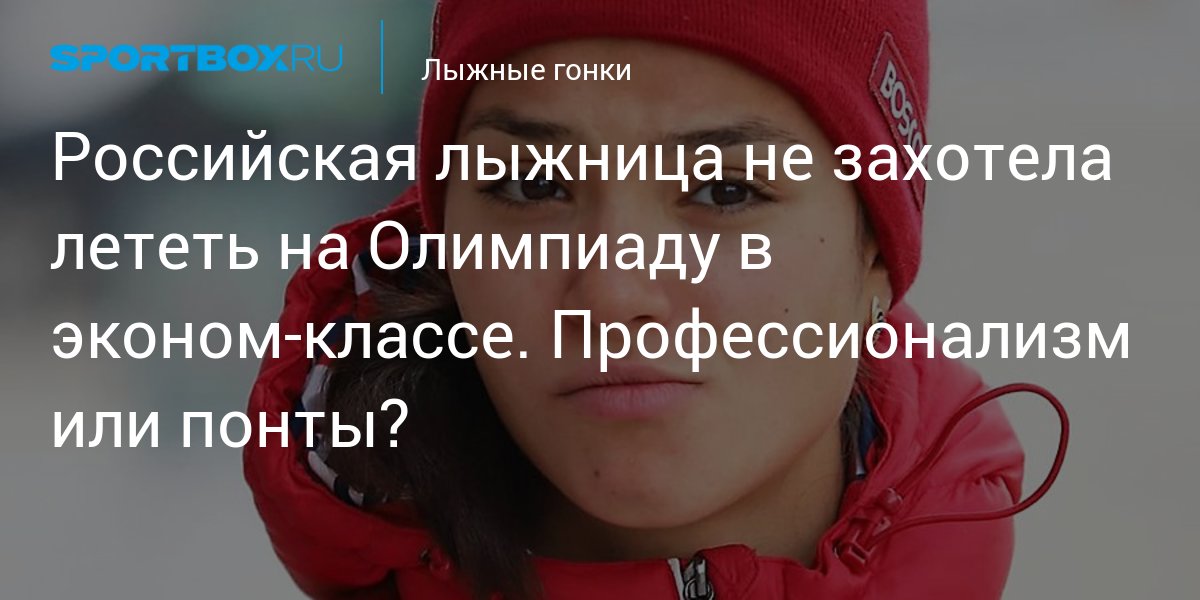 The Russian skier did not want to fly to the Olympics in economy class. Professionalism or show-off?

If the federation does not take care of the athlete, then he must do it himself. Even Guberniev reacted to Stepanova’s act.

Skier Veronika Stepanova still has no great achievements in sports, except for a luxurious victory in the relay at the World Cup. But they discuss it much more often than even the Tour de Ski champion Natalya Nepryaeva.

She even made her flight to the Games in Beijing an event that caused a heated discussion and went viral on social networks and news feeds. The Russian skier was not satisfied that the federation bought her an economy class ticket. But instead of whining and complaining, Nika paid extra for a place in the business out of her own pocket.

Stepanova’s act was not appreciated by everyone. Why is a spectacular athlete accused of arrogance and the habit of a beautiful life?

Where did Stepanova get the money for the “business”?

If we evaluate the situation sensibly, then Veronika acted very logically: she minimized contacts with others and provided herself with comfortable conditions. Still, a 10-hour flight is a difficult test even for a trained organism. Moreover, it must be emphasized that Stepanova pampered herself not for budget money, but for her own. The girl spent the prize money for winning the relay at the World Cup in Lillehammer.

– I am rather indifferent to expensive clothes, jewelry and other ways to quickly spend money, and I don’t have my own family yet. But, unlike most of my teammates, I can imagine very well how hard it is for an athlete to fly 9 hours (I think it’s not an athlete either – I don’t know, I haven’t tried it) – but in “business” you can get enough sleep, which was done, – said Stepanova on your instagram.

Guberniev urged to include Stepanova in the Guinness Book of Records

Many subscribers of the bright skier supported her decision.

You are fantastic and you have a lot of Norwegian fans now! All the best at the Olympics, Stepanova! — writes a user from Norway ro_bjoer.

– Well done! Very smart and professional. This is an investment in yourself, with this approach you will definitely get results. I believe in you,” expressed support litvinov_ei.

“I would even say that this is not a waste of money, but a competent investment in yourself, especially at such an important moment,” iridache appreciated the act.

The Match TV commentator Dmitry Guberniev did not stand aside.

– Nika, you are the first athlete in the country who spent his money on a flight! This is worthy of a Guinness book, – Dmitry ironically remarked.

What is the talented Russian skier reproached for?

At the same time, there is a lot of criticism in the comments under the news about Stepanova’s decision on various sports sites and other social networks. Many do not understand why Veronica published a post, and even compared herself with her teammates. For some fans, the record of the skier gave reason to reproach her with arrogance: they say, she separated from the team for the sake of her comfort. Others accuse the athlete of excessive conceit, and her unwillingness to fly in economy class is called show-off.

After such a reaction, it is understandable why Russian athletes prefer to hide from the fans and keep their actions secret.

See also  DIRECT SANTÉ - Cold: Here is the list of medications to avoid