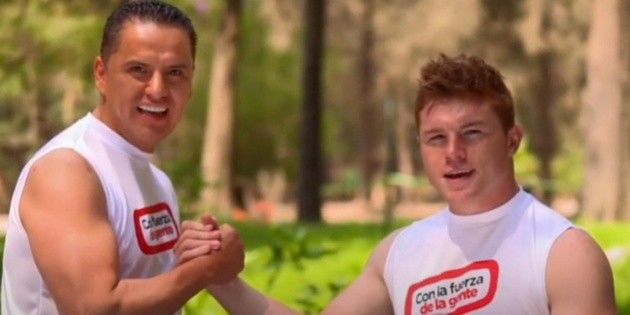 On the morning of this Sunday, June 6, the former governor of Nayarit, Roberto Sandoval was arrested for the crime of operations with resources of illicit origin. The politician is known, among many things, for having a relationship with several famous people, among them Saúl “Canelo” Álvarez.

Through the years, the relationship of the boxer and the former president It has been registered in social and commercial networks and even press conferences.

In 2009, the then municipal president led a press conference in the fight between Saúl Álvarez and Lanardo Tyner where he thanked “Canelo” for taking that fight to the state.

In 2011, the politician’s nexus with “Canelo” caused a stir when the then PRI candidate for governor of Nayarit decided to travel by jet and private helicopters to travel to the Álvarez fight, who, at that time, it appeared in the promotional commercials of the campaign.

At that time, the PAN decided to denounce the candidate for exceeding the campaign spending limit.

Perhaps the most tense point in that relationship occurred in 2019 when the United States Department of the Treasury reported that the Valor y Principio de Dar AC foundation was under investigation. This organization would have received monetary contributions from Álvarez and was used by Roberto Sandoval, former governor of Nayarit, to launder money from organized crime.