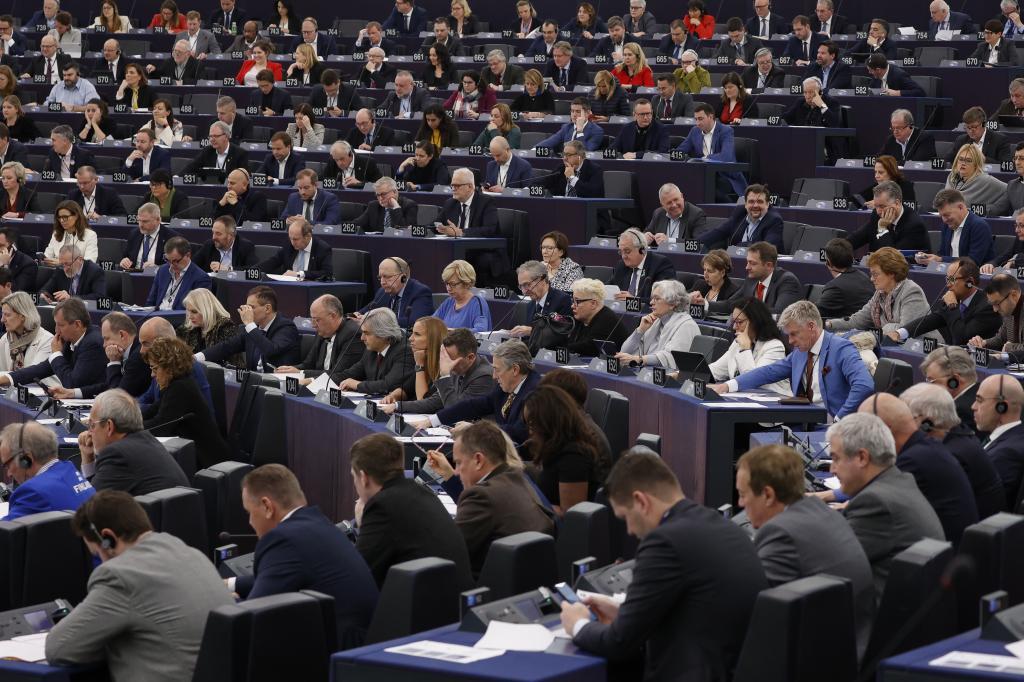 Hard to digest and impossible to explain. The European Parliament has approved this Thursday a resolution, with 356 votes in favour, 32 against and 42 abstentions, urging the Moroccan authorities to “respect freedom of expression and the press, and guarantee those incarcerated a fair trial with due process guarantees, their immediate release and an end to the harassment of journalists, their lawyers and their families.” The first critical resolution with Morocco after the bribery and corruption scandal known as Qatargatebut which also directly involves the North African country.

The incredible thing is that of the 32 votes against, 17 have been from the Spanish Socialist MEPs, the entire delegation present in Strasbourg, despite the fact that their group, S&Ddirected by Iratxe Garca (which is the only one that for that reason has voted in favor), has voted in favor and had encouraged the plenary session not to “let themselves be pressured by Moroccan blackmail”, which in recent days has done a job of lobby very intense. The President of the Government, Pedro Sánchez, will travel to Rabat on February 1 and 2, the first displacement after the recovery of relations last April, when Spain took a turn in its policy towards the Sharia, openly positioning itself with the theses of Mohamed VI. The message has been resounding from the other side of the Strait and for this very reason the instructions from Ferraz and Moncloa to their deputies have been clear, non-negotiable and very difficult for many of them to digest. Of the 21 members of the delegation, 17 have followed the instructions. Three did not participate in the vote because they were in Spain, two for work and one, Mónica Silvana, because after being sanctioned on Monday for workplace harassment she also left France.

The reasons are purely geopolitical, strategic, but the move by a party that always boasts of being resounding on human rights issues is surreal. The leader of the group and person of confidence of Sánchez in Brussels votes in favor after negotiating the text herself with the liberal and left forces, but not all the others, ironically positioning herself with the extreme right forces, the only ones aligned.

From the opposite side, also striking movements of the European People’s Party. They were not part of the drafting of the resolution because after the Qatargate revelations they decided “not to participate in the preparation, negotiations, or voting on urgent resolutions until the measures that adequately regulate them are implemented.” “. Therefore, most of its members have not voted in this case. Those who have done so have opted to abstain, but no one from the Spanish Popular Party has participated.

“The Spanish Socialist Delegation is committed to full respect for human rights and defends dialogue as the best tool for understanding between the parties. Spain maintains a frank dialogue with Morocco on all issues of common interest, such as security, the fight against terrorism, economic and trade relations, the fight against irregular migration and also human rights From responsibility and in favor of frank bilateral relations based on dialogue and understanding, we have voted against this resolution “, they openly acknowledge in the corridors of the Eurochamber. “What the MEPs of the Popular Party have not done, who have absented themselves from the debate and the vote”, point out the same sources of the delegation.

“In relation to the urgent resolution regarding the situation of journalists in Morocco, we express our absolute defense of freedom of expression and information, rejecting any type of persecution of journalists,” the PP respond.

In December, days after the scandal broke out that has led to the former vice president Eva Kailithe United Left MEPs, sira rego y Manu PinedaThey wanted to introduce an amendment to a text that was being agreed upon to condemn Qatar’s interference. If she had gone ahead, she would have also made an explicit mention of Morocco. But with 238 votes in favor to 253 against, it was stopped. The Spanish deputies of the Popular Party and the PSOE voted en bloc to knock it down. The other Spanish political forces, as has happened today, spoke in favour.

The European Parliament has ruled this Thursday on two international issues. On the one hand, it has approved another document, expressing, on the one hand, the full solidarity of the chamber with the democratically elected president. Lula da Silvahis Government and Brazilian institutions and condemns “in the strongest terms the criminal acts” carried out by supporters of the former president Jair Bolsonarowhom he asks to accept the result of the polls.

And immediately afterwards, a second one that urges Rabat to respect freedom of expression and the freedom of the media and to guarantee imprisoned journalists a fair trial with all the procedural guarantees. Specifically, the MEPs call for the immediate provisional release of Omar Rad, Sulaiman Raisuni y Taufik Buachrin, as well as an end to the harassment of all journalists, their lawyers and their families. And there is an express mention of the case of the Spanish journalist Ignatius Chairman and others like him, who have been “placed under digital surveillance, have suffered intimidation and judicial harassment and in some cases have been sentenced to long prison terms”

With 356 votes in favor, the Chamber wanted to denounce how Morocco uses accusations of sexual assault in order to dissuade journalists from carrying out their duties. In this week’s campaign in Strasbourg, the Moroccan delegation used precisely this argument, accusing the deputies who voted in favor of the resolution, agreed upon by the large groups, of supporting “rapists of women.

The text, which is not binding and does not imply that the EU should do anything concrete, demands that the surveillance of journalists be immediately stopped, making express mention of the Spanish program Pegasus. And for this reason, MEPs ask Member States to stop exporting surveillance technology to Morocco, in compliance with the Regulation on dual-use items. And that they use all their influence to achieve concrete improvements in the human rights situation.

What the resolution rejected by Pedro Sánchez’s deputies does expressly ask for, thanks to an amendment from the European Left, is to demand that the institution itself close the door to the Alaouite lobbyists. With its vote, the plenary session recorded its “deep concern over the accusations that the Moroccan authorities have corrupted members of the European Parliament and calls for the same measures to be applied to their Moroccan representatives as in the case of Qatari representatives.” .

During the debate there have been numerous deputies of all colors and countries who have denounced the Moroccan pressure and interference, the emails received these days and that their representatives “run free” through the corridors of Strasbourg, when there is an investigation with numerous evidence about their campaign for years to achieve changes in parliamentary activity in their favor.