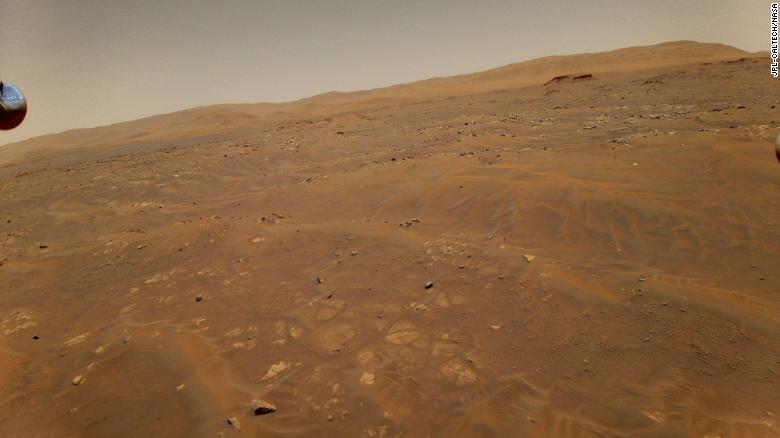 New tour of the Perseverance rover on Mars 1:07

(CNN) — If you’re a robotic rover, June seems like a good time to take a “road” trip to Mars.

Perseverance began drifting away from her Octavia E. Butler landing site on June 1. The Mars rover left the lookout where it captured images and video of the Ingenuity helicopter flights and is heading to another that will reveal some of the oldest geological features of the Jezero crater.

The crater, which housed an ancient lake 3.9 billion years ago, could contain evidence of ancient microbial life, if it ever existed on Mars.

Along the way, the rover will continue to fine-tune and prepare to explore Jezero Crater, testing and refining its auto-navigation and sampling systems. Samples Perseverance collects, which could contain microfossils, will return to Earth in the 2030s.

Since landing on February 18, Perseverance has made some impressive achievements. It has managed to generate oxygen on Mars, has supported the first flights of the Ingenuity helicopter, has captured audio of Mars with its microphones and has taken more than 75,000 images of its surroundings.

“We left the rover start-up phase behind, as well as the landing site, and we got underway,” said Jennifer Trosper, deputy director of the Perseverance project at NASA’s Jet Propulsion Laboratory in Pasadena, California, at a release.

“In the coming months, Perseverance will explore a 4 square kilometer area of ​​the crater floor. This is where the first samples from another planet will be collected to be returned to Earth for a future mission, “said Trosper.

Perseverance officially begins its main scientific mission to study Jezero Crater and reconstruct the geological and climatic history of the area, as well as collect rock and soil samples.

The first hundreds of suns, or Martian days, of the mission will be spent exploring some of the deepest and oldest layers of the bedrock exposed in the crater. Perseverance will begin with the Jezero area that scientists dubbed “Crater Floor Fractured Rough,” as well as Séítah, which means “in the middle of the sand” in the Navajo language. Séítah is full of intriguing features in addition to bedrock, including ridges, layered rocks, and sand dunes.

This image shows the Séítah geological unit on Mars from the 10-meter height of the Ingenuity helicopter during its sixth flight on May 22.

“To do justice to both units in the allotted time, the team came up with the Martian version of an old car club-style map,” JPL astrobiologist Kevin Hand said in a statement. “We have our route planned, complete with optional detours and tagged areas of interest and possible obstructions in our way.”

Hand is co-director of this science campaign with Vivian Sun, planetary scientist and systems engineer at JPL.

Séítah, who is shaped like a glove, is not without its obstacles. The main challenge will be the sand dunes. Perseverance will navigate this area by placing a boundary between the site and the Crater Floor Fractured Rough area. Occasionally, the rover may enter Séítah if specific areas of interest emerge.

“Starting with the ‘Crater Floor Fractured Rough’ and Séítah geological units allows us to start our exploration of Jezero from the beginning,” said Hand. “This area was under at least 100 meters of water 3.8 billion years ago. We don’t know what stories the rocks and cape outcrops will tell us, but we’re excited to get started. ‘

The science team will instruct the rover to collect one or two samples from this area and determine four areas of interest that help tell the story of Mars. This scientific campaign will end once Perseverance returns to its landing site, having traveled between 2.6 and 5 kilometers and having filled up to eight of the 43 sample tubes carried by the rover.

This will be followed by a second scientific campaign in which the rover will travel northwest to the old delta of the river that emptied into the crater.

This unique intersection may contain evidence of carbonates or minerals that can preserve signs of ancient life.

And the most exciting? Perseverance is just beginning.