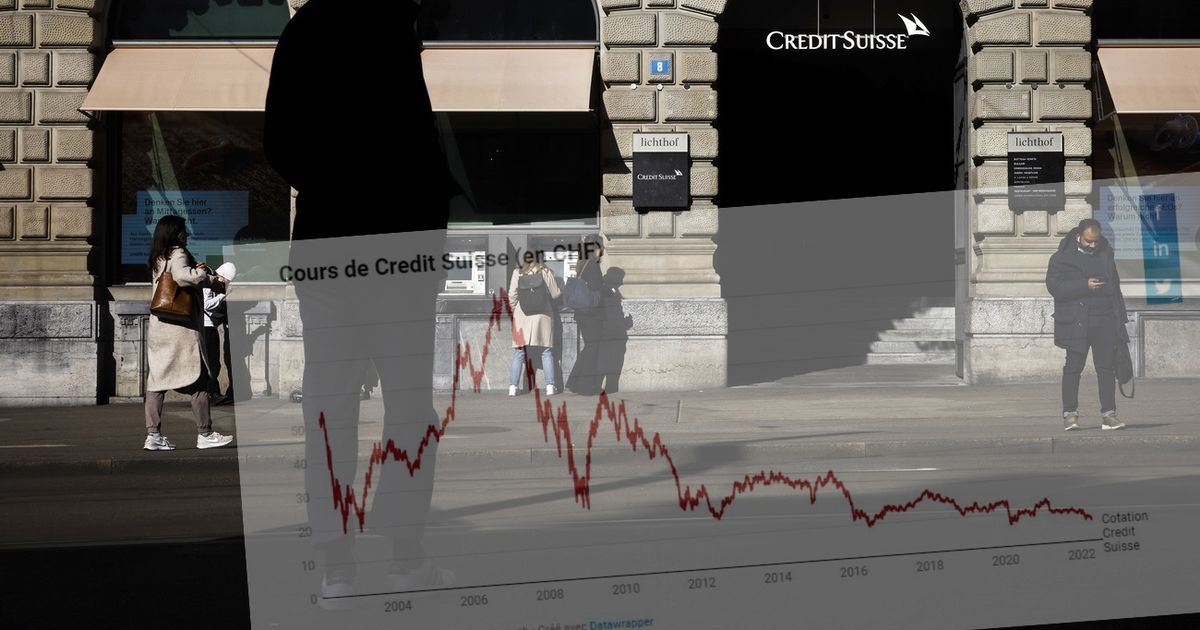 The pans of Credit Suisse that make it easy prey – rts.ch

Credit Suisse is considered one of the two Swiss banking giants, but it deserves this title less and less. Its stock market value has collapsed for years, to the point of being far behind its competitor UBS. The Swiss number two would even have become a potential prey.

The bank founded in 1858 by Alfred Escher is no more than a shadow of itself, whereas it rivaled almost equal to equal with UBS there is little. This Friday, during its general meeting, its shareholders refused to discharge the board of directors. A first in the history of Credit Suisse, which legally engages the responsibility of the directors and the board of directors for all the decisions taken during the 2020 financial year.

Decisions, but also investments made under the presidency of Urs Rohner, made him lose all confidence with the shareholders.

>> The details of the 7:30 p.m. about the general meeting of Credit Suisse:

The latest reasons for such mistrust date back to the debacle of the Archegos hedge fund and finance funds operated with bankrupt Greensill Capital. The Greensill affair, then the bankruptcy of Archegos, whose founder has just been indicted in New York for fraud, have caused the bank an estimated loss of between 5 and 10 billion francs. These two cases are still the subject of several investigations by the Swiss financial market supervisory authority (Finma).

This debacle is only the latest episode in a long series of pans dragging the second bank of Switzerland for fifteen years. Fines amounting to billions of francs, the spinning mill affair, or even dubious relations with the Bulgarian mafia, whose trial began in February, not to mention the revelations of the international media consortium, called “Swiss Secrets “.

To these scandals was added at the start of the year the departure of the controversial President António Horta-Osório, who resigned after having broken the quarantine rules. On Tuesday, four members of the group’s management were dismissed for their poor risk management, including Romeo Cerutti, the legal director.

These cases which are linked and which undermine the confidence of investors are also reflected in the value of the stock market. In 2015, the arrival of new boss Tidjane Thiam gave shareholders hope to see the stock go up. But the hope was short-lived and the curve just stared at the floor. The action Credit Suisse, which traded up to 87 francs in 2007, is worth only 6.70 francs today.

In market capitalization, Credit Suisse is worth only 17.8 billion francs, far from the nearly 90 billion that the bank was worth before the subprime crisis. For François Savary, investment manager at Prime Partners, at this price, the observation is clear: “it’s easy prey”.

Despite the annual loss of 1.57 billion francs in 2021, Credit Suisse contains a nugget for a possible buyer: “Wealth management is extremely interesting for competitors who want to strengthen themselves in this field of activity”, affirmed the analyst, in a 7:30 p.m. topic broadcast in February (see below).

Wealth management weighs more than 800 billion funds under management for Credit Suisse, which remains one of the world leaders in the sector. Enough to arouse envy, despite its risk management problems.

By analyzing the title of Credit Suisse, Eric Dor, director of economic studies and professor at the IESEG School of Management in Paris and Lille, aligns himself with the opinion of François Savary. The bank can “be acquired at a good price and may attract the envy of certain large European banks, which are open to cross-border consolidation”.

According to him, banks like Deutsche Bank in Germany or UniCredit in Italy could show their interest.

Shaken by its mistakes, by the financial crises and by the arrival of fintechs, the number two Swiss bank could thus pass into foreign hands. A takeover in Switzerland seems unlikely, according to the two experts, because a merger with UBS would pose problems for the regulator in terms of competition. If there was a takeover, the Swiss bank would probably go into European hands.

>> Review the 7:30 p.m. explanations on the Credit Suisse share: