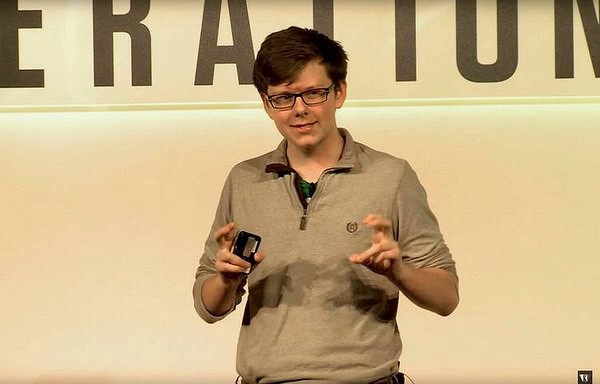 Cryptomillionaire Eric Finman created the Freedom Phone smartphone, in which none of the applications track users. This is a compact 6-inch monoblock costing around 37 thousand rubles, and it can be ordered in any city in Russia. However, Finman, for unknown reasons, hid almost all the details about his electronics and firmware.

21-year-old crypto millionaire Eric Finman (Erik Finman) has announced the “uncensored” smartphone. The project was named Freedom Phone and went on sale at a price of $ 500 (37.1 thousand rubles at the Central Bank rate as of July 16, 2021). The website of the smartphone states that this is the only mobile phone in the world that does not track its owner. This is what makes it unique.

According to Finman, there is not a single application in the mobile phone that would somehow monitor users. The software available in the set does not collect personal data, does not control location, does not intercept traffic, etc.

At the same time, Finman claims that in terms of its software and hardware capabilities, Freedom Phone is as close as possible to the smartphones on the market based on Android and iOS. That is, Finman points out literally one difference between Freedom Phone and them – he does not follow anyone.

O Freedom Phone, despite the upcoming release, almost nothing is known

Eric Finman, according to his own claims, became a crypto-millionaire thanks to the fact that he bought 1000 bitcoins back in 2011, when he was 11 years old. How many bitcoins he has now is unknown, but even if their number has not changed since then, Finman’s fortune is currently $ 31.6 million. We add that Eric Finman is a supporter of the former President of the United States Donald Trump (Donald Trump)

Deliveries of the smartphone to customers will begin in August 2021.

Eric Finman launched the Freedom Phone official website, replete with Buy buttons. However, for some reason, the millionaire decided to hide all the specifications of the smartphone both from buyers and from the public in general.

The only thing that is known about the smartphone is that it is quite compact by modern standards. The diagonal of its screen is exactly 6 inches, which is less even in comparison with the not the largest Apple iPhone 12 by 6.1 inches. 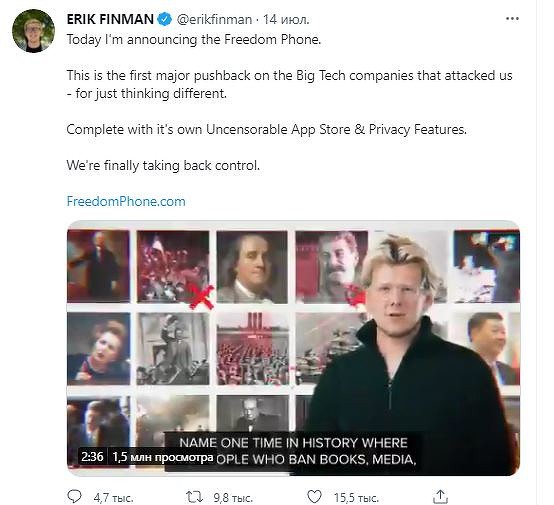 Finman also mentioned a “great” camera, but did not elaborate on how wide the capabilities of its sensors are. Separately, the site notes the large capacity of a regular drive, but without specifying the number of gigabytes. All other parameters of the mobile phone are still secret.

Eric Finman said that the complete absence of censorship and surveillance of the Freedom Phone smartphone is provided not only by a set of applications, but also by the operating system installed on it. It was named FreedomOS, but the developers do not specify if it was written from scratch. Its origins are generally unknown, and it may well turn out to be just one of the many Android skins that any major smartphone manufacturer has.

Freedom Phone looks like a regular Chinese smartphone for $ 150

The fact that Freedom Phone runs on Android is indirectly indicated by one of the few photos of the device published on the corporate website. On the screen of this smartphone there is a Telegram application, available, if we take mobile platforms, only for iOS, iPad OS and Android. And since Apple does not allow anyone to install its OS on devices that have nothing to do with it, there are few options.

Why after the end of the pandemic, clouds will be in demand even more than before Eric Finman also announced the existence of its own application store under FreedomOS. This is also not a novelty for Android – for example, Xiaomi and Samsung have their own marketplace.

There is no FreedomOS in the list of supported Telegram platforms

Finman admitted that programs might appear in his app store, which will still have tracking functions. To do this, FreedomOS has an option that warns of attempts to collect and leak personal data.

According to data from the corporate website Freedom Phone, this smartphone is designed to work primarily in the United States. The list of supported carriers includes Verizon, AT&T, Sprint and T-Mobile.

Freedom Phone is available for ordering to Russia

However, it also says that other North American telecom companies, as well as operators operating in other regions of the world, will be supported. In theory, this means that you can use Freedom Phone in Russia as well.

CNews editors made sure that not only Americans, but also Russians can order Freedom Phone. Russia is on the list of countries.

However, Freedom Phone will not cost the Russians $ 500 at all, as stated on the website. In addition, you will have to pay for delivery, which will be $ 61 (4520 rubles) or $ 86.33 (6400 rubles), depending on the method of sending. Payment is possible via PayPay or Amazon Pay, delivery times are not indicated on the website.

Delivery cost does not depend on the city of residence. CNews editors made sure that residents of, for example, Voronezh and Magadan will pay the same amount over and above the price of Freedom Phone itself.