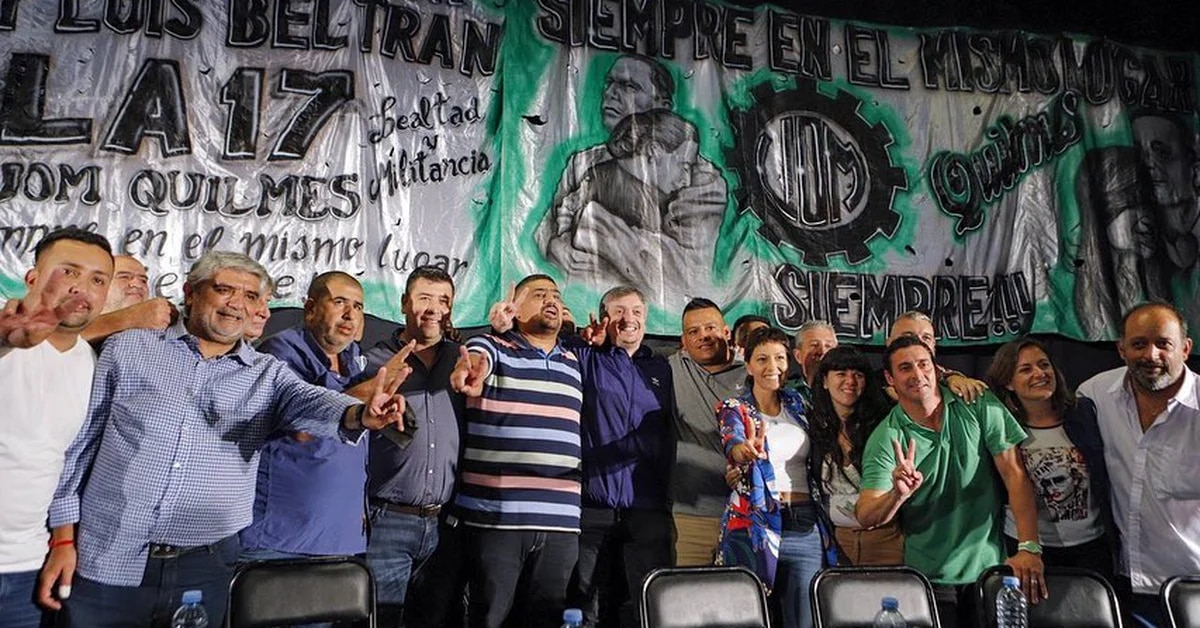 The official intern takes to the streets: on May 1 there will be two massive acts with claims to the Government

The leader of La Cámpora, Máximo Kirchner, with the head of the UOM, Abel Furlán, at one of their last union summits

President Alberto Fernández will once again receive messages and demands this weekend with two massive acts on the part of Kirchnerism and social movements related to the Frente de Todos, two of the sectors of the coalition that have a critical view of economic management. This time, the catalyst for the proposals will be the commemoration of International Workers’ Dayin memory of the “Chicago martyrs”, the group of anarchist trade unionists who were executed in 1886 in the United States for demanding the reduction of the working day from 16 to 8 hours.

The first entry will be held this Saturday by the leader of La Cámpora and president of the Buenos Aires PJ, Maximo Kirchner. The national deputy summoned related leaders of the CGT, in character of the union branch of Peronism, to a plenary session to discuss “labor issues” and “current conditions of workers” in the city of Baradero.

The meeting, scheduled for 10 a.m. at the premises of the Luz y Fuerza union, will be closed by Máximo Kirchner, who has been challenging the policies of the Minister of Economy, Martin Guzman, since he promoted the approval of the agreement with the International Monetary Fund (IMF) in Congress. As anticipated Walter Correaformer national deputy and head of the Tanners Workers’ Union, the expectation is to bring together union leaders from the 135 districts of the province of Buenos Aires.

Kirchnerism has long sought to establish a framework of alliances with union leaders on the rise and who are historically distanced from the long-lived leadership of the CGT leadership. Correa is one of them, but not the only one: in that saga the deputy is noted vanessa sileywhich this Tuesday obtained union status in the City of Buenos Aires in the Sitraju judicial union.

From the act it is discounted that they will participate Abel Furlanwho recently won the election of the Metallurgical Workers’ Union (UOM) to Antonio Caló, and the deputy Hugo Yasky (CTA), Robert Baradel (Suteba), Omar Plaini (Canillitas) and Esteban Sanzio, first leader of the Transport Mechanics and Allied Trade Union (SMATA) to be elected mayor of a city. The presence of Paul Moyanoof closeness and greater affinity in recent times with Máximo Kirchner.

Correa announced on his social networks that during the plenary “It will be debated in commissions with different thematic axes: work, wages, prices, IMF, health and safety and occupational hygiene”. That is to say, part of the agenda promoted by Kirchnerism at the national level and of which Vice President Cristina Kirchner has made her critical gaze explicit on several occasions.

In his last appearances, Máximo Kirchner – together with other leaders of La Cámpora, such as the Minister of the Buenos Aires Community, Andres ‘Crow’ Larroque-They did not skimp on criticizing the government’s management and, in particular, the measures carried out by the Minister of Economy, Martín Guzmán, after the agreement with the IMF and the latest record inflation rates. In that repertoire of proposals, and with the dialogue cut between Cristina Kirchner and Alberto Fernández, is the request for the institutionalization of a decision-making table so that they have the support of all the sectors of the coalition in the critical definitions of the Government. 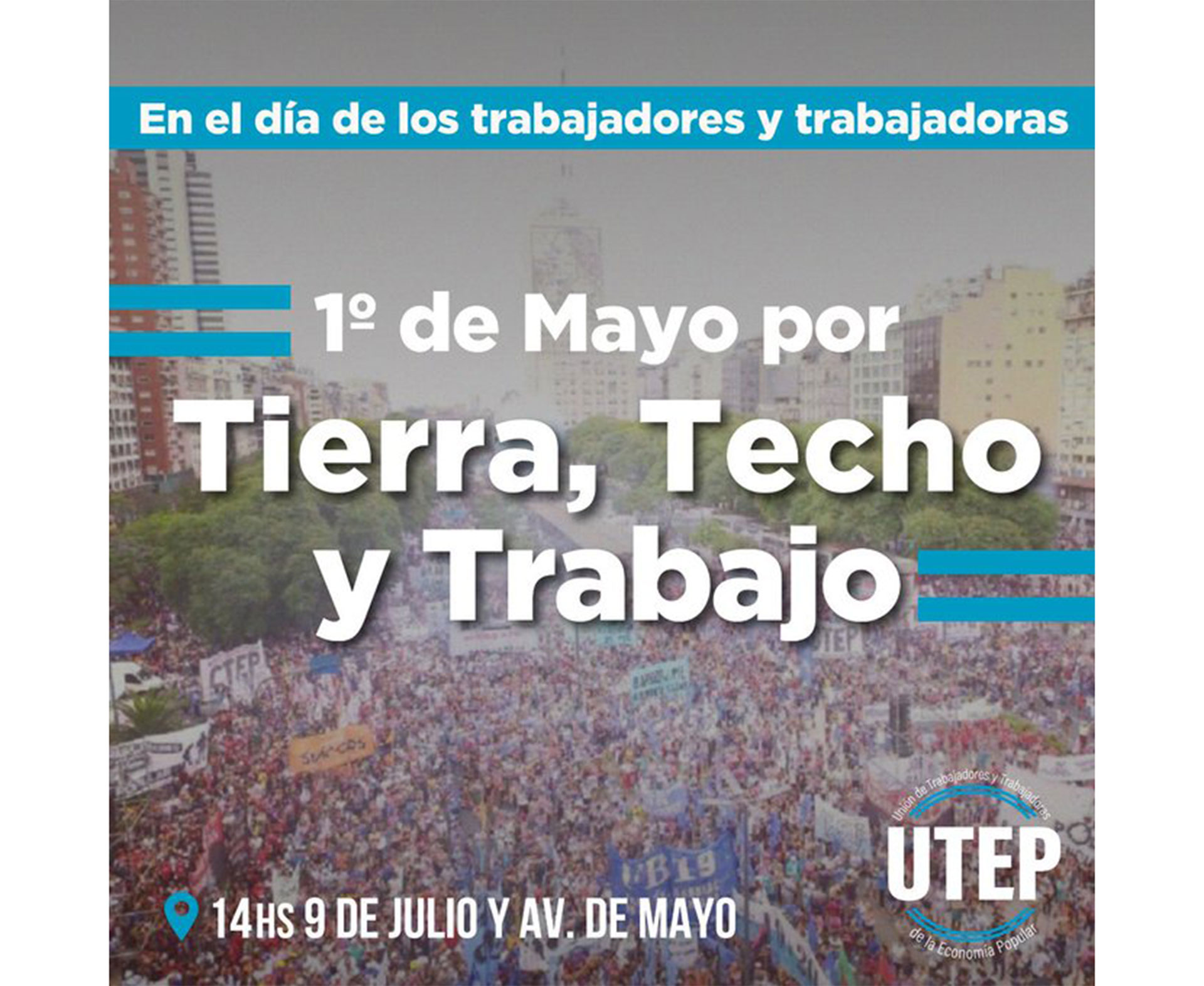 The call of social movements

On Sunday, meanwhile, the social movements that organically belong to the Frente de Todos will return to the streets to carry out a “massive” show of force in downtown Buenos Aires, with the aim of promoting a legislative agenda with their own projects such as the Law for Land, Roof and Workthe Packaging Lawthe Wetlands Lawthe National Emergency Law on Gender Violence, among other. A set of initiatives that, since the departure of Máximo Kirchner from the leadership of the bloc of Deputies and the deepening of the internal crisis in the coalition, remain paralyzed or without news.

The call is promoted by the executive secretariat of the Union of Workers of the Popular Economy (UTEP). The starting point is Avenida 9 de Julio and Avenida de Mayo, starting at 2:00 p.m. The leadership of this sector, which represents the “atypical” work of informal self-employed workers and members of work cooperatives, have mixed loyalties, but converge in the same union. This grouping includes the Avoid Movement y We are-Barrio de Pieclosest to Alberto Fernández, and the other two majority organizations, the Movement of Excluded Workers (MTE)of which Juan Grabois is a reference, and the Classist and Combative Current (CCC) by Juan Carlos Alderete. 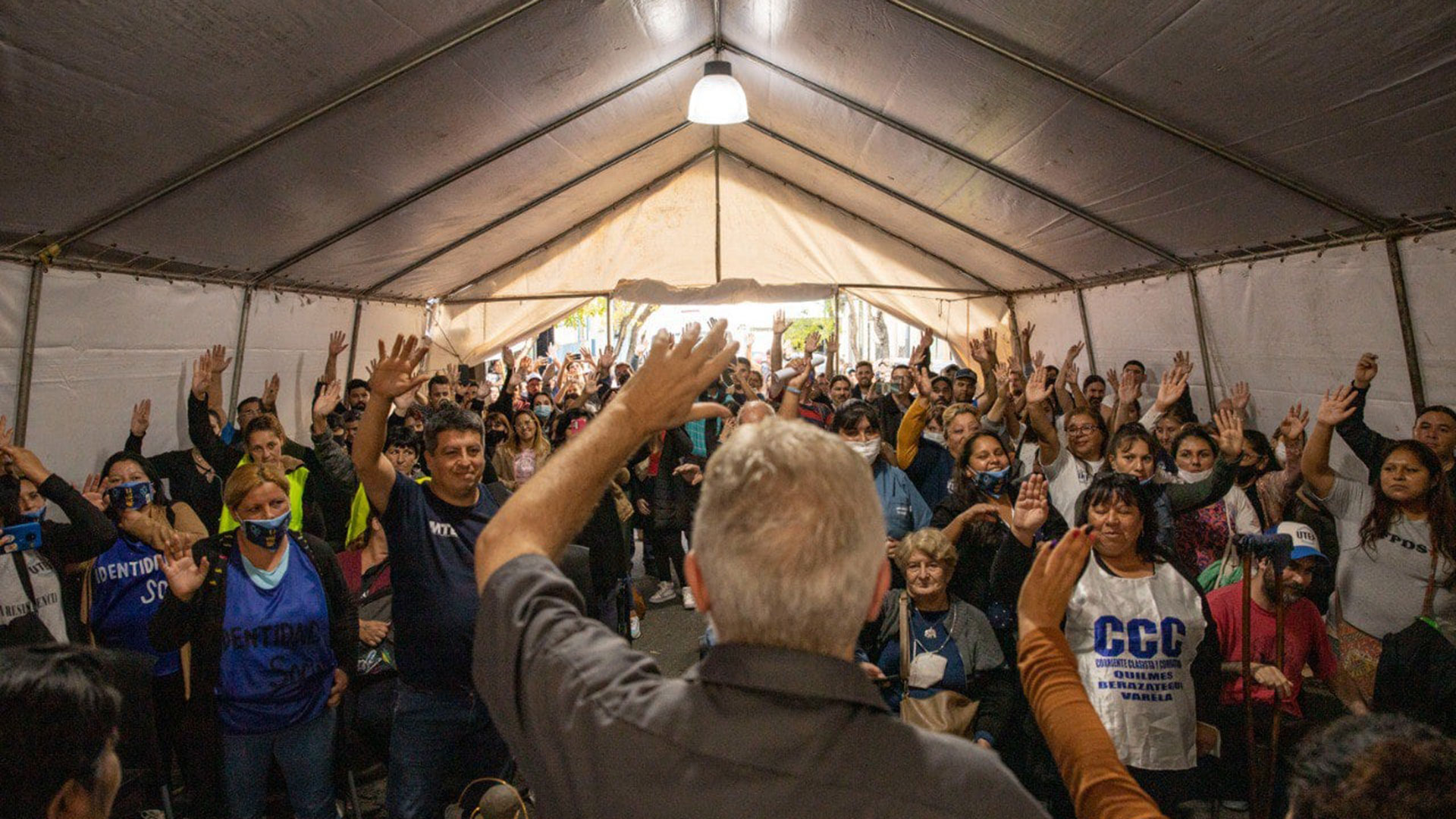 Esteban “Gringo” Castro, general secretary of the UTEP, puts the concentration of May 1 for consideration

In the planned mobilization, the leaders will point out to support the Government so that it advances with the “unexpected income to pay the internal debt” project, which the details of the initiative are not yet known and was announced by Martín Guzmán, and is promoted the sanction of the laws promoted by the organizers of the popular economy. “That fight finds us united to all the popular movements, this is not a palace disputethis is deeper, it is about confronting those who permanently win at the cost of social rejection, and do not care about poverty and inequality”, the organizers pointed out.

Although the call was conceived in its beginnings as a march in support of the Government, it is not ruled out that there are critical voices and speeches of impatience from the podium, given the advance of the inflationary spiral.

“When are those who have the most going to pay? When are we going to stop discussing poverty to discuss the obscene wealth of the 1 percent of the population? When we discuss prices, when we talk about the difficulties of reaching the end of the month, we talk about the usual living, those who took it away even in the worst moment of the pandemic, “he said. Dina Sánchez on the call, which integrates the same space as Juan Grabois, an ally of Máximo Kirchner. “I think we have the task of making visible the debt they have with us, but fundamentally with us, the Workers of the Popular Economy who put and put the body, but we continue without being recognized.”

In addition to the organizations that lead the UTEP, the National Movement Octobers will be present, led by Parlasur deputy Gastón Harispe; the Neighborhood Front December 19 and different fractions of the Liberation Territorial Movement (MTL).

“Albertism” will also have its own activity for May 1. It will be before the weekend, in the municipality of Tres de Febrero. This Thursday at 7:00 p.m., at the Almagro micro-stadium, there will be an act of recognition for the workers of the popular economy led by Daniel Menendez, Undersecretary for Integration and Training Policies of the Ministry of Social Development and belonging to the organization Somos-Barrios de Pie. Along with him, the minister of the area will participate, Juanchi Zabaletathe former Minister of Defense, Agustín Rossithe national deputy, Victoria Tolosa Paz y Fernando “Chino” Navarro, Secretary of Parliamentary Relations of the Chief of Cabinet. They are all leaders aligned, without hesitation, to the management of the President.

“Recognition will be given to the workers who carry out different productive units throughout Tres de Febrero on the eve of a new anniversary of the first of May. It is essential to continue strengthening this path by accompanying a Government which has employment and production as its first priorities on its agenda”, said Menéndez in the preview of the official activity.

The militant sector that brings together the organizations of the “popular economy” differs from the opposition picketers who have occupied downtown Buenos Aires in recent months, such as the Polo Obrero and the ‘Unidad Piquetera’ block‘, which carried out actions with camps, marches and actions demanding an increase in social aid. These groups are organic or related to the Left Unity Front (FITU), which called for a gathering in the Plaza de Mayo at 3:00 p.m. to carry out an important act with slogans such as the rejection of the “pact with the IMF and the adjustment” and in demand for “salary recovery and a six-hour day.” The two big calls, the one from UTEP and the one on the left, will be close by, a few blocks away.

From the Trotskyist camp, the posting for International Workers’ Day is a recurring postcard every year. Has as confirmed speakers Nicholas del CanoRuben “Chicken” Sobrero, Raul Godoy, Romina del Plaand the closure by deputy Myriam Bregman. Eduardo Belliboni, the piquetero figure who has drawn attention since March due to the mobilizations at the Ministry of Social Development, will also speak.

In the middle of the internal government, the senators of the Front of All will give a gesture of unity to bridge the gap between Alberto Fernández and CFK
Kirchnerism redoubles its offensive against Guzmán for managing the economy and speaks of a completed cycle
The opposition is unified behind the Single Paper Ballot and takes an uncomfortable debate for the ruling party to Congress