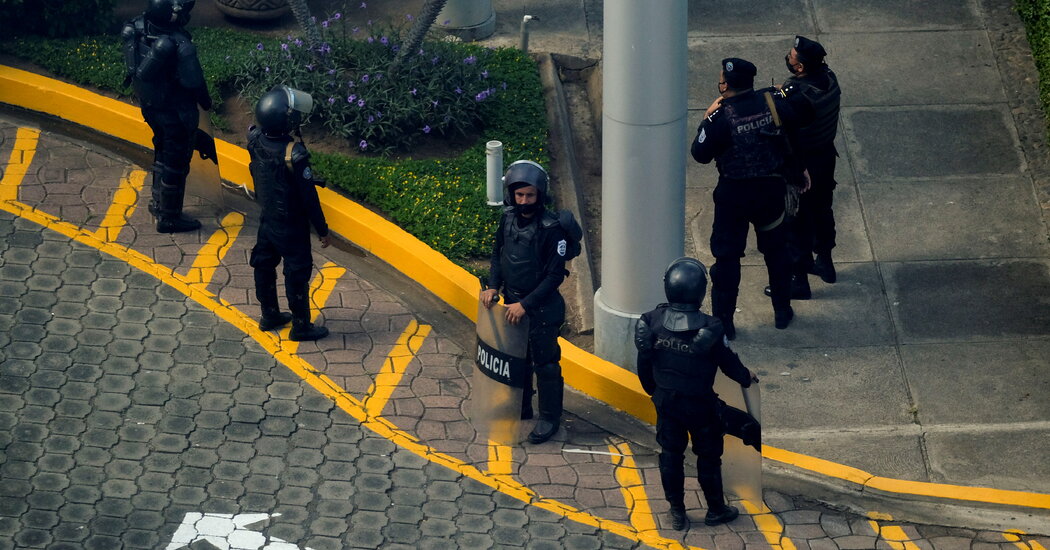 MEXICO CITY – The Nicaraguan government prevented a New York Times journalist from entering the country on Thursday amid a nationwide offensive against the media and civil society in the Central American nation.

Anatoly Kurmanaev, who covered current affairs in Venezuela for several years and recently started working at the Times office in Mexico City, was notified of the cancellation of his ticket to Managua by the airline he was traveling on, hours before he took off. the flight, after the Nicaraguan authorities refused to allow him to enter the country. Kurmanaev had complied with all the legal and health requirements demanded by the Nicaraguan authorities.

“This is an example of the increasing challenges journalists face around the world in their role in ensuring a free and informed society,” said Michael Slackman, editor of the International section of the Times. “Attempts to silence journalists should be of concern to everyone.”

The incident with Kurmanaev seems to evidence the escalation of government attacks against independent media, amid the repression of President Daniel Ortega, who returned to power in 2007 after leading the revolutionary government of Nicaragua from 1979 to 1990.

More than a dozen opposition politicians, business executives and civil society leaders have been detained in recent weeks before the November 7 general elections, in which Ortega is seeking his fourth presidential term.

On Sunday, the government included 13 Nicaraguan media outlets – among which are the country’s most important publications – in a criminal investigation targeting opposition leaders for alleged money laundering, treason and “seditious conspiracy.”

In recent weeks, prosecutors have questioned more than 20 journalists in connection with the case. Human rights activists and reporters have denounced that the investigation is an attempt to eliminate independent news coverage in the country.

At least one of the journalists questioned, María Lilly Delgado, a correspondent for the US network Univision, was informed by prosecutors that she was being investigated, although the authorities did not specify the charges.

The money laundering investigation focuses on opposition leader Cristiana Chamorro, who until recently was the head of a local freedom of expression organization that received US funds. Chamorro was placed under house arrest this month, just hours after announcing her plans to compete against Ortega in the next election.

The recent attack on freedom of expression appears to exceed the repressive strategy deployed in 2018, when the police brutally put down massive protests against the Ortega government. At that time, most of the international media, including the Times, were able to enter the country to cover the unrest.

In October, the government passed a “Cybercrime Law” that allows authorities to jail any journalist for publishing what they consider to be “fake news.” Since then, three Nicaraguan journalists have been threatened with the law and some reporters have gone into hiding.

Press freedom organizations are increasingly concerned about the crackdown that threatens to turn what was already one of the region’s most restrictive media environments into a news dark zone, as the political crisis reaches its climax.

“The Daniel Ortega government has resorted to increasingly outspoken tactics to silence critical voices,” said Natalie Southwick, program coordinator for Central America, South America and the Caribbean at the Committee to Protect Journalists. “Denying entry to international reporters shows that the Nicaraguan authorities are redoubling their efforts to limit access to information and control the story.”

See also  MINISTER BISONÓ - The Government will maintain the fuel subsidy until it is possible, says Ito Bisonó

This week, the crackdown on the opposition reached the highest levels of the business elite that was ever in favor of the Nicaraguan government. A top banker and former Ortega collaborator was arrested Tuesday, and banking authorities froze the accounts of 13 prominent business executives on Thursday.

“Political repression is underway in Nicaragua of a type that should be unthinkable in this hemisphere,” said Bradley A. Freden, a United States envoy at the Organization of American States, following the passage on Tuesday of a resolution condemning the repression.

The government did not express a reason for denying Kurmanaev’s entry. After his ticket was canceled, the reporter contacted Vice President Rosario Murillo, Ortega’s wife and government spokeswoman, asking to be allowed in. She replied with an email saying only, “Thank you for your interest.”

The intimidation of journalists in Nicaragua occurs as governments around the world increasingly decide to repress dissent and freedom of expression.

On Thursday, Hong Kong police arrested five executives of the Apple Daily, a pro-democracy newspaper. On Wednesday, a freelance reporter working for the Times was released from a Zimbabwe jail, three weeks after his arrest, on charges of improperly aiding two Times journalists while reporting on the country.

Last month, Belarus arrested a dissident journalist after forcing the landing of a Ryanair flight traveling through the country’s airspace. In March 2020, China said it would expel American journalists working for the Times, The Wall Street Journal, and The Washington Post.