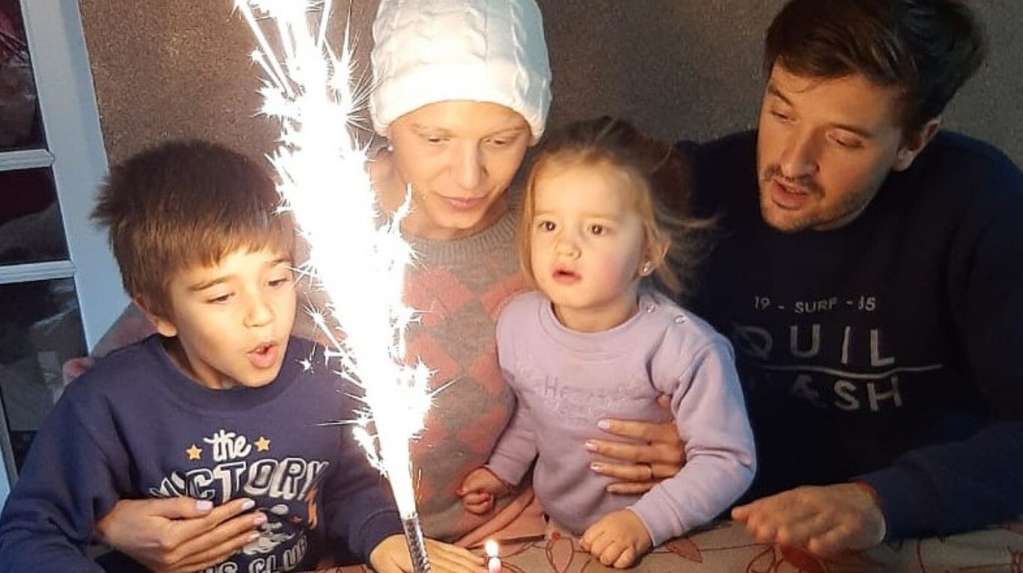 “Woman, mother, doctor. And since June 2020 I have also been an oncology patient. My name is Magalí Etcheverry, I am 31 years old. I write to heal and healthy writing. And you? I invite you to join me ”.

On the other end of the phone you can hear the last sip of mate in the morning and a crying baby. They are few seconds. Magalí takes advantage of that space to tell that since he went on leave and spends more time at home, everything has changed. That at first he idealized those days with his own and that, as the months went by, he learned to balance himself. She has been battling breast cancer for a year that has metastasized to the liver and that it is weaker than normal, but not fallen. This is also part of your presentation.

A fight that only those who suffer from it know. An emotional seesaw no one is prepared for. “This writing was always in me, but I never developed it for reasons of time. Before being diagnosed, she was a doctor and a mother. And unfortunately one tends to postpone what they like ”, Magui tells TN.com.ar.

She is married to Tomás and is the mother of Galo (6) and Juana (2). His blog opens the doors of his world: “Now, with life in other colors, I take the time and I love to sit down and write”. His stories are brief but profound. In one of them he reflects: “This is my life or at least an important part. If I would go back just not to live it? I do not know. I do not choose, but I do not deny”.

// Seven months pregnant, she was infected with COVID-19, she had a cesarean section to save her baby and after 28 days in a coma she was able to meet her

“The first thing I did when I had cancer was tell everyone. This from Putting it into words served to overcome something that is very difficult. Many emotions happen to me that I can handle better when I write them, ”explains the doctor from La Plata. And she says: “I was diagnosed in June 2020. My world fell apart, I was very overwhelmed for a month. I sensed it from knowing my body. My second daughter was one and a half years old and I was breastfeeding. I was wondering how could it be that a tit I was feeding got sick”.

“On June 19 of last year I had a biopsy and on July 3 they informed me that I had metastases in the liver. It was the worst part of the diagnosis. They still haven’t been able to operate on me because I need to heal my liver first. There I stopped working, a little because of the treatment and a little because of the pandemic. He was not doing chemo at that time, he was much calmer, but he was not allowed to go to the hospital because he was a risk patient, “he recalls.

Magalí began a narrative course and feeds on a friend who is a literature teacher, who constantly encourages her and corrects her texts. “He asks me what I wrote this week and he pushes me to do a book. I know that I can help a lot of people, because little is said about living with cancer. My disease is in an advanced stage, there is treatment – which is working – and I’m doing well, but the doctors tell me from the beginning that I live with this as a chronic disease, “he says.

After acclimating to your new days, the neonatologist doctor modified her diet and that of her family. “A lot of fruits and vegetables and less meat in the week,” he reveals. He also dabbled in reiki, yoga, and meditation.

“It was very hard to stop working. At first I lived with that attitude of ‘how nice it is to be at home’. Then he wanted to kill me. Medicine makes you socialize, you talk, you see people. And now she was alone with the boys at home. But I started looking for the enjoyment of the everyday already calm me down with self-demand”, Says Magalí.

Writing became part of the necessary routine. Sit down and dump into an empty document those ideas that are sometimes vague and the next day they disappear with the delete keyboard. His greatest inspiration occurs during chemotherapy, as he observes other patients and sees on their faces looks that he recognizes. The paradox also occurs there: that is the only moment in which Magalí cannot write.

“With issues of the pandemic I did not see anyone and now I make a little more plans because I am vaccinated. I also work a lot with the psychologist on the issue of fear. The fear is in the controls and in the diagnoses, they are what bring you closer to death, to the finitude, to see the end up close ”, he says.

And concludes: “I am very afraid of death. The first thing I thought is that my children were going to be left without a mother, why life is so unfair. But fear is irrational: no matter how much one knows that chemotherapy works, that the tumor is getting smaller, the fear will remain ”.

Regarding his intention to publish a book, Magalí assures that his search will be directed on this experience, on self-fiction. On Instagram she dedicated an image to her husband with a text that defines her way of narrating: “I told you that we had to get married on February 11 and you believed me. He knew that changes were coming soon. So you let me feel beautiful with braids, as I always dreamed of, fresh and comfortable. One more demonstration of this love that can do everything. Since I’ve known you, you’ve asked me to let my hair down and give it a little more love. I never made it. But now that this little piece of me is leaving, I am not going to deny that it makes me nostalgic, that I have to embrace this me who gives me back the mirror “

“I fantasize that every hair I lose is a day of life that I gain and I am amused, because with the amount I handle it would be eternal, although I would like it to be real to sign without hesitation, “he said in the publication.

“I have no major problems with the image, what I do It bothered me a lot was when my eyelashes and eyebrows fell out. As soon as it began to fall, I told my children that it was because of the remedy. My oldest boy told me that he didn’t want to see me bald. Luckily they did not see me sad and he is naturalized with the family, ”Magalí tells this medium.

She says that when she renewed her ID, she had to take off her headscarf and appear bare in the photo: “When I grow back I’m going to take it out again.”

Magalí does not cry in any part of the talk. His strength runs alongside the obstacle that modified his plans but he did not see her fall. She puts it into words, through her experiences, so that others have the same hope that she clung to from the beginning. It is her strength, the one that her children receive, through her smile, every morning when she prepares breakfast for them.