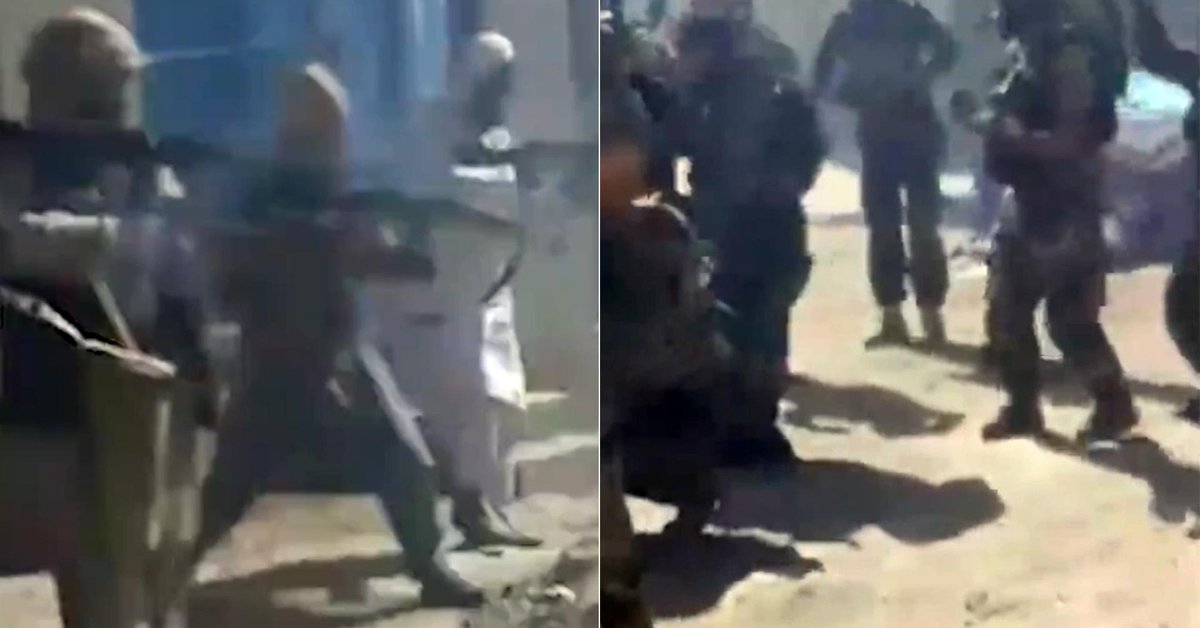 Massacre of the Taliban in Afghanistan. SENSITIVE IMAGES

The Taliban, who carry out an impressive offensive in Afghanistan, they executed several soldiers of the Afghan Special Forces who had surrendered and were unarmed, in a war crime that casts down the propaganda of the insurgent group, which pretends to show itself as a legitimate force to govern the country.

The murders took place on June 16 in the city of Dawlat Abad, province of Faryab, near the border of Afghanistan with Turkmenistan and were recorded by a video obtained by the specialized media Works 530 Y verified by CNN, who also spoke with witnesses to the episode.

The Red Cross also confirmed that the bodies of 22 Afghan soldiers were recovered.

According to the witnesses cited by the American media, Afghan Special Forces Ktah Khas soldiers (KKA, the Kabul government nationwide counterterrorism unit) they were forced to surrender when they ran out of ammunition after being surrounded by Taliban fighters in a fierce battle for control of the city.

Although Taliban propaganda assures that voluntary surrender is a “safe option”, the video shows the insurgents who, after grouping the soldiers together, begin to shout Allahu Akhbar and they shoot point-blank with automatic weapons.

The Afghan military were still equipped with the helmet Ops-Core Future Assault Shell Technology (FAST), a combat helmet used by special operations forces, while the Taliban carry the soldiers’ weapons, as seen in the video.

The weapons appear to be carabinas M4 with foregrip, IR laser and ACOG-style optics that the United States delivered to the Afghan Special Forces.

The video appears to unequivocally contradict Taliban propaganda, who are promising Afghan soldiers that, if they surrender, they will be treated humanely and even receive allowances to return to their places of origin.

By offering this incentive to Afghan troops, the insurgent group it hopes to reduce the high casualty rates it has been suffering in its offensive against the Afghan government.

Recently, Taliban propaganda online showed Afghan National Army infantry and militia soldiers greeted with hugs by Taliban leaders while surrendering their weapons and ensuring that they will not fight the Taliban in the future.

However, the Taliban do not appear to contemplate the option of safe surrender for the Afghan Special Forces. This is because the insurgents especially fear these elite corps which, despite constituting only 7 percent of the Afghan military force, carry out between 70 and 80 percent of the fighting for the government. Of all the Special Forces, the anti-terrorist unit Ktah Khas featured in the video is the one with the highest level of training and specialization.

Since the end of May, The Taliban, taking advantage of the withdrawal of foreign troops, which will end in the coming weeks, have seized important parts of the country’s territory and they already surround several provincial capitals.

Due to the lack of air support provided by US troops, the Afghan army has no way of offering significant resistance to the insurgents and currently only controls the big cities and the main roads.

View of an Afghan security forces patrol after clearing an area attacked by the Taliban on July 8, 2021 in Laghman. EFE / Ghulamullah Habibi

This Tuesday, the Taliban urged city dwellers to surrender to avoid further damage and also warned Turkey against keeping its troops in the country.

“Now that from the mountains and deserts, the fighting has reached the gates of the cities, the mujahideen do not want to fight inside the city,” he said. Amir Khan Muttaqi, in a message posted on Twitter by a Taliban spokesperson.

“It is better that our compatriots use the means at their disposal to get in touch” with us and “Reach a sensible agreement to prevent cities from being harmed”said Muttaqi, former Minister of Information and Culture of the Taliban regime.

The Taliban “They guarantee all the inhabitants that Afghanistan will be their homeland and that no one will take revenge”Zabihullah Mujahid, a spokesman for the insurgents, said in a voicemail message.

Members of the Afghan Special Forces tend to an Afghan National Army soldier wounded during a shootout with the Taliban, who attempted to attack a district center on Sunday, in Kandahar province, Afghanistan, on July 12, 2021. (REUTERS / Danish Siddiqui)

Insurgents claimed last week that they have in their possession 85% of the Afghan territory, a figure contested by the authorities of the country and impossible to verify independently.

What’s more, The Taliban on Tuesday warned Turkey against keeping its troops in Afghanistan once US-led forces leave the countrys and they considered that his decision was “reprehensible”.

“The decision of the Turkish authorities is wrong, a violation of our sovereignty and territorial integrity and goes against our national interests, ”the Taliban said in a statement, days after Turkey promised to provide troops to protect Kabul airport when foreign forces leave the site in August. .

“We consider the maintenance of foreign troops in our homeland, regardless of the country or the pretext, an occupation and the invaders will be treated as such”they added.

The Taliban promised that if Turkey “does not reconsider its decision” the insurgent group “will resist as it has resisted 20 years of foreign occupation”.