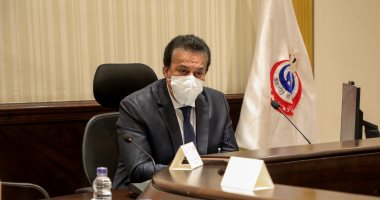 The Ministry of Health: We are studying the launch of an initiative for early detection of autism

Dr. Khaled Abdel Ghaffar, Minister of Higher Education and Scientific Research and Acting Minister of Health and Population, announced that the Ministry of Health has started a study to launch an initiative for early detection of autism in children from the age of two years.

This came during Dr. Khaled Abdel Ghaffar’s speech at the virtual conference held by the World Health Organization’s main office in Geneva today, Thursday, on training in the skills of caregivers for families of children with developmental delays or disabilities.

The Acting Minister of Health and Population confirmed President Abdel Fattah El-Sisi’s interest in people of determination, as he participated several times in the “We Can Make a Difference” celebration, which is held in December every year on the occasion of the International Day of Persons with Disabilities, to confirm the state’s commitment to caring for different groups and people with needs.

Dr. Khaled Abdel Ghaffar indicated that the percentage of children who suffer from difficulties in understanding and communication is about 2.7% of children in the age group 5 years and over, stressing that Egypt has pioneering experiences in early detection programs and care for children with developmental delays and disabilities, including the programs that it adopts. The centers affiliated with the General Secretariat of Mental Health for the treatment of autism and developmental mental retardation in children, in addition to many programs implemented by the General Administration of Disability Reduction of the Basic Care Sector.

He referred to the initiative of the President of the Republic for the early detection of hearing impairment and loss in newborns, which is one of the Egyptian state’s efforts to reduce developmental problems resulting from hearing disabilities.

Dr. Khaled Abdel Ghaffar said that the biggest obstacle in this program is the weak number of people qualified to deal with autism in children of all degrees, which prompted the thought to train other categories of non-specialists to use them in providing medical and psychological care for affected children, along with Training families of injured children to provide care for them in a way that compensates for the poor coverage of the hours required for training and care.