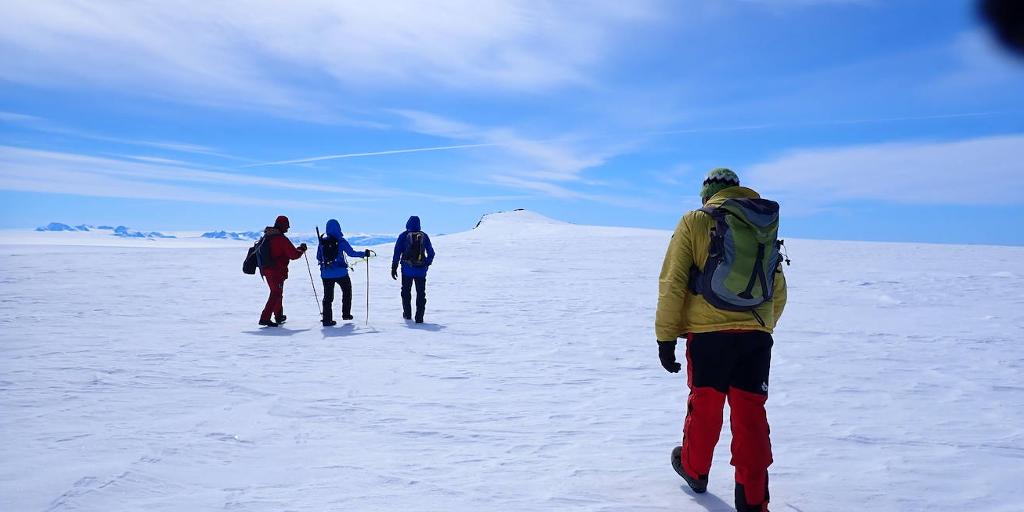 One of the most obvious symptoms that climate change is a reality is the melting of the polar ice caps. Something that has been revealed again after some Spanish explorers discovered a mountain in Greenland that, until now, had not been recorded on any map.

The members of the ‘SOS Artic 2022’ expedition left in April to verify, through microorganisms, the consequences of climate change and its effects. To carry out this research, its promoters designed a sustainable expedition in which they would take advantage of the ‘Wind Sled’ developed and built by the explorer Ramón Larramendi, who devised this transport system after having studied the Inuit.

In addition to other scientific conclusions, on their return to Spain, the explorers have announced that they have discovered a mountain, hitherto unknown, never seen, inside the Greenland ice.

More specifically, it is a mountain of rock known as ‘nunatak’ in the Inuit language. It is a rock about 30 meters high, surrounded by a layer of ice and is 2,205 meters above the level of evil.

The explorers assure that this mountain does not appear on any available map of the interior of the arctic island. It has been located 25 kilometers from the land limit of the area, in the middle of the immense interior plain. Something that, again, comes to demonstrate the effects of climate change.

Connoisseur of Greenland, Ramón Larramendi assures that for all the explorers it was a surprise to run into this ‘nunatak’. “We were expecting a plain and there was this rocky peak. Climate change is advancing by leaps and bounds in the Arctic », he assures.

However, the explorer assures that this discovery makes them feel “particularly satisfied” despite the fact that “this means that the Arctic ice is melting much faster than I could have imagined a few years ago and the consequences are serious for the entire world.” planet because it means that the level of the oceans rises.

After two years in which, due to the pandemic, his invention of the Wind Sled has been paralyzed, this explorer also assures that it has once again been shown to be a great alternative, efficient, sustainable and economical, to move around inside the polar territories.

This expedition began to navigate on the frozen surface of Greenland on May 17 and ended on the ice on Saturday June 11, traveling a total of 1,016 kilometers. The members were, of the five weeks of expedition, 16 days in movement in this system, which reaches a speed of 40 kilometers per hour in some sections, with days in which they traveled up to 200 kilometers.

For this expedition, the Wind Sled was made up of four modules (locomotive, two cargo modules and one for habitation), totaling 14 meters long by 3.5 meters long. Moving only with the wind that blows in Greenland, this transport system is capable of moving about 2,000 kilos, between people and material.

Although it is specially designed to move in arctic areas, the expedition recognizes that, due to the storms with gusts of wind of more than 100 kilometers per hour that they experienced, the sled was about to be buried. In fact, these inclement weather delayed the departure of the expedition. Once under way, the expeditionaries have advanced during a large part of the days taking turns piloting at night to better take advantage of the wind, which has not always been in favor.

During the expedition, samples were collected from the interior of the ice for the Astrobiology Center of the National Institute of Aeronautical Technology (INTA-CSIC), where a space research instrument, SOLID, is being developed to detect life on other planets in the Solar System , like Mars or the icy moons of Jupiter and Saturn. To this end, perforations have been made in the ice several meters deep to extract samples with particles that will be brought frozen to the CAB laboratories.

Likewise, air samples have been collected for the project of the MicroAirPolar group of the Autonomous University of Madrid, whose objective is to develop a map of the microbial populations at the poles, to find out how they are distributed, what resilience they have to climate change and how that it can affect the rest of the communities with which they interact. For this, an active air sample collector has been designed along the route.

These investigations are led by Lucía Hortal. Also participating in the expedition were Begoña Hernández (environmentalist), Carlos Pitarch (mountaineer and responsible for the project’s graphic and audiovisual material), Marcus Tobía (mountaineer) and Juan Manuel Sotillos (mountaineer and journalist).