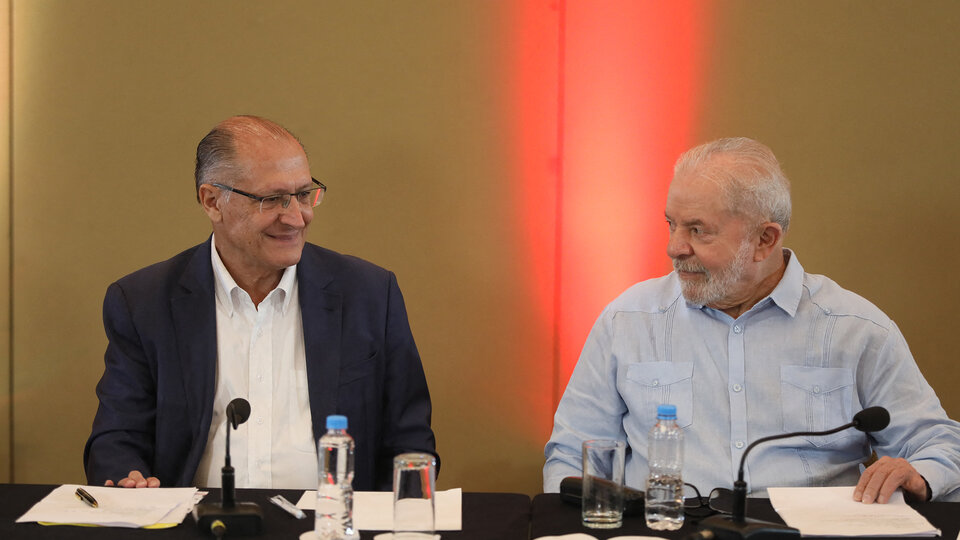 The Lula-Alckmin formula is official | It was formally presented this Friday.

The Brazilian Socialist Party (PSB) formalized this Friday the candidacy of the former governor of São Paulo Geraldo Alckmin as former president’s running mate Luiz Inácio Lula da Silva for the elections of October 2, for which he starts as a favorite.

“Here the serious moment we are experiencing has become very clear, in reality it is not a time for terrorism, it is a time for generosity, political greatness, detachment and unity (…) we are going to join efforts for the reconstruction of the countryAlckmin said at a press conference, according to the Sputnik news agency.

Until recently, Alckmin belonged to the Brazilian Social Democracy Party (PSDB), the main party of the Brazilian moderate right, with which he faced Lula in the 2006 presidential elections.

Now They agreed to go to the elections together, arguing that the seriousness of the Government of Jair Bolsonaro, who aspires to re-election, requires a union of forces..

The ex-president Lula called Alckmin a “comrade” and affirmed that he will be very well received within the PT, despite the fact that the party was very critical of his years in office in São Paulo.

In addition, Lula stated that the PSB will be very important in the process that is beginning now, both in view of the electoral campaign and in a possible future left-wing government.

“The important thing is to know that if this candidacy is formalized it is not only to win the elections, perhaps winning the elections will be easier than the task ahead of us to recover this country, we will talk with all of Brazilian society,” said Lula, who He has not yet made his candidacy official.

In a letter addressed to Lula da Silva himself, the PSB stated that “it wishes to contribute to the programmatic task inherent to the formation of a broad front in a productive and effective way“, indicated the newspaper O Globo.

“This proposal is not limited only to the electoral aspect”, since “it entails a programmatic dimension since the composition of a broad front requires the creation of a program that meets the expectations of the forces that make it up”, the PSB pointed out in the text.

The PSB stressed that “what is at stake in the 2022 elections is the Decisive encounter between democracy and authoritarianism“. A scenario, he pointed out, that was established with the government of former president Michel Temer -emerged after the impeachment of Dilma Rousseff- and “that was aggravated” with that of the current president Bolsonaro.

All of this “still supposes a particular and acute challenge“since there are “ongoing initiatives to impose limits on the democratic regime and the rule of law in Brazil”, alerted the Brazilian socialists, reported the Europa Press agency.

On December 15, Alckmin announced his departure from the PSDB after three decades and after having been one of its founders, which was seen as a strategy by the left to create a front as broad as possible – including figures from the center or the more moderate right – to achieve the return of Lula da Silva to the Planalto Palace.

The formation of the list to run for the presidency must be approved at a meeting of the PT board, where, despite the resistance of a minority wing, more to the left, the decision was already made and negotiated even before Alckmin join the PSB.

The PSB governs three states in Brazil (Paraíba, Maranhao, Espirito Santo and Pernambuco) and the alliance with the PT would allow Lula’s party to govern São Paulo for the first time with the former mayor and former Minister of Education Fernando Haddad.

The joint candidacy of Lula and Alckmin will be publicly formalized next April 30 in a massive event in São Paulo, possibly in the central Paulista avenue, thus marking the beginning of the pre-campaign for the October presidential elections.