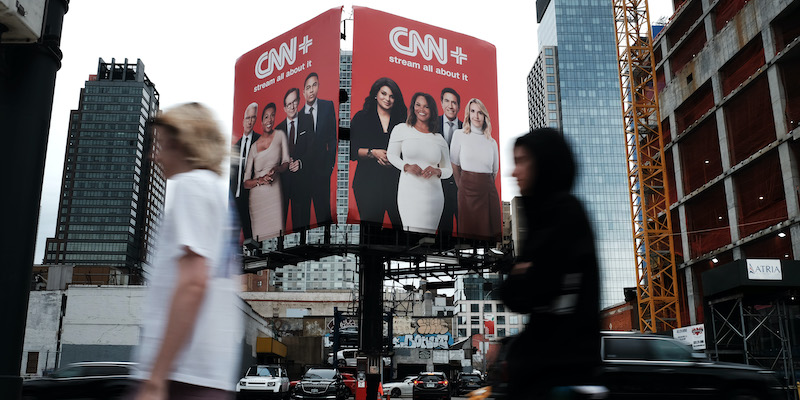 On March 28, on the 101st floor of the Manhattan skyscraper that houses CNN, the main US cable news network, the presentation party of CNN +, a subscription-based streaming platform dedicated to news coverage, was held. Not even a month has passed that the new company that owns it – born in early April, after a merger – has announced that CNN + will close permanently on April 30, and that it will reimburse all people who have subscribed to its first and only. month of activity. CNN + employees have been encouraged to apply for other positions within the company, but a good half (around 350 people) are expected to lose their jobs. $ 300 million had been invested in the project.

CNN + had been called CNN’s most important feat since Ted Turner launched the network in June 1980. To understand how it went bankrupt so quickly, you need to look back at what happened in the last year at WarnerMedia, the company CNN used to run. part, and understand a few things about the crowded and uncertain American information and entertainment market.

When it was born forty years ago, CNN was the first television station to offer an entire network of channels dedicated solely to news and is still among the most followed in the United States today. It can be seen for a fee as part of the pay TV package offer. CNN + should have been CNN’s attempt to enter the subscription streaming market (what Netflix, Prime Video, Disney + do, so to speak) and to recover the many viewers who had physiologically abandoned TV in recent years. This project was strongly backed by former CNN president Jeff Zucker and was publicly revealed in July 2021.

It would not have been a service for those who wanted to see the real CNN, which would have remained unchanged: it had to be something else, which did not take viewers away from the TV, but which would bring in new revenues, with insights into the news and some famous names. For this they had been hired, among others, the well-known conductor of Fox News Chris Wallace, acclaimed CNN reporter Kasie Hunt and actress Eva Longoria, who was supposed to do a travel program from Mexico.

As someone pointed out back then, why CNN wanted CNN + was clear, but why viewers should want it was another matter. CNN + would in fact have been a platform only for news and insights, but without the possibility of offering live programs (the most interesting for an audience that follows the news), or its most famous programs on demand, given that this would have violated the exclusive contract with pay TV suppliers. The cost of the CNN + subscription was set at $ 6 per month or $ 60 per year.

Added to the general weakness of the initial project was the fact that between the summer of 2021, when the project was announced, and the news of its closure a few days ago, a little of all colors happened.

Jason Kilar, who had been CEO of WarnerMedia since May 2020 and a major backer of the CNN + project, stepped down a few days before the merger after making it known early on that he disagreed.

Prior to the merger, WarnerMedia was controlled by the telephone company AT&T, which in June 2021 had agreed to invest a billion dollars for the first four years of the CNN + project, despite having already spoken out in favor of the merger with Discovery and already having de facto decided that in that way she would exit the entertainment and information market.

The other big promoter of CNN + was Jeff Zucker – who among other things had been a close friend of Zaslav for years – who, however, had unexpectedly resigned as president of the CNN on February 2. The stated reason was the secret relationship with a manager of the company, but the hypothesis of many is that in reality he was involved (together with her) in a system of “roofs” devised by the presenter and friend Chris Cuomo. Cuomo was the flagship conductor of CNN and he had been suspended and then fired by Zucker in December, for exploiting his position at CNN to help his brother Andrew, the former governor of the state of New York, prepare his defense against some allegations of sexual harassment. After Zucker, executive Allison Gollust also resigned, which led to the conclusion that she was the colleague with whom Zucker was having an affair.

In short, close to the merger of 8 April, without Zucker, Kilar and with AT&T ready to step aside, of the people who had believed in the CNN + project from the beginning, only Andrew Morse, the digital manager of CNN, remained.

In the weeks prior to the merger, Morse repeatedly asked those who were working on the CNN + project to preview Discovery executives to get them involved in the project, but this had never happened (prior to a merger, companies are not required to to share their internal affairs). Meanwhile, in mid-March, two weeks before CNN + went live and three weeks before the merger, Discovery CFO Gunnar Wiedenfels made a public speech saying that a giant streaming platform would be born from the merger. featuring all content from Discovery + and HBO Max, HBO’s streaming platform that was operated by WarnerMedia. However, he had not mentioned CNN +, implying that it was not among the flagship projects of the new company.

Discovery’s management had been skeptical of CNN + from the start, mostly because it was a single-issue platform and the company had already made several attempts to do so, all of which went wrong. Zaslav’s goal after the merger was exactly the opposite of CNN’s: that is, to create the most varied offer of streaming services all together, and more; he wanted to bring CNN back to a more fact-based kind of news and journalism.

In fact, for some years now CNN has no longer been considered the network of “detached” journalism, as it had been for a long time, but one of those that became more lively partisan especially during the Trump administration, against Trump. Zucker had favored a strong personalization and emotionality of the hosts and journalists, deeming this address more appropriate to the times and tastes of the public. This approach had initially proved successful, but in recent months CNN had been penalized even more than other news organizations by the decline in interest in politics following the election of Joe Biden.

Despite this, however, until the beginning of February the CNN + project had not been questioned because it strongly supported Zucker, who was a friend of Zaslav. When Zucker was gone, instead of postponing the release of the platform until after the merger, as it seemed logical to do with such a large project and without the person who had carried it out from the start, Kilar – who was still in charge of WarnerMedia, but he knew he would be leaving shortly – he had insisted on confirming the launch date for CNN +. According to some, Kilar considered CNN + to be his legacy as the head of WarnerMedia.

Discovery and WarnerMedia therefore arrived at the time of the merger with two completely different intentions; and with the resignations of Zucker and Kilar, Discovery’s intentions had prevailed.

The first report on the performance of CNN + had arrived in Zaslav on April 11, two weeks after the opening of subscriptions to the platform and just three days after the merger: the data showed that the number of viewers of the streaming platform did not exceed 10 thousand. per day and the platform’s downloads were decreasing despite the massive marketing campaign that had been concocted for the launch. The next day there were some articles that reported these numbers talking about a failure of the platform: inside CNN it was suspected that the data had been released by the Discovery group, to lobby CNN + in their favor.

The CNN + project managers had told executives in the new company just born from the merger that they had reached 150,000 subscribers: a number they believed in line with the target set for the first year (2 million). However, this result was deemed insufficient and the marketing investments planned for the first weeks of CNN + had been suspended. For example, when it went online, Disney + made a million subscribers on the first day alone.

Three days later Zaslav had reunited with his direct subordinates, who had pointed out that the results of the first few weeks of CNN + did not justify the enormous costs. It was therefore proposed to close the platform. Zaslav agreed.

The news was communicated to CNN executives and CNN + employees on Thursday, April 21, by Chris Licht, CNN’s new CEO (in place of Zucker), who was external to CNN until before the assignment and considered an ally of Zaslav. His assignment of him shouldn’t have started before May, but a few days ago he found himself having to manage the crisis. In the communication sent to employees, Licht wrote that “this decision is in line with WBD’s broader strategy. In such a complex streaming market, consumers want simplicity and an all-in-one service that offers a better experience and more value than many standalone offers ». On the same day Andrew Morse made it known that he will leave the company.