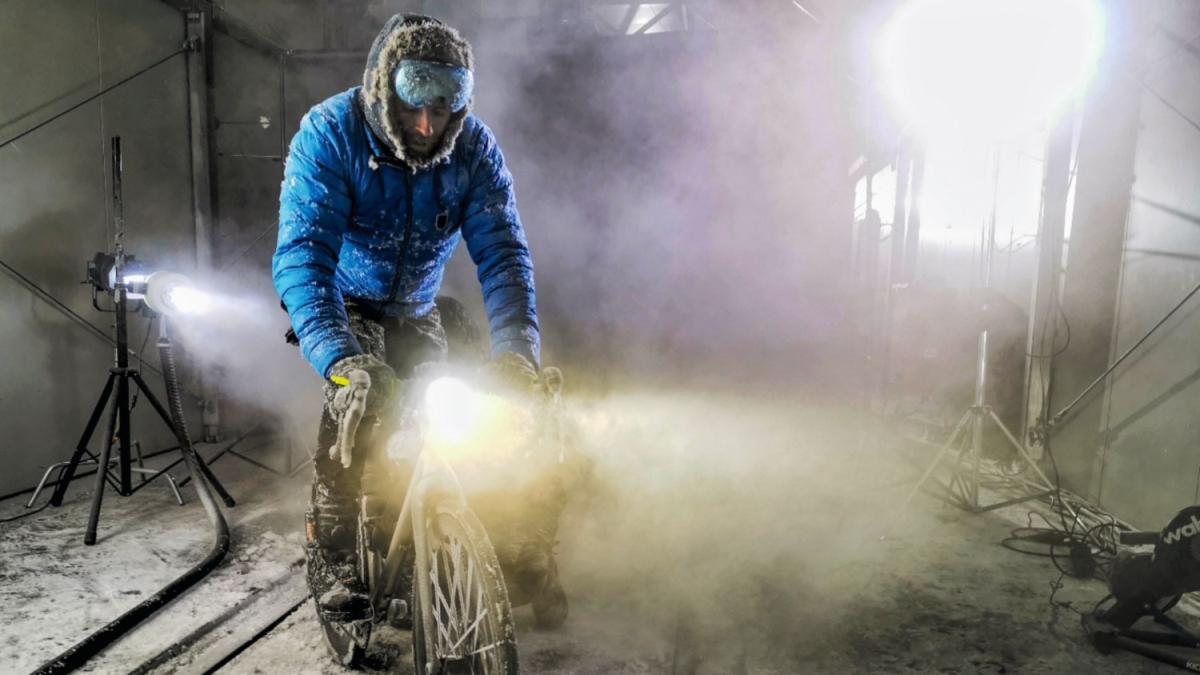 'The limit is me' (exclusive prologue to the book)

Twenty-eight degrees below zero. I sit on the gravel bike and try to move the pedals at a steady pace. This is called round pedaling. But that’s not exactly what it’s about here. Ice has long settled in all corners of the mechanism, which creaks with every turn. The breath still freezes on my lips and hangs in strange crystals from my beard. My big ski goggles are completely fogged up. Sweat accumulates on the lining of the thick functional jacket I wear and is a bit of a refresher for my skin. But I know that sweating in those temperatures is a threat to my life. I’ve been fighting this dilemma for hours: don’t stop pedalling, but don’t sweat either.

I’m constantly walking a tightrope: I can’t push myself too hard, go too far, or fall short.. All of this is proving very demanding. But today I have nothing to lose, not yet. When I get off my bike later and push through the heavy steel gate, I’ll be faced with a summer day. More than fifty degrees difference a few meters away. I am in the Deutsche Bahn climate chamber in Minden, and it is mid-July. In the seventy-five meter long container, prototypes of the new trains are regularly tested in arctic conditions. Today I am being another prototype.

In a few weeks I will undertake my biggest challenge, the largest triathlon ever helda swimming, cycling and running event that will take me around the world.

“In a few weeks I will undertake my biggest challenge, the biggest triathlon ever done.”

I will cover one hundred and twenty triathlon distances, which is equivalent to a total of twenty-seven kilometers, twenty-one thousand of them on a bicycle. Of them there are not few that I will do in Siberia and in high mountains, where in the winter months it can be up to forty degrees below zero. And since I don’t want to freeze to death on an icy road in the arctic tundra, I’m going to prepare well and spend this day with filmmaker Markus Weinberg in what is currently the coldest place in Germany. It must be the worst place to train for any cyclist. My bike, which I have affectionately named Wife, has been mercilessly put to the test since early morning. In return, we have obtained very valuable conclusions: the commercial lubricant that has been used for years is completely useless here; the chain jumps and the shifter gets stuck, and to remove a flat tire from its rim I almost have to break the carbon wheel…

So I’m going to have to upgrade Wife a lot to avoid running into big problems when roaming Siberia. And all this, just my bike. How will my mind and body react in such conditions? At the moment I can’t even imagine it, all of that deserves the greatest respect. Of course, I feel well prepared. I just finished the dress rehearsal: a thirty three day triathlon around the whole of Germany. I swam forty kilometers in Lake Constance, carrying a red-orange raft and everything I needed: a change of clothes, a sleeping bag, and food.

After those four days, the sun caused a painful burn on my neck and I had innumerable scratches on my body.. I traded my wetsuit for the road bike and rode north up the Rhine towards Friesland. Then to the border with Poland and I spent endless days in constant rain, desperately searching for food in villages closed by the pandemic and leaving the tortuous climbs up the Erzgebirge behind.

On the 18th, after almost three thousand kilometers on the bike, I was finally able to put on my running shoes. With them I crossed Bavaria in the direction of Königssee and finally returned to Lindau via Füssen. Along the way I had ups and downs, and I learned a lot about myself and what I proposed to myself, especially that this triathlon around the world was going to be more complicated and unpredictable than anything I had done so far.

I have completed sixteen triathlon distances, but in welcoming Germany, with its perfect infrastructure… Will I be able to do one hundred and twenty, which will take me to cross three continents? I wipe the ice off my beard with my winter gloves. Thinking about the conditions that await me there leaves me shocked. This promises to be a great challenge that will require me to bring out the best in me. I know I still have a lot of work to do before I’m really ready. This is without a doubt the greatest adventure I have embarked on in my life. At the moment I only have one goal: kick and kick, not be cold and not sweat. Everything else will soon be seen. When I start in September I will discover what I am really capable of. One way or another.