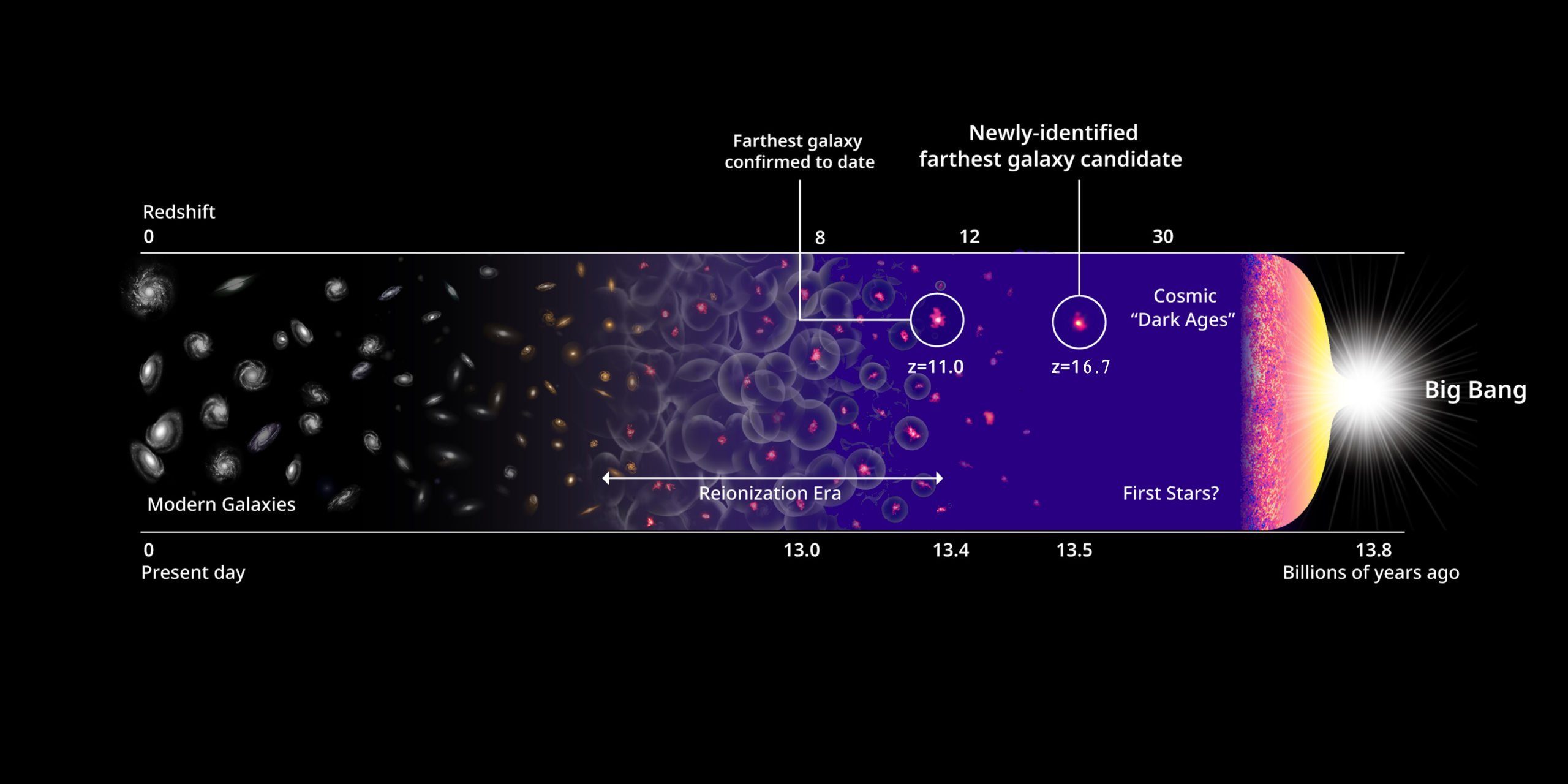 Il James Webb Space Telescope (JWST) breaks another record. Or so it seems to judge from the data collected by astronomers. As part of the program CEERS (Cosmic Evolution Early Release Science Survey), the NASA “telescope of wonders” has unearthed in the constellation of Boote a celestial object never observed before, which astronomers have called it CEERS-93316.
If subsequent observations confirm the discovery, in fact, CEERS-99316 will be awarded the title of most distant celestial object known to us. A discovery that once again confirms the prodigious performance of the James Webb space telescope.

What do we know about this galaxy

JWST observed this galaxy in the near infrared, thanks to its instrument NIRCam: i colors that we see in the image created by the researchers of the University of Edinburgh were therefore added in post production. Infrared is the ideal electromagnetic band for observing very distant galaxies: the light of the latter, in fact, crossing the enormous cosmic distances loses energy, thus passing from the visible band to the infrared one. In addition, James Webb’s huge mirror (6.5 meters in diameter, the largest ever launched into space) makes it ideal for collecting the light of even the faintest objects.
The light of CEERS-93316, like that of any other celestial object, carries a lot information that astronomers know how to read and interpret. For example the distance: A recent study shows that CEERS-93316 is so far away that its light has barely gone out 235 million years after the Big Bang. And since the universe is just under 13.8 billion years old, it means that the light captured by Webb has traveled for over 13.55 billion years: 98.3% of the age of the universe!
The fact that theobject is not point-like clearly indicates that it cannot be compactlike a quasar: it just looks a galaxy. The analysis also indicates that CEERS-93316 began producing stars between 120 and 220 million years after the Big Bang. It means it could be one of the very first galaxies born in the universe!

The record year for the James Webb Space Telescope

This new distance record is already the third in 2022. In April the discovery of HD1a galaxy whose light has departed 330 million years after the Big Bang. The author of the discovery (made by combining data from different ground and space telescopes) is an Italian astrophysicist, Fabio Pacucciche lavora all’Harvard Center for Astrophysics in Massachusetts.

The record, however, did not last long: at the end of July (just a few days after the announcement of his first scientific images) James Webb observed another candidate galaxy, GLASS-z13whose light has departed 300 million years after the Big Bang.

Record, this, which lasted even less: just two weeks later the discovery of CEERS-93316. Not even astronomers expected James Webb to be able to pull off so many records just a few weeks into his scientific campaign. At this rate it is reasonable to assume that we won’t have to wait long for the next distance record.

Because it is an important discovery

The exercise of observe galaxies increasingly remote, however, it is far from being an end in itself. Indeed, locate objects as far away as it is right theremain objective of the telescope James Webb.
The birth of the first galaxies and the first stars, in fact, is one of the great ones mysteries of astrophysics Contemporary. We know very little about when and how these structures formed, and what astrophysical dynamics and mechanisms were at play at the time. For now there are only guesses and assumptions ranging from the very cautious to the wildly speculative, but we do not have any solid certainty about this crucial period for our cosmos.
It’s like we have a “Hole” in the biography of a person: we cannot explain how that child turned into that adult. In the metaphor, this person is the universe itself. JWST will serve to shed light (literally!) On this mystery, thus helping us to to fully reconstruct the history of cosmic evolution. It will be an incredibly complex job, but it’s worth it because it’s potentially capable of revolutionize our whole conception of the cosmos we live in. And judging from these first extraordinary results, it seems that Webb fully lives up to even the rosiest expectations.