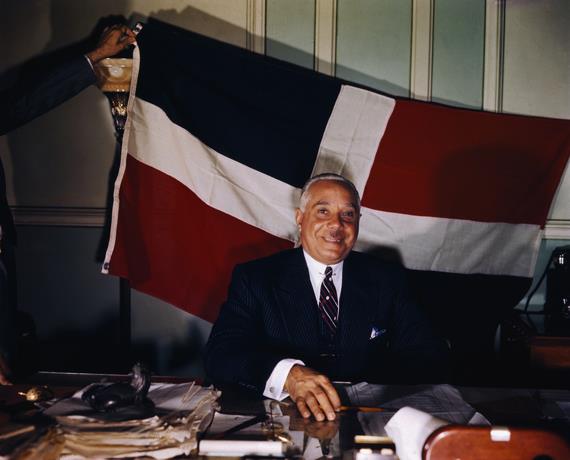 It was his last day and, as many point out, it was his custom, at 5:00 am the “Generalissimo” was already standing, Rafael Leónidas Trujillo, to walk, without knowing it, towards the edge of a path that is not seen, but to which every human being arrives: death.

It was May 30, 1961 and at 5:30 p.m. on that Tuesday, the cloak of the historical event began to be woven that would cover the lifeless body of Trujillo and with which it was intended to shelter a Dominican Republic that for three decades suffered the coldness of a of the most fearsome dictatorships in Latin America.

Between 9:00 in the morning and 5:15 in the afternoon, the “Benefactor of the Homeland”, as he called himself, carried out his last agenda as ruler, which included visits to the San Isidro Air Base, lunch at the National Palacehis regular siesta and various meetings with officials.

According to the testimonies collected by Juan Daniel Balcácer in his book “Trujillo: The Tyrannicide of 1961”it was regular for the dictator to go out on Wednesdays or Thursdays to his farm in San Cristóbal, so one of these two days was what the “conspirators” were waiting for to carry out the execution.

However, during the development of the activities of that Tuesday, Trujillo informed his close collaborator Virgilio Álvarez Pina that at night it would move to the Hacienda Fundación, a move that the action group did not foresee and that forced them to speed up the plans.

“Due to this fortuitous circumstance, at least three of the original members of the action group were unable to participate in the tyrannicide,” Balcácer underlines.

The historian also points out in his work that the group on the avenue was made up of “nine people who would be distributed in three vehicles”.

As soon as he could, Miguel Ángel Báez Díaz communicated by telephone with Antonio de la Maza who at 5:30 p.m. he set out to gather the “conspirators” and start the timer that would mark the final hour of Trujillo.

The next two and a half hours pass with the proceedings of the executioners to certify the veracity of the trip and obtain the weapons with which they would carry out the tyrannicide.

Regarding weapons, an article published in 2011 by the newspaper Hoy specifies that the group on the avenue was equipped with at least a 45-caliber pistol, a 12-gauge sawed-off Browning shotgun, and three M-1 carbines.

Likewise, the aforementioned media affirms that in some “unpublished” statements given to the Attorney General of the Republic, at that time, by Salvador Estrella Sadhalá, Roberto Pastoriza and Huáscar Tejedaa regulation 45 caliber pistol, a Smith and Wesson 38 caliber revolver and a Luger pistol are mentioned.

path of no return

Already at 8:00 at night, while the dictator was preparing to leave for his usual walk from Estancia Radhamés, but not before asking his driver Zacarías de la Cruz to be ready to leave for Fundación upon his return, the conspirators also they were getting ready but to meet him and divert their journey towards the path of no return.

on your way out Rafael Leónidas Trujillo visited his mother, Julia Molina, who lived on Máximo Gómez Avenue with Mexico, where APEC University is currently located, and from there he traveled to George Washington Avenue walking from west to east to the Obelisk, accompanied by several collaborators.

While, at 8:10 pm de la Maza picks up Pedro Livio Cedeño from the house of Juan Tomás Díaz whom he went to visit to ask Chana de Díaz for her husband’s pistol.

Later, Cedeño and de la Maza continue their journey in search of the other members of the mission and Huáscar Tejeda waits for Roberto Pastoriza at his residence and then goes to George Washington Avenue to meet with Salvador Estrella Sadhalá, Antonio Imbert and Amado García Guerrero.

At 8:25 at night the conspirators were already on the highway with weapons spread and distributed in three vehicles.

De la Maza, Imbert, Estrella Sadhalá and García Guerrero shared a Chevrolet car that was parked in front of the Fair’s Coney Island and three kilometers later they were Tejeda and Cedeño in an Oldsmobile car, while Pastoriza waited in a Mercury.

And although Trujillo had indicated that after his walk he would leave for the hacienda, on the contrary, after 9:15, He decided to visit the base again, “aviación”, and also his daughter Angelita.

After the long walk ended, Miguel Ángel Díaz, who accompanied the “Boss” on his tour, met with his cousin Juan Tomás Díaz, and the latter, in the company of his brother Modesto Díaz and Luis Amiama Tío, went to the house of his daughter to establish the “operations center” and wait for the outcome.

Given the sudden actions of the “Generalissimo” that delayed the event and accelerated the impatience of those who had been waiting for an hour, Báez Díaz appeared to calm the anxiety of his teammates and assure them that there was little left.

Missing 10 minutes to 10:00 at night, “El Chivo” boarded his Chevrolet Bel Air and when passing by the Agua y Luz theater, the car was seen by the first four of the action group who were faking a trivial conversation on the boardwalk.

The car passed in front of them and immediately de la Maza, Imbert, Estrella Sadhalá and García Guerrero began the persecution in which it did not take him long to reach Trujillo’s vehicle.

With Antonio de la Maza’s shot, at approximately 10:00 PM, the confrontation had begun and the accurate projectile hit the body of the so-called “Benefactor of the Fatherland”.

Zacarías, the dictator’s driver responded to the conspirators and for about 10 minutes a section of the George Washington became the scene of a historic event forged under a hail of bullets accompanied by the noise that announced the departure of each projectile.