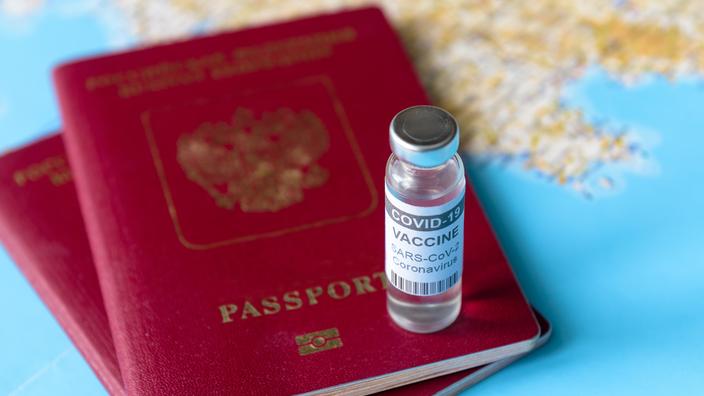 the Kafkaesque situation of the French vaccinated at Sputnik V

Not recognized in Europe, the Russian vaccine does not allow expatriates passing through France to access the health pass. Some are piling up vaccination schedules on both sides of the border.

«We are completely hostage to a vaccine geopolitics. It’s a nightmare for all of us“. Last spring, Catherine*, an expatriate in Moscow, had no choice but to receive the Sputnik vaccine. No Pfizer or Moderna serum in Putin’s country, and the French embassy evoked diplomatic difficulties with the Russian authorities to deliver the doses. The Quai d’Orsay therefore encouraged the French community to turn to local vaccines. In March and April, the 50-year-old received her two doses. The following summer, great is his disappointment when he arrives in France: his vaccination schedule is not recognized. The expatriate is forced to quarantine ten days, and deprived of a health pass.

However, when she goes to the neighboring vaccination center to receive an approved serum, she is refused outright. “The ARS does not have sufficient data to allow the accumulation of different vaccines“, we explain. Six months later, nothing has changed: for the Christmas holidays, Catherine and her children respected a ten-day isolation, and were satisfied with public places not subject to the famous QR code.

Same disappointment for Claire, vaccinated with Sputnik but who wanted to take advantage of the summer holidays to receive a first Pfizer dose, then a second at three-week intervals. Doctor’s refusal. “AT At the time, the WHO still advised against combining vaccination schedules“, she explains to the Figaro. «Many French people have hidden that they were vaccinated with Sputnik, so as not to be bothered. I could have done the same, but the most important thing for me was the medical aspect».

Caught in a vaccine imbroglio, the French in Russia no longer know which saint to turn to. And the cold war around vaccines seems to be setting in to last. In the country of Vladimir Putin, the recognition of Pfizer, Moderna, and AstraZeneca does not seem to be on the agenda. “We have our vaccines, we have four, doesn’t that offer the possibility of choosing? “, estimated in July the spokesman of the Russian presidency. On the European side, the study of the validity of Sputnik by the European Medicines Agency is dragging on. The latest statement expressed a lack of sufficient data to prove the effectiveness of the Russian serum, and declined to comment on the details of the ongoing assessment. It was in July 2021.

For Sputnik V, as well as the also unrecognized Chinese serums Sinovac, Sinopharm and CanSino, the Ministry of Health guidelines were updated in September: “People who have received one or two doses of a vaccine not recognized by the EMA (…) will have to receive two doses of mRNA vaccine in France, in order to complete their vaccination schedule and thus obtain a health pass in France“. As a result, many French people, straddling two countries, accumulate doses. This is how Catherine was able, at the beginning of January, to receive her first injection of Moderna. She will return at Easter for the second, and in the meantime will receive the Russian encore, the famous “Spoutnik light», to extend the QR code in his country of residence.

“To accumulate six doses scares me. I do it because I have no choice, but for my children it is out of the question”.

Pending more precise data, Sylvie, a French civil servant who has long been resident in Moscow, preferred to wait before the injection. It almost cost him dearly. His mother fell suddenly ill in early December. Landed in disaster, the French hospital demanded a valid health pass from her. Every morning for ten days, the mother went through the swab, her baby under her arm. “I could have cheated, used someone’s password. But the situation was serious enough not to complicate it“, she says, bitterly.

«A simpler solution would have been to do a serological test when arriving in France: we would have known that we had antibodies, that’s all!“, sighs Catherine, who herself displays a natural immunity rate well above the average. The 50-year-old deplores the lack of medical data on the accumulation of two vaccination schedules. ” “When I tell the story to the doctors, they completely hallucinate. We are being placed in a potentially risky medical situation. I do it because I have no choice, but I’m scared to inject six doses into my bloodstream without knowing the potential effects“, she confides. “As for my 10 and 5 year olds, that’s just out of the question. You can play with my health, not theirs».

SEE ALSO – Booster dose and Covid-19 infection: Véran takes stock of the French who risk the deactivation of their health pass

As if to accumulate defects, since June 23, Russia has been classified in the “red” category by France in the epidemic map, meaning a “active virus circulation» and the «presence of variants of concern“. Any direct flight from Russia is subject to ten days of isolation on French soil. “No public source tells us why. There are no criteria, as if the decision was completely arbitrary!“, denounces Catherine. To get around the rule of isolation, many expatriates stop over in Amsterdam, Brussels, Frankfurt, Milan or Barcelona. On the various French cats in Russia, the conversations are ubiquitous. “If I do my first dose in Croatia, do you know if I can do the second in France and activate the vaccination pass?asks one. Responnse : “On the TousAntiCovid application, you can scan the QR code of the vaccine made in Croatia and see immediately if it is validated. I did it for 1time received in Germany and the 2e in Spain. No problem».

“The French in Russia do not have the luxury of being for or against vaccination, they have simply been abandoned. »

Franck Ferrari, adviser to the French in Moscow

The feeling of injustice is shared by many. “The Ministry of Foreign Affairs claims that the Russians did not give permission to import our vaccines, but the argument is a little easy“, protests in turn Franck Ferrari, adviser to the French in Moscow, who has pleaded with the embassy since the start of the crisis for access to European vaccines. “VSHow is it that the Finns, the Swiss, the Germans managed to import doses, and not us?“. In the spring, a handful of the Johnson & Johnson doses could only be delivered, but reserved for embassy staff and their families. Some French people then turned to representations in Germany or Switzerland to take advantage of remaining doses of AstraZeneca and Moderna.

On January 11, the spokesperson for Muscovite expatriates made a point of expressing the dismay of his fellow citizens in a letter addressed to Minister Jean-Baptiste Lemoyne, in charge of French people living abroad. “The French in Russia do not have the luxury of being for or against vaccination, they have simply been abandoned“, points out the author in the missive that Le Figaro was able to consult. “Would we have become a sub-nation?“, he asks. Contacted by Le Figaro, the Quai d’Orsay did not respond to our requests.

*Name has been changed.