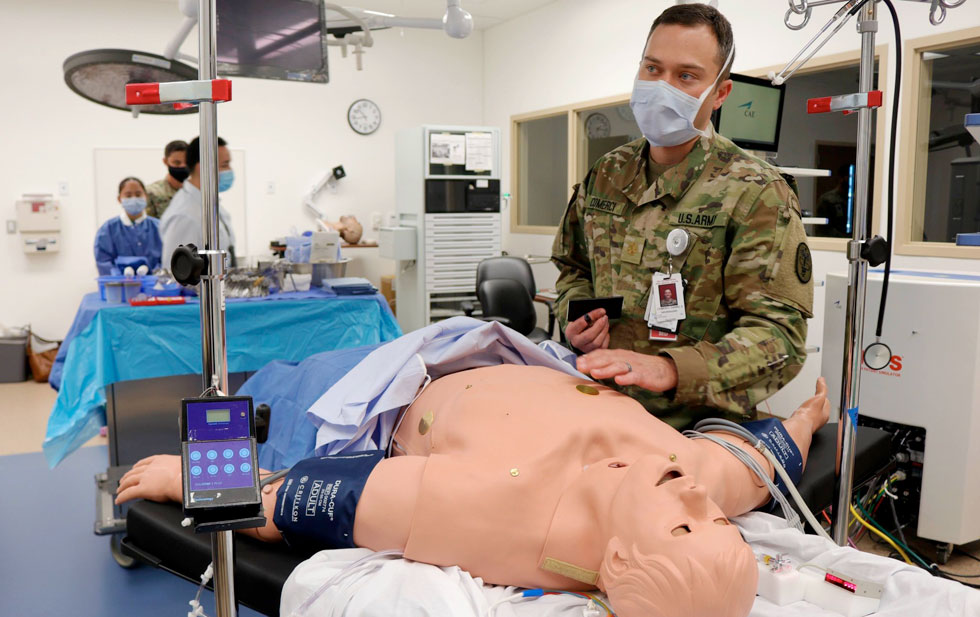 The staff of the William Beaumont Army Medical Center (WBAMC) are delighted, as they have entered the final stretch of the transition from the old hospital to the new building, classified as the largest in the entire US Army, the most modern in Step.

Not in vain the surgeon general of the United States Army called the new Beaumont hospital as the jewel in the crown of the military institution.

For the next two weeks, WBAMC is on the home stretch, moving all the outpatient clinics that are currently operating at the legacy hospital to the new facility, marking the end of the move-in process.

The new 1.3 million square foot complex – houses a 7-story hospital, with 5 support buildings, including an inpatient clinic, an outpatient clinic, an administration building, a clinical research building and a plant of Central Utilities – is scheduled to go into full operation in early August.

On June 16, WBAMC staff conducted a series of detailed drills – known as “A Day in the Life” – designed to validate all processes and procedures of each department and service throughout the hospital. This was to ensure that they are fully capable of doing whatever it takes to continue providing the highest quality patient care in the new facility.

From June 16 to June 27, WBAMC moved several of its departmental offices from the old facility to the new one.

On June 28, WBAMC officials held a press conference to give a first look at the new facility. The media and news crews were invited to take a tour that included stops in physical and occupational therapy, the simulation operating room, maternal and child services, the hybrid CATH laboratory, and the emergency department.

On July 1, WBAMC celebrated two milestones: the Dedication Ceremony for the new facility, along with the hospital’s Centennial Celebration in Fort Bliss, Texas. It was on July 1, 1921 that William Beaumont General Hospital, named after William Beaumont, the father of gastric physiology, opened its doors.

Prior to the ceremonial ribbon-cutting, members of the presidium – which included Colonel Michael Oshiki, WBAMC commander, Major General Bernabé, Fort Bliss commanding general, and leaders of the Defense Health Agency (DHA), US Medical Command Army and the Army Corps of Engineers (USACE) – made some comments on the historic occasion.

Lt. Gen. Ronald Place, DHA Director, said that “the money, the mortar, the doctors that work here are all representative of a promise that this makes to our soldiers, our sailors, our airmen, our marines, our guardians. and our partners, and all their families ”.

That promise, said Place, is that “they deserve the best care that this country can provide, in the best facilities we can build, with modern equipment and updated technology, and the care provided by the most trained, committed and prepared medical professionals than our military can offer ”.

Lieutenant General R. Scott Dingle, Surgeon General of the United States Army and Commanding General of the Army Medical Command, considered the new facility, the new jewel in the crown of the Military Health System and the epicenter of the preparation of the soldiers .

“The Army medical area and the United States Army trust that what we have is not only the jewel in the crown, but the epicenter of the preparation of the soldiers, so that when we are called to deploy today and fight tonight, we will return them [soldados] on duty tomorrow, due to the training done here at this jewel in the crown. ”

Commanding General David Hill, Deputy Commanding General, USACE, explained that “patient care drove every aspect of the design of this state-of-the-art medical complex, setting a standard for the Department of Defense and the medical industry.”

“With this world-class facility, Army medical professionals will not only be able to meet the demands of today, but also support the changing needs of our fighters and their families in the future,” Hill said.

Once the transfer of the outpatient clinics is completed over the next two weeks, the new WBAMC facility will have fully taken over healthcare activities at Fort Bliss by early August. According to Oshiki, this is an important milestone, not only for the military base, but also for the city of El Paso.

“The opening of what is the newest and most technologically advanced medical center in the Department of Defense is the culmination of years of work and is important not only for William Beaumont and Fort Bliss, but for our greater El Paso community,” said Oshiki . “The border region is officially recognized as a medically underserved area, and the addition of this facility provides critical capacity northeast of El Paso … this will be even more true as we work toward achieving Level Trauma Center designation. II and Designated Secretary of State “.

With this appointment, the WBAMC will be able to enhance its capabilities when it comes to treating both civilians and service members.

“This will allow us to not only expand our capacity to treat civilian emergencies and help the El Paso community treat those patients, we at William Beaumont will also increase our own readiness to deploy to the world in support of military operations,” he said Oshiki.