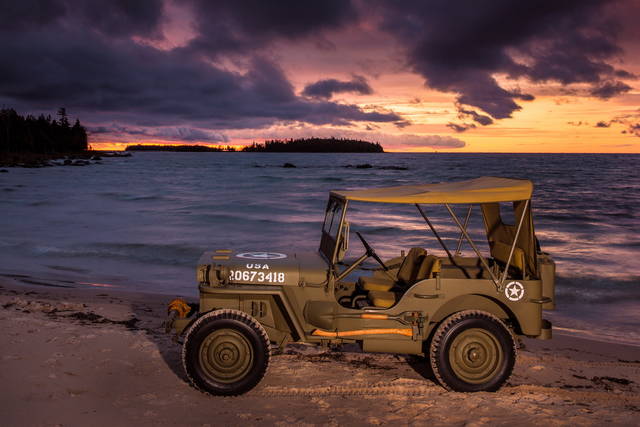 BORN FOR WAR, GROWS IN ADVENTURE – Jeep it is a brand that belongs to the small elite of the global ones. Known throughout the world, it was born in the midst of the bloodiest conflict in history: the Second World War. It is in fact July 15th 1941 when Willys-Overland Co. signs a contract with the United States War Department to produce its first military vehicle. The Jeep trademark was registered in 1943 and derives from the nickname that the soldiers gave to the compact quantum robust all-wheel drive vehicle. After the war, many Jeeps invaded the countries as a military surplus and the ride of the brand, a symbol of adventure in any weather and road conditions, began. 80 years later we can hear from Christian Meunier, CEO of the brand, the paths that Jeep will travel in the coming years: “We are expanding our portfolio, for example with the Jeep Grand Cherokee L with 3 rows of seats, and we are laying the foundations for the our presence in the premium SUV segment with the new Wagoneer and Grand Wagoneer. The next step in this product range will be the new one Jeep Grand Cherokee (who read more), which for the first time will have 4xe plug-in hybrid technology. Jeep pursues with conviction the vision of an electrified future ”.

ANIMA GREEN – Meunier stated that the commitment is to do of Jeep the more “green” brand and exciting in the world of SUVs, a great proclamation. The electrification of the Jeep range will allow you to travel by pure electric in the city and have all the off-road capabilities of the brand, enhanced by the electric, in almost absolute silence. Jeep wanted to summarize its history in 12 key steps, putting 4xe technology first. The mixed drive, with the electric motor at the rear, for example, does not affect the capabilities summarized in the wording Trail Rated: the battery and electronics are in fact hermetically sealed and waterproof. Another stage of a future history is that marked by Wagoneer e Grand Wagoneer (who read more), which promise Jeep tradition, luxury and quality in eight-passenger cars. Less recent, and probably attributable at least in part to Sergio Marchione, is the global expansion also due to the compact Jeep Renegade and the new Gladiator, the Jeep pick-up. The new facilities have allowed customers in Brazil, India and China to get behind the wheel of a Jeep.

UBIQUA TRACTION AND NEW MODELS – It was 1999 when Quadra-Trac II traction was introduced, capable of distributing torque not only between the rear and front axles but also on both sides. The combination of Quadra-Trac with Vari-Lock limited slip differentials gave birth to the Quadra-Drive system. Another Jeep milestone was the introduction of the first Jeep Grand Cherokee ZJ at the Detroit International Auto Show in 1992. Chrysler President Bob Lutz, a true car guy, drives the first Grand Cherokee ZJ, from Jefferson’s production line to the Cobo Hall window, which was broken down to represent the character of the new model. Rewinding the tape we go even further back in time, to that 1986 in which the Jeep Wrangler. While aesthetically similar to the CJ-7, it is very different ‘inside’ to offer more comfort, handling and a lowered center of gravity. August 5, 1987 is the date on which American Motors Corporation is sold to Chrysler Corporation, with the Jeep brand entering Chrysler’s Jeep / Eagle division.

COMPACT OR PREMIUM? PROVIDED IT’S JEEP – It is 1979, the world experiences an energy crisis and it is in that contingency that the idea of ​​a compact 4×4 was born. There Jeep Cherokee XJ sees the light in 1984 and its load-bearing body allows much more compact dimensions than its predecessor even with a passenger compartment that retains 90% of the interior space. On the other hand, the 1963 Jeep Wagoneer was completely different, considered by the house to be the first premium SUV that combines four-wheel drive with automatic transmission. Equipped like a high-end automobile, the Wagoneer changes the public’s perception of all-wheel drive vehicles. Going back in time of 10 years we arrive at that 1953 in which the first Jeep meeting takes place. Held in Georgetown, California with 55 vehicles and 155 participants, it is considered the Granddaddy of all 4×4 events. The event, organized by Mark Smith, demonstrates the conviviality and sense of belonging of Jeep vehicle owners.

THE FIRST SUV, THE FIRST MASS 4X4 – We arrive at the first post-war period, that 1946 in which Willys-Overland presents the first station wagon with an all-steel body – the Willys Wagon. Three years later the Wagon evolved and became a 4×4, a feature that made Jeep define it as “the first SUV”. 7 seats, great towing capacity and outstanding off-road skills make it a successful model, which remained in the breach for almost 20 years, a true record. The war has just ended and in 1945 the CJ-2A is the first 4×4 to be offered as a mass product for civilian use to be offered to the public as. This Jeep uses the same architecture as the military MB but several improvements, such as the folding tailgate, side-mounted spare wheel and larger headlights. Thus we arrive at that 1941 in which Willys-Overland becomes the main supplier of the military vehicle for the US government. Produced in over 350,000 units until 1945, the small but tetragonal military off-road vehicle Jeep MB fights in all battlefields and represents the basis for the civilian Jeep CJ, the car from which it all began.