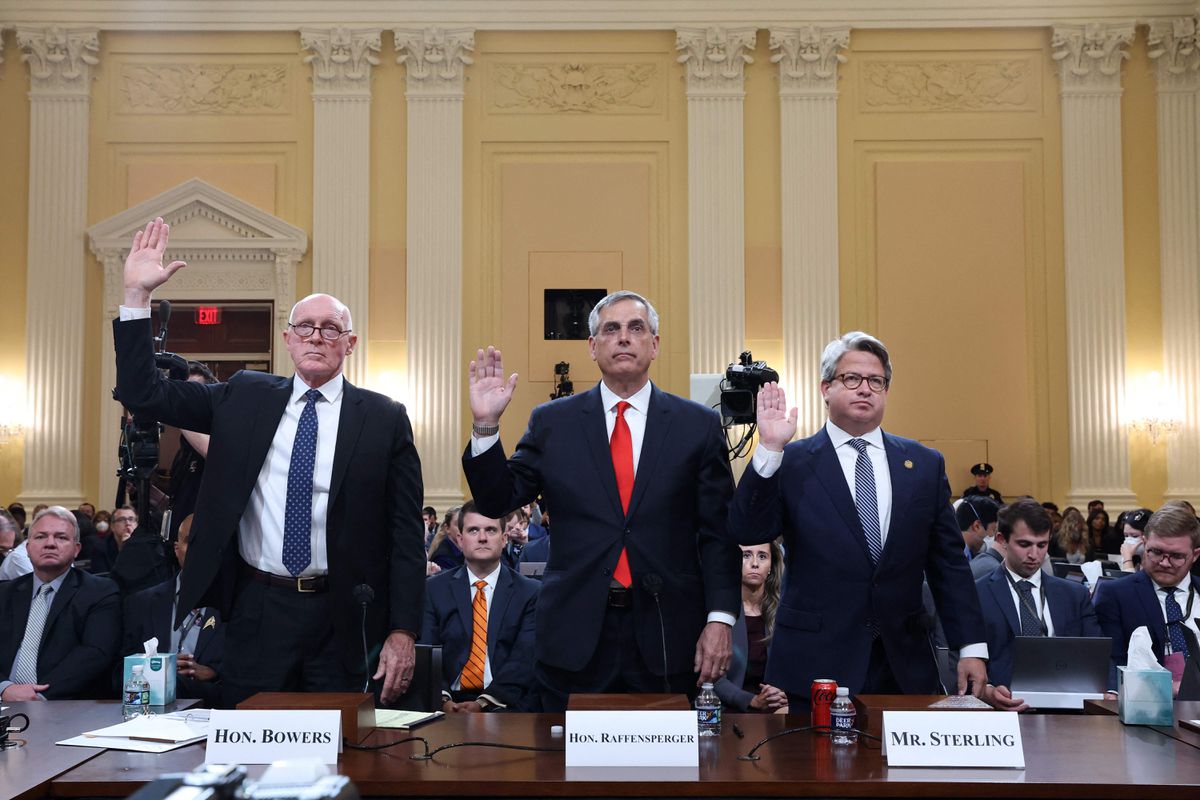 The phrase lives up to the great milestones in the history of American presidential infamy, from Richard Nixon (“I am not a thief”) to Bill Clinton (“I did not have sexual relations with that woman, Miss Lewinsky”). It was pronounced by Donald Trump on January 2, 2021 during a call to the Secretary of State of Georgia, Brad Raffensperger: “I just need to find”, began the still president, before hesitating for a second, “eh, 11,780 votes; that is, one more than we have [de diferencia]. Because we won in the State”. Four days later, Trump recalled again at a rally in Washington, before thousands of his supporters, that it was only a matter of finding a handful of ballots in Georgia. That same day, hundreds of those supporters stormed the Capitol and violently interrupted for the first time in the history of the United States the transfer of power to Joe Biden, who had won the November elections.

A year and a half has passed since then. And in the fourth session of conclusions of the investigation of the events of January 6, held this Tuesday in a solemn room of the United States Congress, the nine members of the commission revealed that Trump actively participated in a plan to provide false voters in States in which Biden defeated him. He resounded again the phrase of the “11,780 votes” and to the anthology of the attack on the Capitol there was no choice but to add another: “We have many theories, we simply do not have any evidence.”

Rudy Giulianni, a former New York mayor and Trump adviser, told Rusty Bowers, the speaker of the Arizona House of Representatives, as he testified under oath. “Aren’t we all Republicans?” Giulianni added. The phrase demonstrates for the nine members of the commission (seven Democrats and two Republicans) that Trump and his team personally pressured, despite the lack of evidence, local officials in charge of certifying electoral votes in states such as Arizona, Michigan, Wisconsin, Pennsylvania and Georgia, places where they tried to use those public servants to deny the Democratic victory so that the 45th president could stay in power. The committee also stressed that these pressures led to threats from Trump supporters to those officials, which became death threats, according to several witnesses called to testify at the session, and that the still president did nothing about it.

“They didn’t care in the least. He did not condemn them, nor lift a finger to stop them; he went ahead with his false accusations anyway,” said commission vice chairwoman Liz Cheney, R-Wyoming. Cheney asked those present to take into account the revelations of the previous hearings (“Remember what you knew when you made those calls,” he added), during which they presented evidence that Trump “relentlessly” tried to force Mike Pence to knock down a legitimate electoral result, despite the fact that it was “illegal and unconstitutional” since he knew that it was not in his power to do so. In addition, they offered evidence that his closest advisers and members of his family repeated over and over again to the tycoon that his suspicions of electoral fraud were baseless.

“First he filed lawsuits to get them to agree with him in court,” said Adam Schiff, a Democrat from California, and the member of the commission who took center stage in this fourth session: he has been the one who has carried the weight of the questioning to the witnesses. “When he saw that he didn’t get it [de las 62 querellas que se interpusieron, solo le dieron la razón en una, y el nuevo recuento no afectó al resultado], began lobbying individual state legislators. He and his allies brazenly violated multiple federal laws by participating in this plot, including conspiracy to defraud the people of the United States,” Schiff added. And it was inevitable to interpret his words as a message sent directly to the Department of Justice, to which the commission is serving evidence every week on a tray so that they can take legal action against Trump that it is not clear that they will ever arrive.

The hearing also singled out a member of the Senate, Ron Johnson (Wisconsin). He offered false voters to Vice President Mike Pence, according to evidence provided by the commission, which showed an exchange of text messages between a member of Johnson’s team and another of Pence’s team minutes before the start of the January 6 session that the attack interrupted. In another recording, the president of the Republican National Committee, Ronna McDaniel, could be heard saying that Trump spoke in a conference call about the possibility of falsifying, if necessary, voters in charge of certifying victory or defeat.

The conversation with Raffensperger, who revealed in his day The Washington Post, It has been, obviously, one of the strong points of the audience. Including the famous phrase. The Georgia secretary of state has told the commission that “there was no ballot to look for.”

“The numbers are the numbers, and the numbers don’t lie”, he repeated several times during his testimony, in which those present could not help but laugh when a part of that recording was played in which Raffensperger, who sounding embarrassed by the tone the conversation was taking, he offered to send a link (link) to the then president to verify that the calculations were correct in Georgia. To which Trump, who insisted that he had won the state by 400,000 votes, so it couldn’t be that hard to find 11,780, replied: “I’m not interested in your link. I have a link better!”.

Schiff asked the witness why he decided to continue with his work in the midst of those pressures and threats that he and his family received in those days. Raffensperger shrugged it off, saying: “I think sometimes you need to stand up and hold your own, do your job. That was all we did. Stay on the side of the law and the Constitution.”

The serious threats suffered by the officials who dared to contradict the Republican leader have occupied another of the main plots of the last chapter of the series prepared by the commission, whose president, the Democrat from Mississippi Bennie Thompson, presents each day as a story of suspense

Bowers said that in that time he received “20,000 emails and tens of thousands of messages in voicemail and text messages”, that videos were broadcast accusing him of being “a pedophile and a pervert” and that a man , dressed in the uniform of the radical militia The Three Percenters, supporters of Trump, appeared near his house, armed, and threatened a neighbor. Another of those cited, Gabriel Sterling, a senior official in the Georgia Secretary of State who offered a press conference in those days in which he denied the fraud in Georgia, declared that he was convinced that the time had come to speak publicly after seeing on Twitter a death threat that showed an animation that included a rope (all the paraphernalia of the hanged man became a recurring iconography in the events leading up to January 6).

Although the session’s harshest statements were made by former Fulton County, Georgia, election clerks, Wandrea Exhaust Moss and his mother, Ruby Freeman. They worked on the November 2020 appointment, and Trump named them 18 times on the Raffensperger call. Moss detailed the harassment suffered by her grandmother, which included a home invasion by guys looking for Moss and her mother to make a “citizen’s arrest.” Freeman – whose testimony was on video (in front of that of her daughter, who appeared in court, visibly affected) – said: “I lost my name, I lost my reputation, I stopped feeling safe.” The FBI advised him to stop living in her house for a while. And so she did.