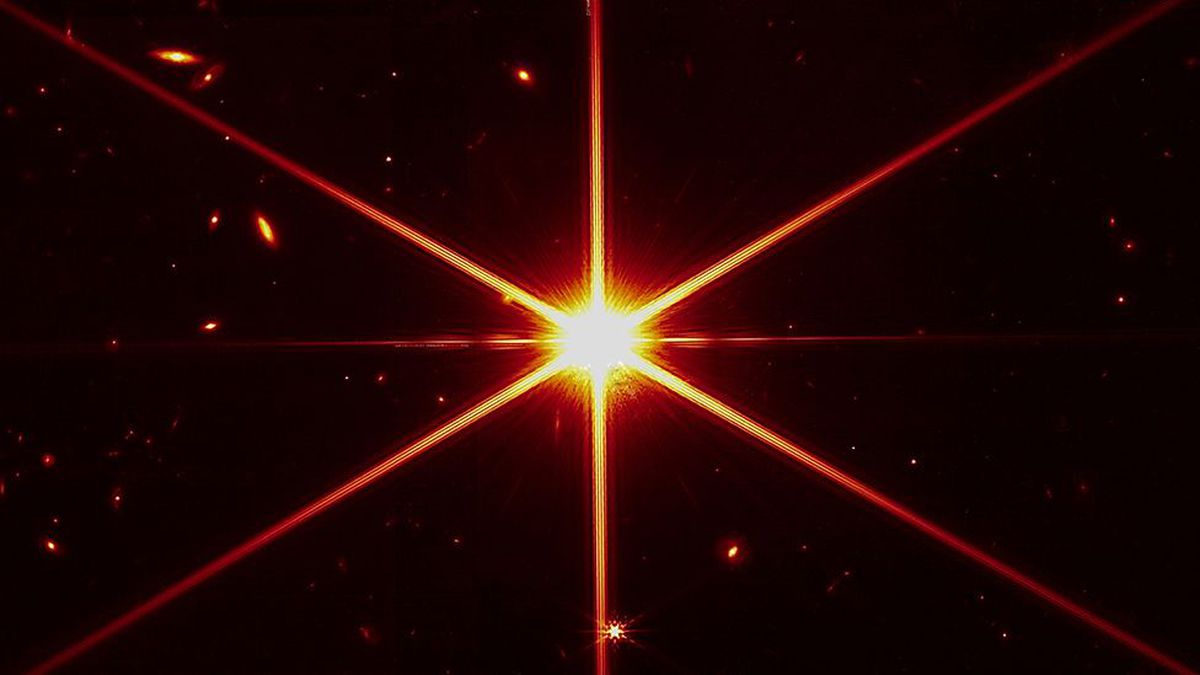 Of the protagonist of this image, the star that is in its center, we know little more than its distance, its brightness or the speed at which it moves (measured by the space telescope Gaia). In the constellation Draco, it’s right here, just 2,000 light-years away in our galaxy, and until a few days ago, few humans had looked at it. Her being chosen by the James Webb Space Telescope team for the alignment of the telescope has made her famous. The star of the highest resolution infrared image ever taken from space, it proves that the telescope Webb it is operational and working as well as the most optimistic models expected. You just have to look a little and look at the detail of the galaxies that are detected around it to realize it.

We could observe this star tomorrow before sunrise from an observatory in the Northern Hemisphere: the Roque de los Muchachos observatory in La Palma, for example. For this we could also use a segmented telescope. In fact, some of the largest telescopes on Earth use segmented mirrors. GRANTECAN is one of them and Webb he is the first to do so in space. Webb has a primary telescope, the large 6.5-meter light-collecting telescope made up of 18 hexagonal segments. GRANTECAN measures 10.4 meters and has 36 segments. For these segmented telescopes to function as a single light-collecting structure, each of its parts must be moved and adjusted very precisely. It is not easy to do it in ground-based telescopes, last week the first attempt was shown at 1.5 million kilometers from Earth. And it went well.

It is important to remember that in order to put Webb in its orbit it had to be put in a rocket, subjected to tremendous vibrations and then deployed in space. Now you have to adjust it for everything to work. First you have to position each of the segments and the secondary mirror, the small one that collects the light from the primary to send it to the detectors, in such a way that optical aberrations are eliminated. Once this is done, each of the segments is tilted so that the light from all of them is concentrated at one point. This is called image stacking. Then, the piston of each of the rings is adjusted so that they act as if they were a single mirror. Throughout this process it is important to know the shape of the telescope at all times and that is what “the selfie” of the primary mirror. Knowing the shape of the telescope (defined by the position of each one of the segments) and knowing how the light is reaching the detector, it is possible, by Fourier analysis, to correct the alignment errors.

This is what has just been done with NIRCam, which is known as the observatory’s wavefront sensor. In other words, the detector capable of measuring how light is reaching the detector. It is used in these first steps because it has a wide field of view and, in addition, it can operate at higher temperatures than the other instruments. No time can be wasted while the telescope cools down to the temperature at which it has to operate to be most efficient.

And what comes next? Well, for the next six weeks they have to align the rest of the scientific instruments. To understand it better, we can take the example of a terrestrial telescope. When we astrophysicists arrive at the telescope, the instrument we need is already in place and ready thanks to the teams working at the observatories. There are instruments that are physically removed from the telescope to place a different one and instruments that simply need to readjust part of the optics so that the light reaches them and provide us with the data.

In the case of Webb, all the cameras see the sky at the same time, although not the same area of ​​the sky, and, obviously, you cannot physically move the cameras on and off. The next step in getting the telescope ready for science observations is to adjust the telescope so that changing an objective from one camera to another will result in sharp, focused images in all instruments (NIRCam, NIRSpec, NIRISS, and MIRI). . For this, the relative positions of all the fields of vision must be known precisely. That is exactly what they are doing with Webb Right now, measure these positions. In this process, Webb’s mid-infrared instrument, MIRI, will be last in line to be lined up, as it still has to wait for the cryogenic cooler to reach its final operating temperature, just below seven degrees. above absolute zero.

But back to the star, the protagonist. Its name, TYC 4212-1079-1, tells us that it has an entry in the Tycho catalogue, therefore it was observed with the Hipparcos satellite of the European Space Agency, which means that it is one of the 2.5 million stars brightest in the sky. It has a second name, also easy to remember, 2MASS J17554042+6551277, which means that it was observed in the infrared sky mapping carried out by a series of small 1.3-meter telescopes at Mt. Hopkins and CTIO, Chile, known as 2MASS (Two Micron All Sky Survey). For what Webb could aim at it, you had to know its position precisely and its brightness. Let’s not forget the long road behind any milestone. The journey to the past, to the discovery of billions of stars in a galaxy, begins with just one.

Eva Villaver She is a researcher at the Center for Astrobiology, dependent on the Higher Council for Scientific Research and the National Institute of Aerospace Technology (CAB/CSIC-INTA).

cosmic void it is a section in which our knowledge about the universe is presented in a qualitative and quantitative way. It is intended to explain the importance of understanding the cosmos not only from a scientific point of view but also from a philosophical, social and economic point of view. The name “cosmic vacuum” refers to the fact that the universe is and is, for the most part, empty, with less than one atom per cubic meter, despite the fact that in our environment, paradoxically, there are quintillion atoms per meter cubic, which invites us to reflect on our existence and the presence of life in the universe. The section is made up Pablo G. Perez Gonzalezresearcher at the Center for Astrobiology; Patricia Sanchez Blazquez, full professor at the Complutense University of Madrid (UCM); and Eva Villaverresearcher at the Center for Astrobiology.