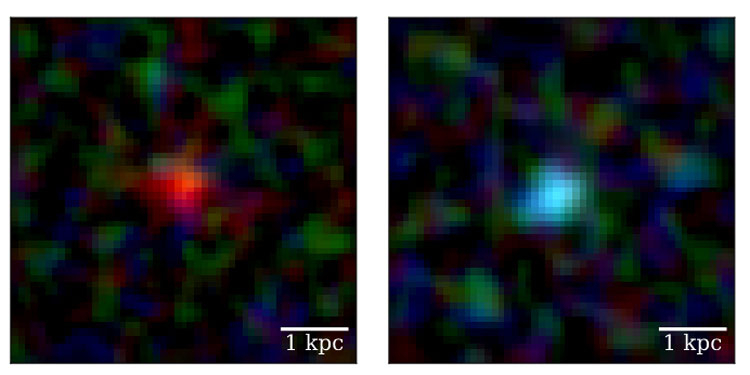 The James Webb Space Observatory has shown an impressive potential for unraveling the mysteries of the universe from its first steps. The first images made it possible to detect two candidates for the most distant galaxies at once, when our Universe was 300-400 million years old. Only a week has passed and astronomers have presented a candidate for an even more distant and older galaxy, which could have appeared earlier than 300 million years after the Big Bang.


On the left are three combined images from the Hubble, on the right is an image from the Webb in the ultraviolet range (the real color for this range). Image Source: S. Finkelstein et al. / The University of Texas at Austin

It should be said right away that while we are talking about candidates for the oldest galaxies. Astronomers have yet to conduct a spectroscopic analysis of the detected “red” objects, confirming that the redshift value determined for them really corresponds to the distance / time, and is not the cause of other factors and even interference.

The most distant galaxy candidates presented last week, GLASS-z11 and GLASS-z13, have redshifts of z11 and z13, respectively, which means their light has been traveling to us for about 13.5 billion years.

Like other elementary particles, photons also follow the wave nature. Thus, the movement of photons is not rectilinear, but along a wave, which lengthens the route of movement. And the farther from us is the object emitting photons, the more “extra” way they have to go. This is easy to use in calculations.

In addition, dust and gases in intergalactic space absorb shorter wavelengths of emitted light, and photons of the red and infrared parts of the spectrum can reach us from the depths of the Universe (the red signal of a traffic light is not in vain chosen as a danger signal – it is best seen through precipitation). From all this, scientists extract information in order to more or less accurately determine the age of observed objects – in this case, candidates for the most ancient galaxies.

A new candidate for the most distant galaxies, CEERSJ141946.35+525632.8 (Maisies Galaxy, “Maisie”), has a redshift of z14.3, which can be identified as 286 million years after the Big Bang. The discovery of this object was helped by a study by the James Webb NIRCam instrument in the infrared range on June 21, 2022 under the CEERS (Cosmic Evolution Early Release Science Survey) program. Images from the Hubble telescope were also used to refine the data.

According to the theory of evolution of the Universe presented by astrophysicists, which is largely confirmed by observations of the cosmos, galaxies began to form in the era of Reionization, which approximately corresponds to the crane shift z15 or about 550 million years in the field of the Big Bang. “James Webb” allows you to get a better look at objects in this era and even look deeper, using effects such as gravitational lensing. The first results of observations show that in those days galaxies could form more intensively and more often than theory says. This means that terrestrial science imagined many things differently and this needs to be corrected.