The terrestrial adventure of the James Webb space telescope which is preparing for the launch on December 18th. After the completion of the tests at the Northrop Grumman plant in the United States, the large and delicate telescope was shipped by ship to the French Guiana, where the European spaceport is located.

As previously indicated, the details of the voyage by ship had been kept secret to avoid the security issues related to naval piracy. The expedition was successful and then after a 17-day journey finally arrived at its destination ready for the next steps.

The James Webb Space Telescope is preparing for launch in December

It departed from California on September 26 and arrived in French Guiana (after crossing the Panana Canal) on October 12, after more 9300 km travel by ship aboard the great MN Colibri, finally arrived at its destination. From the port of Pariacabo now the JWST will have to be brought to Kourou in the factories ofTHIS for integration with the Ariane 5 rocket. 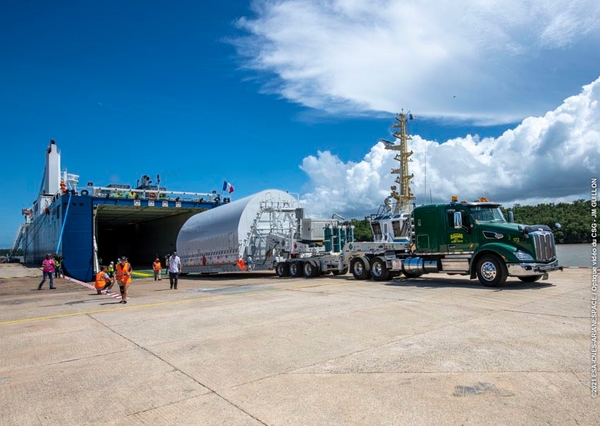 This part of the transportation of the James Webb space telescope took about 15 years of programming and to avoid any problems the Kourou River was dredged to remove possible obstacles while high tide was used to reach the dock.

The dimensions of the telescope are 10.5 x 4.5 meters with a weight of six tons. In order to be able to insert it into the 30-meter container it was folded in launch configuration. The whole shipment, with the additional items had a weight of 70 tons.

At the spaceport, the clean rooms have been adapted with new filters to purify the air and avoid contamination. When there are 29 days left until launch, the James Webb space telescope it will be positioned for integration with the second stage. When there is a week left, the payload will be positioned on the rocket and at -6 days the two will be positioned fairing (from 17 x 5.4 m). Finally, the day before the launch of the Ariane 5 rocket, the latter will be placed on the pad.

After launch, the challenge will not be over. As told by Thomas Zurbuchen (NASA associate administrator) there will be three weeks in which a series of basic steps will have to be performed. There will be 50 main steps and 344 individual steps that will carry the James Webb space telescope to operate 1.5 million km from Earth.