Until the Covid-19 “problem” is solved, there will always be new twists in the economic world.

Equities currently tell a different story than the real yield on 10-year Treasury Inflation Protected Security which is -0.92% relative to inflation. This means that the price of bonds must fall for a return.

While CPI levels are high, it indicates that inflation will be higher than expected throughout 2021.

But let’s go step by step.

The relationship between money and uncertainty, at this historical moment, is reminiscent of Keynesian monetary theory.

This considers uncertainty as the real protagonist that defines the role of money and, according to Keynes, the inability of classical theory is to ignore this factor and reserves two functions for money: a medium of exchange and a fund. worth. This second function, for Keynes, has no meaning in economics without uncertainty. The choice of an individual to accumulate “money” is the result of fear of the future and the more fear, the greater the desire to accumulate and the return that is the interest rate they expect from financial activities. The latter constitutes the “instability or equilibrium” of the price of money based on the preference of individuals to have liquidity, in fact the goal of an entrepreneur is to obtain a profit in economic terms, ie an excess.

The uncertainty in which we found ourselves is what we have in common, together with the enormous public spending, the increase in raw materials and inflation.

The European Central Bank, precisely in reference to inflation, has announced that it has revised the inflation target after more than 20 years from its birth, i.e. a 2% in the medium term (and will tolerate it to rise above it, in order to compensate for any falls with respect to the previously agreed target) and this leads us to think that the ECB will not raise interest rates or reduce monetary stimuli in order to enforce the “forward guidance”. In fact, the low market rates could lead Europe into a period of “deflation” and consequently to a drop in the general level of prices, resulting from a recessive situation. It would lead to a reduction in the cost of raw materials, labor, bank loans and aggregate demand for goods and services (the sum of the expenses incurred for the purchase of national goods over the course of a year – quantitative theory).

A first step will be to understand the ECB’s moves during the July 22 meeting to redefine forward guidance. The possible debate on the “PEPP”, with a small part that already considers it appropriate to reduce it, and on the QE (quantitative easing) put in place to stimulate economic growth, production, employment and inflation. A first decision could be to reduce the purchases of the first and increase those of the second, thus starting the “tapering”, that is to gradually decrease the current economic stimuli.

Let’s move on to the FED front.

Lo, recently observed, between the 10 and 2 year yields touched the lowest value since February. The yield gap between Treasuries has fallen by 50 basis points from the high of a few months ago, they could have an annual yield of 1.8%. As the 2-year yield rises and the 10-year yield falls, the yield curve flattens out. This is sometimes seen as a “negative” factor for the economy.

The 10y yield is important as it has been a stumbling block for tech stocks. By the time it went down, tech companies grew. Not only that, it also affects mortgage rates and business loans. Many expected the 10-year to stay at 2% or more by the end of the year. But the bond market has reached a tipping point since the last Fed meeting. 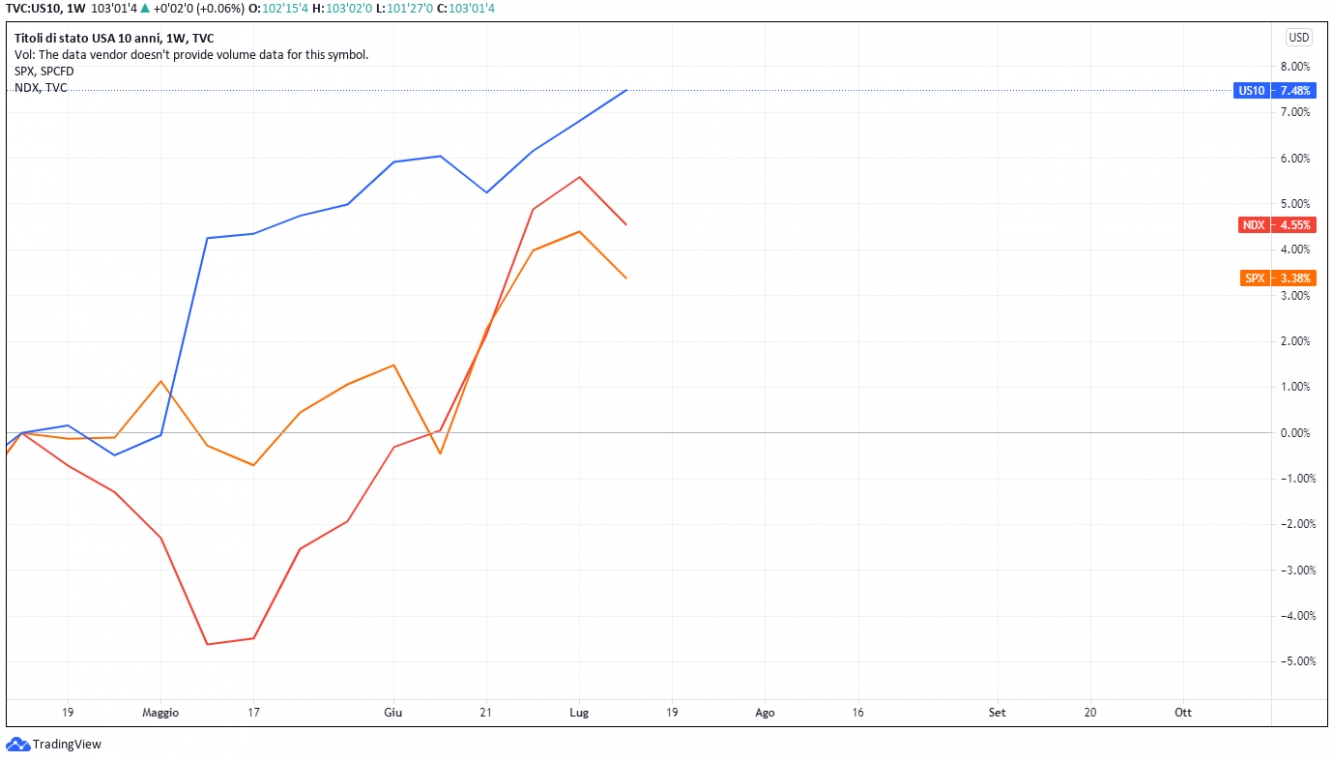 Indeed, inflation data from members of the Federal Open Market Committee Summary of Economic Projections (FOMC – SEP) showed that the Fed plans to raise interest rates twice by the end of 2023. These developments can be called “hawks” and they came when inflation shot up.

The so-called “flattening” of the yield curve also occurred after the last Federal Reserve policy update. This has made many investors agitated about a slowing economy (as reiterated earlier). The first to suffer could be the banking, industrial, materials and energy sectors.

Powell reassured and assured in June that monetary policy will continue to help the economy until there is a real recovery.

Although inflation has exceeded 5.4% compared to 5% last month, and will remain “high” for the next few months, it will not reduce the purchase of government bonds and mortgage-backed securities for a total of 120 billions of dollars a month. Ultimately he confirmed (for now) his policy a little more “dove”.

This does not mean that the aggregate price indices of real estate, cars and durable goods have recorded quite negative data.

Inflation is influenced by data on the CPI (the consumer price index) which increased by 0.9% in June, while in the last year it increased by 5.4%.
recording an increase of more than 4.9% in 2008. At times, major increases or decreases in price can “shatter” the general picture and that’s why we hear about the Core which has increased by 4.5% annually, recording the largest variation since November 1991. This was also caused by the increase in the prices of the reference index of cars (causing a sensation) which rose by 10.5%, energy prices (+ 54% for gasoline on an annual basis) and new vehicles rose to 2% which is affected by the shortage of semiconductors.

The Fed’s preferred inflation indicator, the PCE rose 4% in May (third consecutive big increase), nearly double the central bank’s target. The latter, of course, repeated that inflation is the consequent cause of the various “transitory” factors and that prices will normalize next year. But this growth should not be underestimated because the PCE had only grown 1.7% per year between 1995 and 2019.

Retail sales, on the other hand, surprised, rose by 0.6% against expectations of a decline of 0.4%. One factor, which could affect in the future, are real wages because the real average hourly wage for all employees has decreased by 0.5% while the real average weekly wage has decreased by 0.9% and finally the real average hourly wage. in one year it fell by 1.7%. But after all, one of Biden’s main goals is to reach full employment and increase the bargaining power of the work even as the number of hires is still below the expected one million with an unemployment rate that has risen to 5.9%.

Is it right to start talking about reducing asset purchases, changing accommodative policies, starting to implement tapering by the end of the year?

In the meantime, how will it react to the mixed signals from the ECB and the Fed?

The major currency pair hit its lowest levels since early April at 1.1770 points last week due to possible hawks to come. However, in the US session, there was an impressive rebound after Fed Chairman Powell’s speech. The break of the 1.1780 level would bring the price down to 1.1750 up to 1.1710, instead the inversion of the upward trend would bring it back to 1.1950. 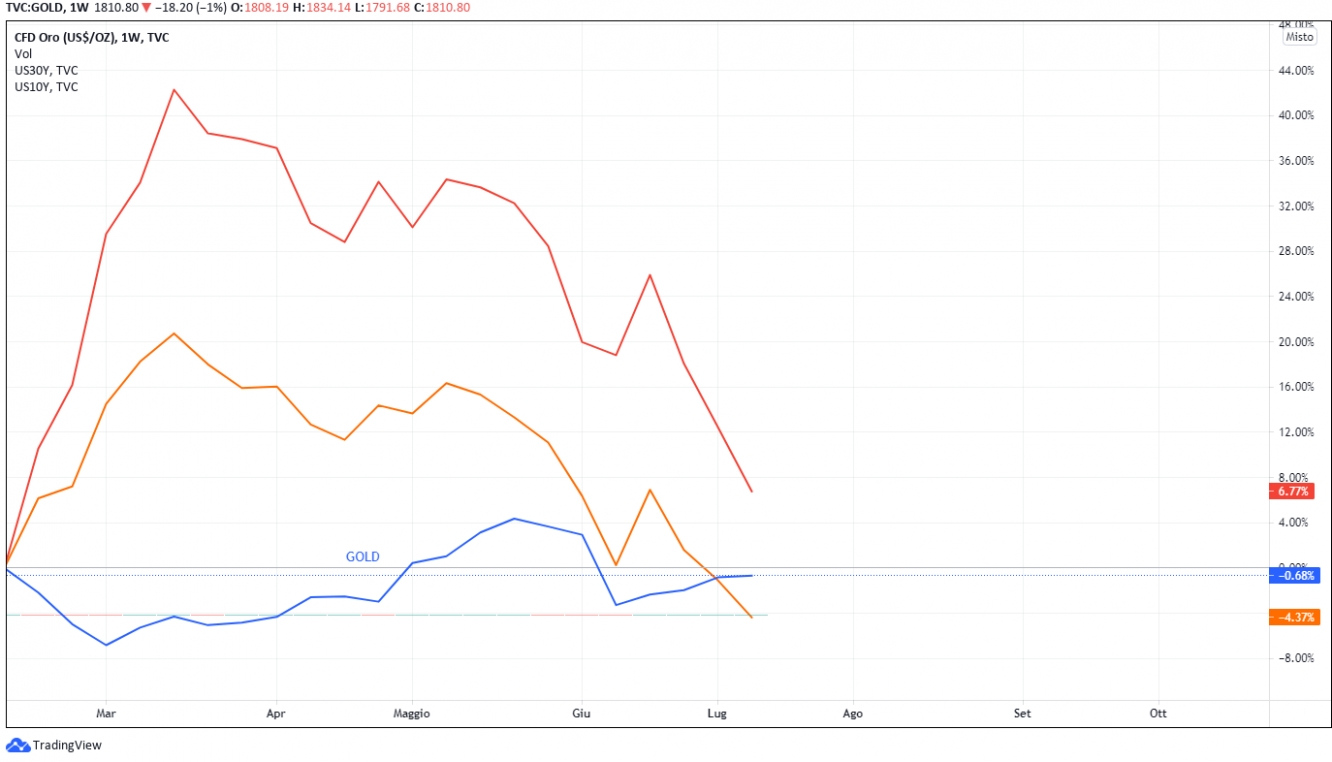 Is it the start of a recession? Don’t worry, despite the consumer confidence index being lower than expected (80.8) and there is a risk of a flattening
of the yield curve, the market cycle will first pass to a “mid-cycle” phase (quite serene) without “many” corrections or sell-offs. But be careful, this always if inflation does not get out of control!

“This article has been written for informational purposes only; it does not constitute solicitation, offer, advice, advice or recommendation to invest as such, it does not want to incentivize the purchase of assets in any way. Remember that any type of assets is highly risky and therefore, any investment decision and related risk remain with the investor. “