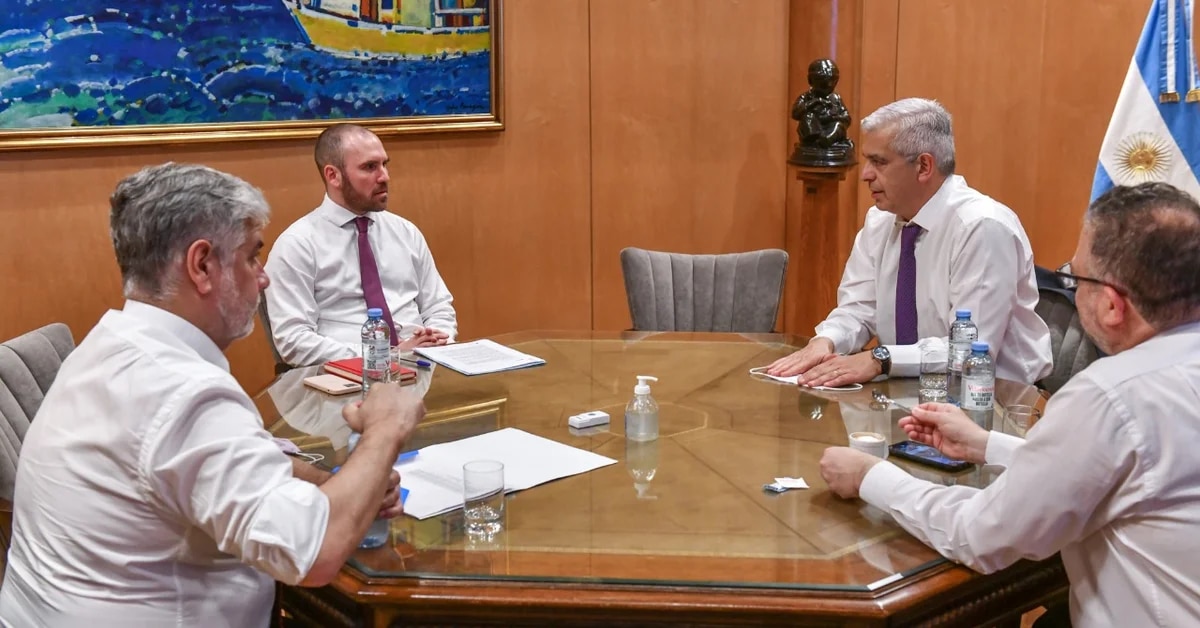 Ministers Guzmán, Domínguez, Kulfas. On the left, Feletti, who is no longer there.

The domestic dispute over withholdings has an international dimension that is as imperceptible as it is gravitating for the only main beam that is still standing in the economy: the agreement with the Fund. The internal one within the government coalition, which at times takes on the edge of a family discussion, hides the conceptual fragility with which two crucial problems are addressed: inflation and the tax issue.

In this controversy, foreign policy is combined with the reality of the one who enters the supermarket and leaves frightened. It connects the power, on the one hand, with the most sensitive nerve: the pocket. With a floor inflation of 65% for the year and food running several points higher, the recipe to stop this disarray acquires capital importance. With another magnitude, it is a phenomenon without a solution that is repeated in the world.

Alberto Fernández will have the opportunity, on Wednesday of next week, to check the proportion of this concern on a global scale. At the Summit of the Americas in Los Angeles, the Argentine president will be able to hear first-hand the opinion of the United States and Canada -two of the members of the G7- on the drama that it represents for the most powerful countries in the world to guarantee the provision of food at reasonable prices. And how, this issue can reorder strategic alignments.

It is that Putin’s invasion of Ukraine not only upset the geopolitical balance but also altered international food markets to such an extent that the risk of famine is beginning to knock on everyone’s doors. Two Argentine experts who know how to decipher what is in the corner where diplomacy and the global economy meet, warn that both the G7 and the G20 -where China and Saudi Arabia are strong- put strengthening their suppliers of foods. So much Daniel Marx as Claudio Loser they understand that, with the strangulation of the Ukrainian offer, the granary of Europe, the gaze is set on countries like Brazil and Argentina. More, when India showed their game: closed the export of wheat.

See also  Ice eyes since childhood, today he is the singer who drove teenagers crazy

In recent weeks, the president of the World Bank, David Malpass; the british prime minister Boris Johnsonand the German Foreign Minister, Annalena Baerbockmade high-impact statements to warn about the causes and consequences of this scourge.

The most powerful economies tend to react to a contraction in supply with various strategies to increase available goods, by whatever means necessary. PxQ: price per quantity, basic economics. It is the flip side of the Kirchnerist model that, faced with an increase in demand, it tramples on supply, instead of promoting it. In his toolbox are stocks, subsidies and taxes. That in, food, are equivalent to withholdings. Criticizing that reflex action may be unfair. Mauricio Macri, when he had some fiscal urgency, also reached out to the field.

However, the discussion over export rights to soybeans, corn, wheat and sunflowers in the Front for All is intermingled with the exposed fracture between the president and his vice president, which contaminates everything. In this logic it is inscribed that some “media friends and colleagues”, as Gabriela Cerruti described, press for the withholdings to be increased or, directly, to close exports. And that Hernán Letcher, the “brilliant economist” mentioned by Cristina, insist on those recipes to guarantee food security, first to the domestic market. Fallen Roberto Feletti, the vicar of that speech within the Cabinet, there are no voices left to dispute that narrative.

You don’t need it either. Alberto Fernández himself hesitates: he says he wants to but he can’t. That the retentions are a “solution” to lower prices but that he does not promote it because the opposition would defeat him. An oversight: as happened with the agreement with the IMF, the Government confirms that it does not control the main springs of its economic policy.

The Minister of Economy, Martin Guzmanand that of Agriculture, Julian DominguezThey took it upon themselves to “correct” it. Not only is it not planned, but they fear that increasing retentions will cause, in the first place, an immediate rebellion from the interior with unforeseeable consequences, and at the same time, a minimum to almost null impact on the gondolas. “The production is almost all sold, in fact these are the weeks of liquidation of the last harvest. The real impact of touching the withholdings, for the treasury and prices, is almost nil”, they explain in the Government.

According to market estimates, of a total production of 57 million tons of corn, 22 million were exported to the domestic market, exports amount to 35 million and only 5 would remain to be achieved by a change in the export duty regime. . In the case of sunflower oil, estimates speak of 60 thousand tons over 1.3 million.

But in these discussions the role that the countries that supported the agreement with the Fund is absent. “In a context of war, the G7 countries and China can make an argument not to set limits or commit surpluses. Today it is not set as a condition to approve the revisions not to touch the withholdings, but if the food crisis worsens, nobody can rule it out, “explains one of the analysts consulted.

Within the agreement with the IMF, which for Kirchnerism and an important part of the academy is a dead letter, criteria related to foreign trade were included that can be used to set conditions. The destination of extraordinary income -accumulate reserves or reduce liabilities- and the maintenance of policies that promote the development of sectors that generate foreign exchange so that the lack of dollars does not stop growth.

“Withholdings are not increased because it is a decision of the Government. The Monetary Fund would not see badly if they are increased. In fact, some technicians told us, because it would guarantee more revenue to pay them. The decision not to touch them did not change. No matter how much the IMF or La Cámpora ask for it,” replied a qualified official source.

At the same time, it underlines the ineffectiveness of this strategy to curb price increases. Just as examples, they mention calculations from the private sector that were reviewed by officials who warn that a jump from 12% to 33% of withholdings on corn would have a minimal impact on pigs and milk, foods that are “made” from that input: corn. incidence on the final price would go from 8.4% to 6.6% and from 4.8 to 3.8%, respectively.

A group of people ride horses next to a soybean plantation in a field in 25 de Mayo, on the outskirts of Buenos Aires.

With the same “tax” to the field, meat and chicken would go from 13% to 10.3% and from 13.2 to 10.4%, in each case. And in flour, raising withholdings by 21 percentage points would be equivalent to lowering $24 of the almost 300 that INDEC establishes that a kilo of bread costs. Thus, according to those estimates that brought him closer to the president, with an increase in the proportions requested by Kirchnerism – from 12% to 33% – we would be talking about marginal savings.

With skill and genius, Jorge Luis Borges described in Eleph the character Carlos Argentino as “authoritarian, but also ineffective”. A definition that comes to mind.

Alberto Fernández: “The retentions are a possible solution, but the opposition refuses to discuss it”
The Government insists on raising withholdings and asked the opposition to review its rejection of the measure
Do we have to raise withholdings to lower prices?