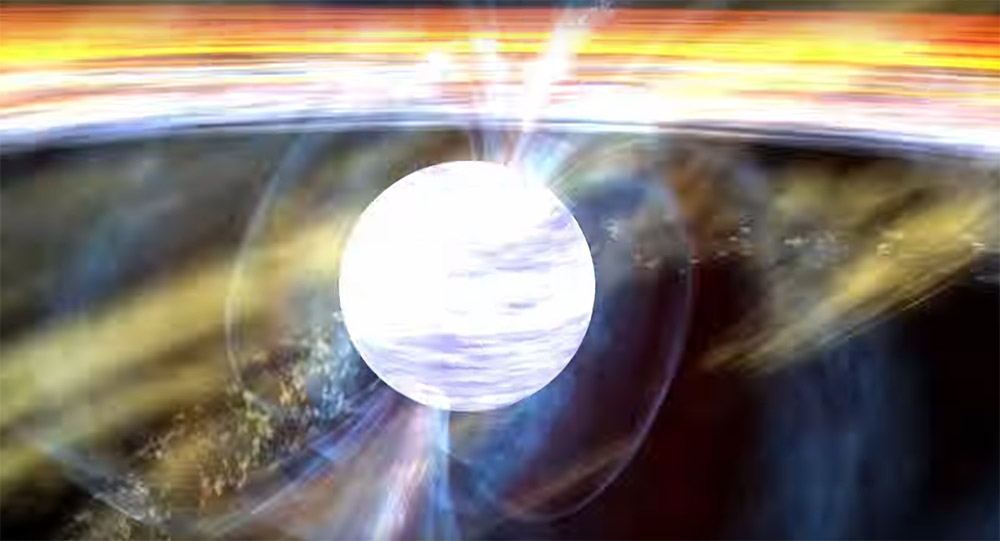 Exotic heavyweight: Astronomers have measured the mass of a pulsar a good 3,000 light-years away for the first time – and made a surprising discovery. Because the remnant of the star has a mass of 2.35 solar masses – and thus the heaviest and densest neutron star in the Milky Way to date. If this pulsar weren’t rotating extremely fast, it would have collapsed into a black hole long ago. The neutron star could owe its large mass to its companion star, from which it has subtracted matter.

Neutron stars are formed when a massive star at the end of its life cycle explodes and its core collapses. Depending on the mass, the result is then a black hole or a neutron star – a ten to fifteen kilometer small but extremely dense object. The matter in it is so strongly compressed that atoms dissolve. According to current models, such a neutron star can weigh a maximum of 2.16 solar masses without rotation, and around 20 percent more with rotation.

However, it is still unclear exactly where the upper mass limit for fast-rotating neutron stars such as millisecond pulsars lies.

“Black Widow” on the scales

Astronomers led by Roger Romani from Stanford University have now weighed the fastest known neutron star in the Milky Way for the first time. Discovered in 2017, the pulsar PSR J0952-0607 rotates on its axis at a rate of 42,000 times per minute, emitting strong radio and gamma-ray emissions. It is also a “black widow”: it is orbited by a companion star with a mass of only around 20 Jupiters, which it has almost completely eroded and destroyed over time.

To determine the mass of this pulsar, the researchers repeatedly targeted the unlikely pair using the ten-meter telescope at the Keck Observatory in Hawaii. Using a high-resolution spectrograph, they observed tiny fluctuations in the light spectrum of the companion star. These told them how this star moves, but also what gravitational influence the neutron star has on it. From this they were able to determine the mass of the pulsar.

The result: The pulsar PSR J0952-0607 weighs around 2.35 solar masses. It is therefore probably close to the absolute upper limit for neutron stars and is the heaviest known neutron star in the Milky Way, as the astronomers report. “We will look for other black widows and similar neutron stars moving even closer to the black hole boundary,” says Romani. “But if we don’t find any, it strengthens the argument that a good 2.3 solar masses is the absolute upper limit.”

But this pulsar was not always so heavy. Romani and his colleagues assume that this neutron star also started with the mass of around one to one and a half solar masses, which is typical for such star remnants. But because over time it drew more and more material from its companion star, it became heavier and heavier. “From our data, we conclude that PSR J0952-0607 has gained at least 0.5 solar masses, more likely 1 solar mass, through accretion,” the astronomers report.

Fluid made up of quarks and neutrons

The determination of the mass of this pulsar is also interesting because it can reveal what it looks like inside neutron stars. Because the matter in this remnant of the star is so strongly compressed that it is probably also the densest visible celestial object – only black holes are even denser. According to current models, the pressure inside the neutron star is so high that electrons are pushed into the atomic nucleus, fuse with the protons and become neutrons.

See also  can audiophile speakers ever get bigger?

The neutrons inside the neutron star partially decay into their basic components, the up and down quarks, together the particles form a superfluid mixture of neutrons and quarks. So far, however, it is unclear whether even more exotic particles might exist in the center of the stellar remnants, including strange quarks or the kaons composed of them. Because their formation depends on the conditions inside, determining the upper mass limit for neutron stars can reveal whether these particles can exist there.

According to Romani and his colleagues, the mass of the pulsar they have now determined speaks against such exotic mixtures. “A high maximum mass for neutron stars indicates that the mixture of neutros and up and down quarks reaches the center,” explains Romani. “This rules out many of the more exotic states of matter proposed in some models.” (The Astrophysical Journal Letters, in press; arXiv:2207.05124)