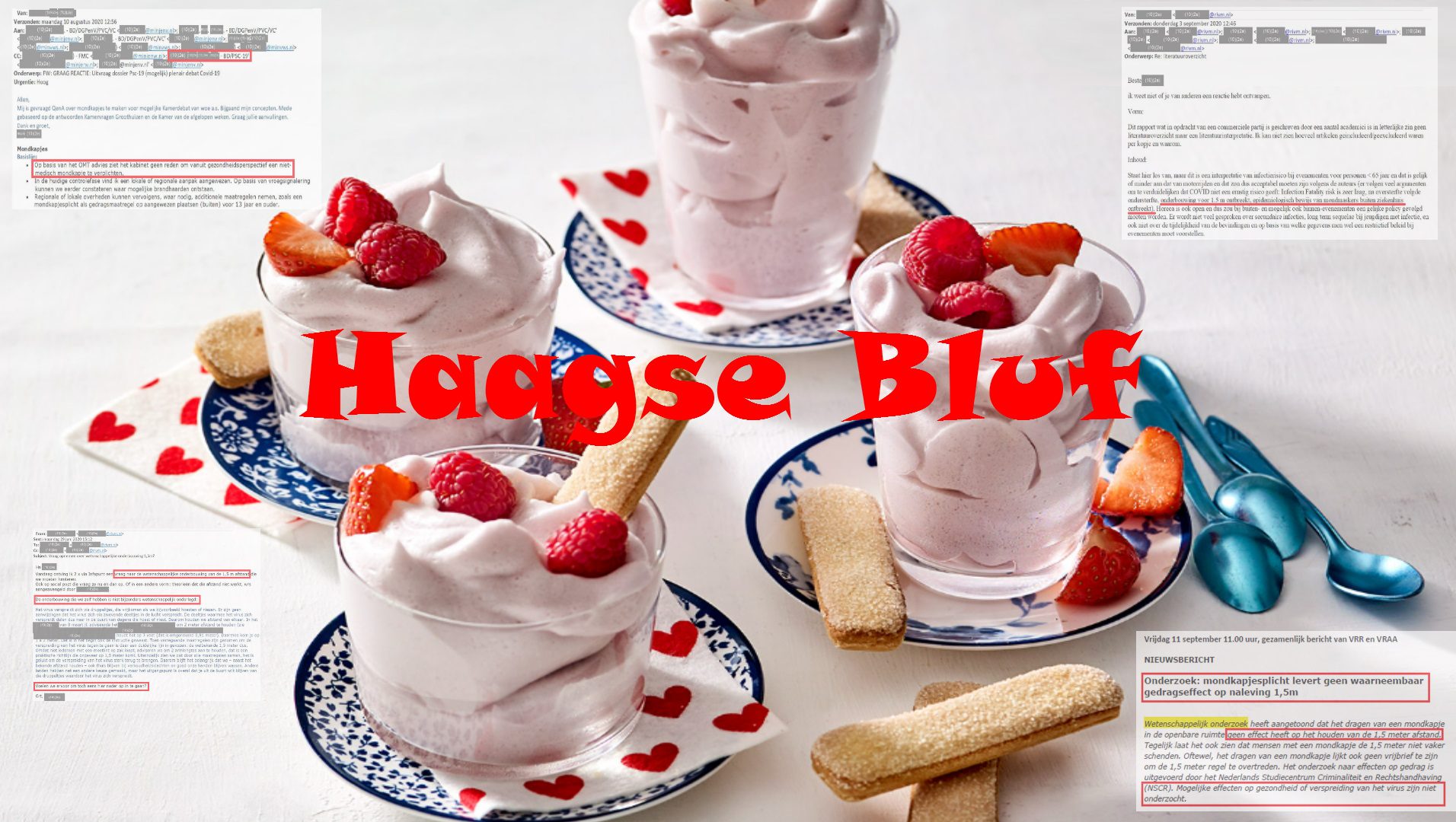 Summary of the article

Recently released WOB documents show how people knew behind the scenes in 20202 how weak the substantiation was for various measures. But this was masked to the outside world and the results of those measures were quantified in the models.

One of the descriptions that always makes me smile is “A solution in search of a problem”.

So that is a solution, which in itself can be beautiful or creative, but there is no problem for which that solution can be used. One then has to wriggle in all sorts of turns to introduce that solution.

With a new series of WOB documents that have become available, a variant of this statement came to my mind. They had a solution, but no substantiation was available that this approach would indeed have the supposed effect.

This series of WOB documents is described on Indepen with the title “WOB documents do not reveal any substantiation of measures”. Especially if you can still remember with which “conviction” the measures were announced in 2020 (and later). These should make an important contribution to greatly reducing the spread of the virus and the pressure on healthcare.

The numerical effect of the measure was entered and passed on in the models of the RIVM/Wallinga. “Measure X results in a reduction of the spread of the virus by Y%” we then heard. And afterwards we heard again that that measure had had that effect (but that the extra increase was caused because we had not adhered to the measures properly).

See also  3 OMICRON SYMPTOMS THAT MUST BE CONSIDERED IMMEDIATELY

It was out of the question if you either commented on those numerical assumptions or if you drew attention to the disadvantages of those conscious measures. Because these were never quantified when determining the introduction, while the damage – and not only to public health – became very great.

The majority of the House of Representatives also does not want proper evaluations of the measures taken. Because then it might turn out that the effect was in reality much smaller than had always been assumed and the damage much greater.

The WOB documents show that there was no scientific basis for the measures. Behind the scenes people were looking for it and they discussed how to mask that lack.

Here are a number of documents proving this:

No substantiation for 1.5 meters

An internal email within the RIVM.

No justification for closing the schools

From a communication between two ministries (including the Ministry of Agriculture, Nature and Fisheries): 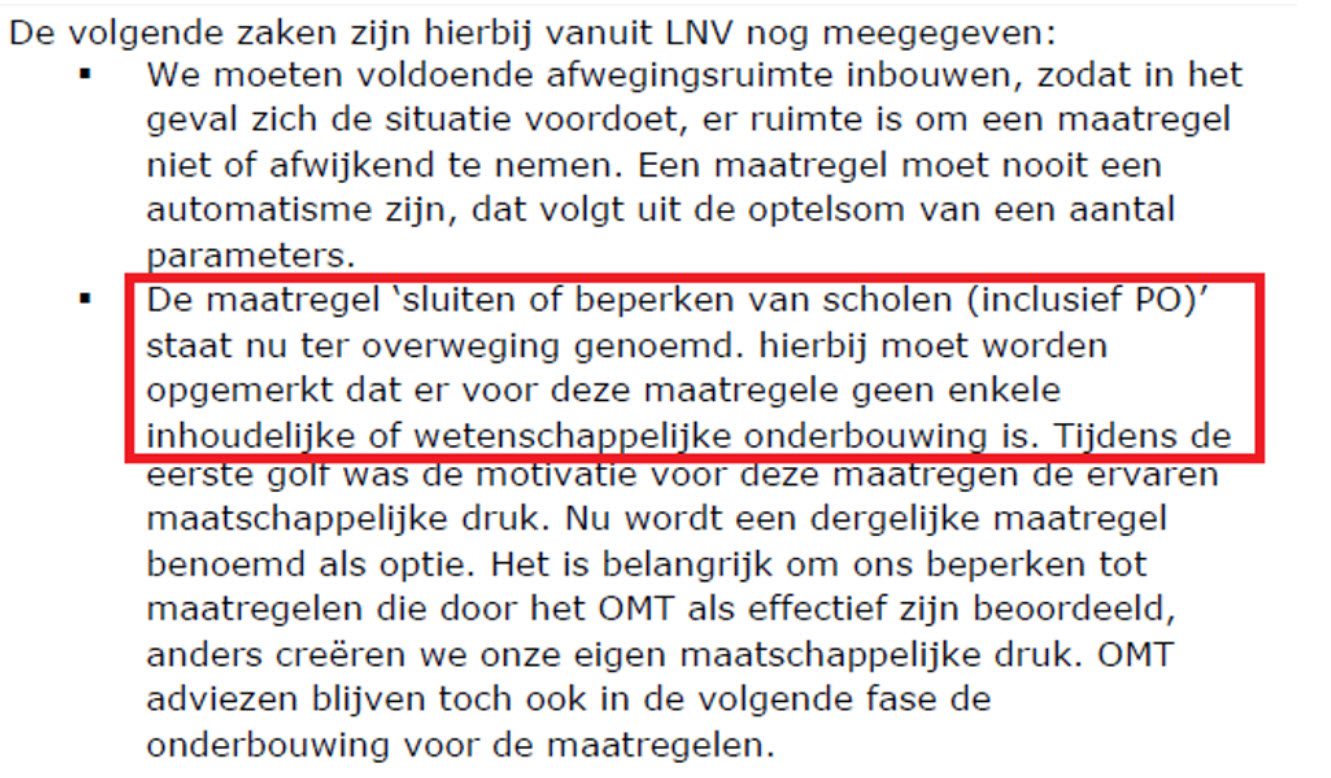 Mouth caps hang in the air

This is what people write to each other in August 2020 about non-medical mouth caps. 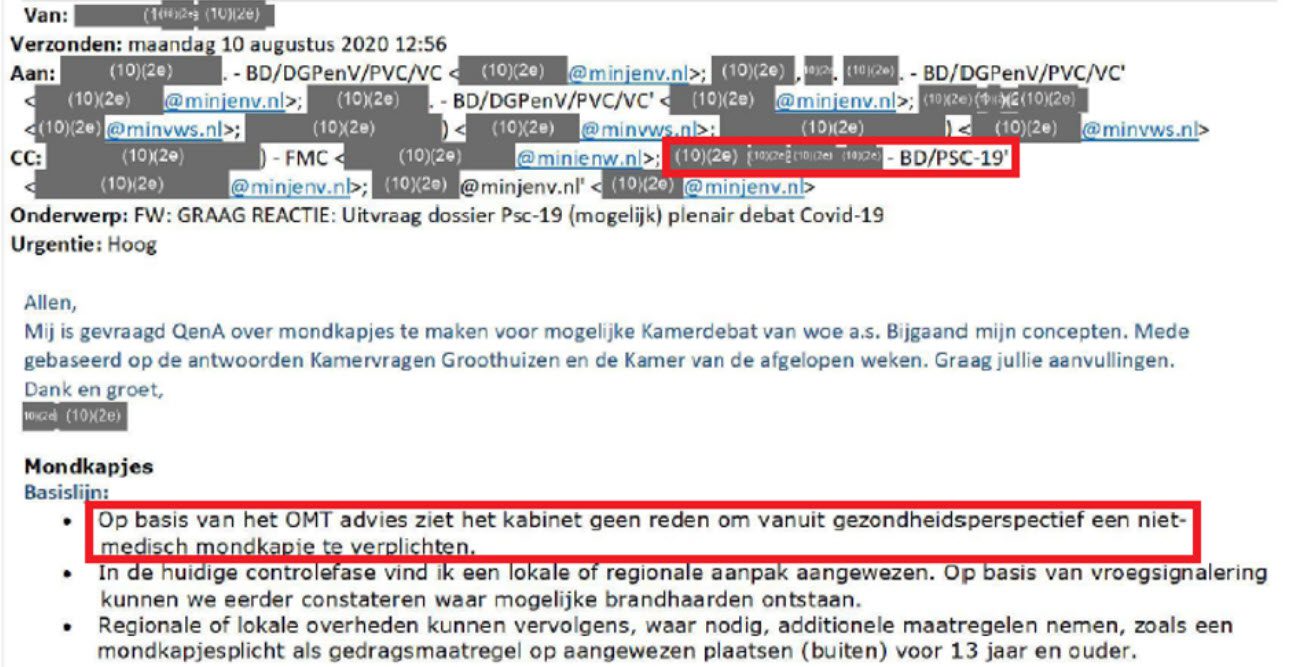 An experiment is then started, because it was assumed that mouth caps ensure that people would therefore better keep the 1.5 meters away.

Crowd control in the open air

Subsequently, in August 2020, research was carried out into whether wearing a mouth cap ensures that people come closer to each other than if they do not wear a mouth cap. The study shows that there is no effect, as described below by the news item from the security regions of Rotterdam and Amsterdam. At the bottom it is stated that in both cities they are working in September 2020 to limit the crowds. After all, everything had to be done to ensure that people would not come within a radius of 1.5 meters from each other. 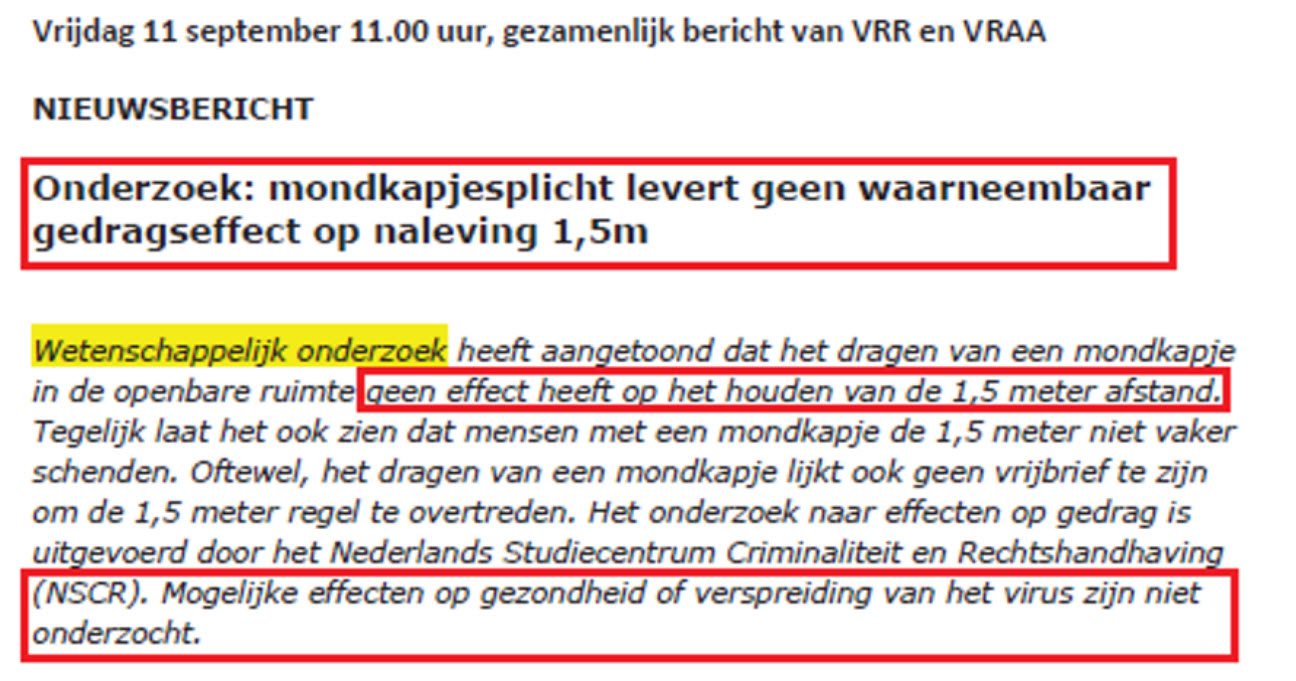 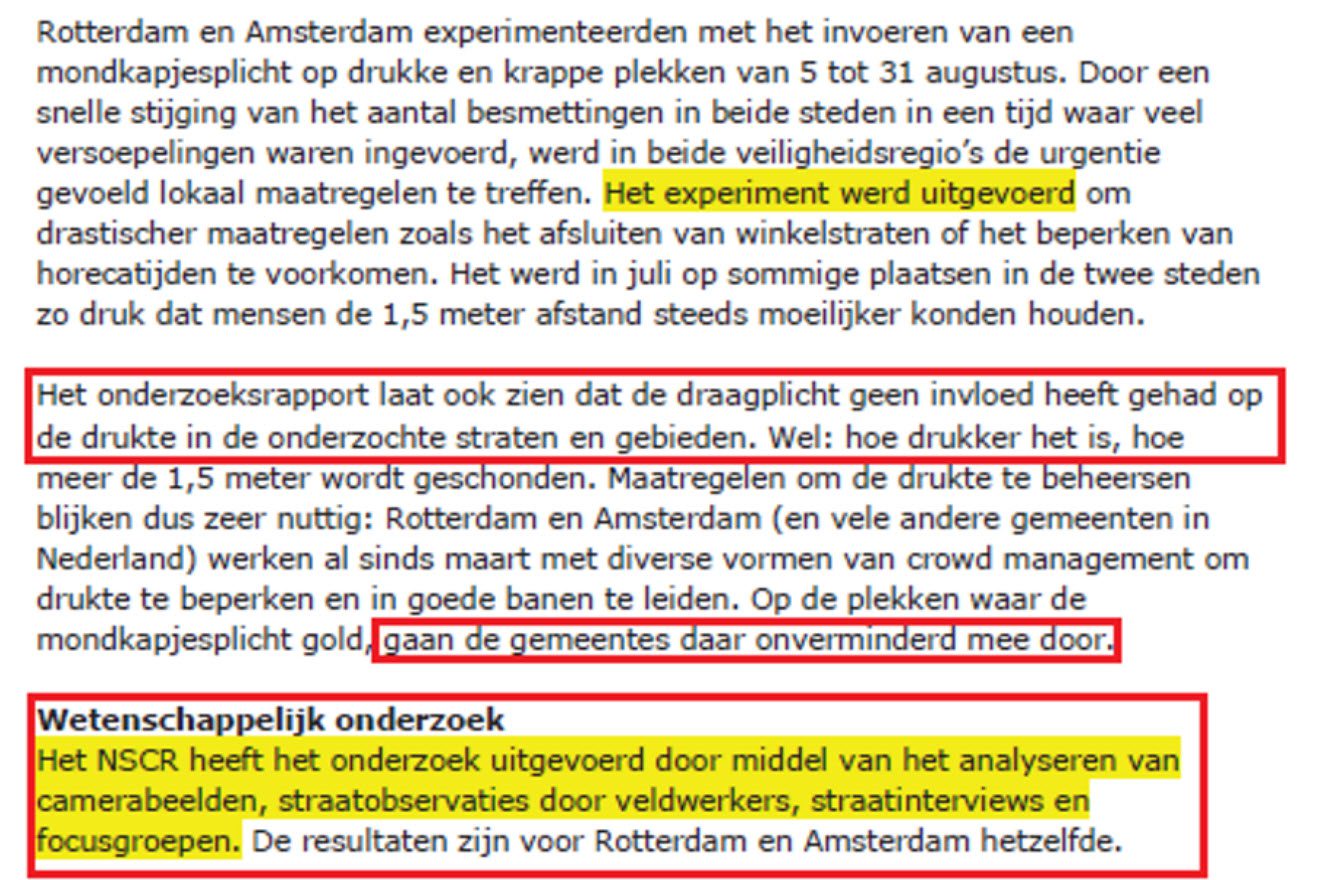 In addition, realize that at that time, when lawsuits were filed against certain measures, the judge took the position that the measures were well substantiated. After all, that was what RIVM/VWS always said back then!

I conclude with three photos that give a picture of the world we ended up in at the time. I don’t know whether to laugh or cry… 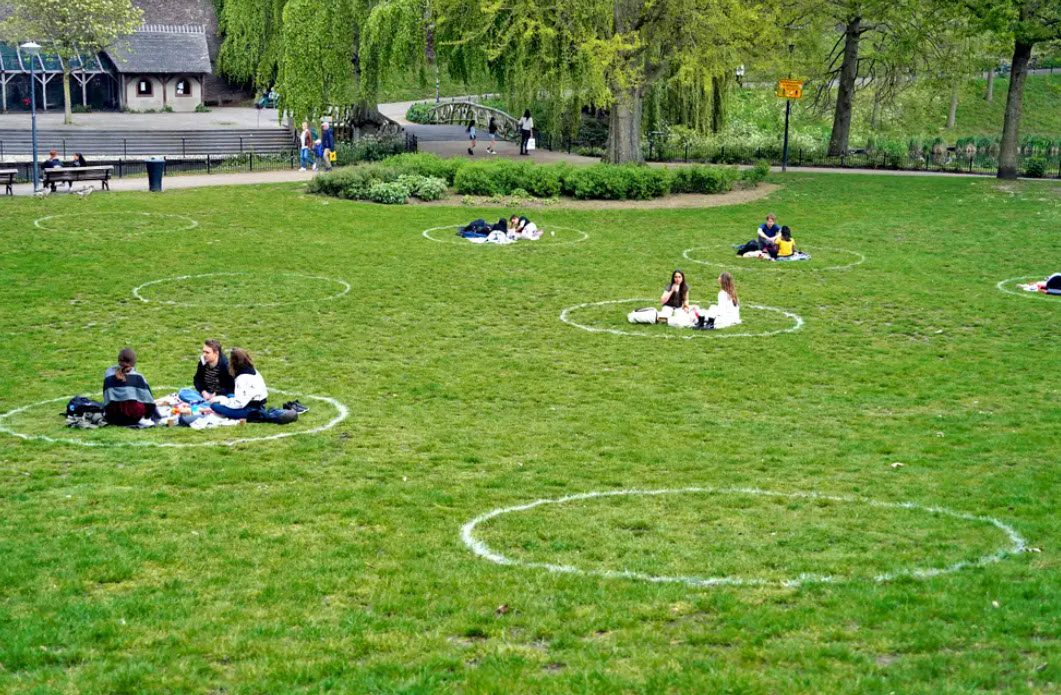 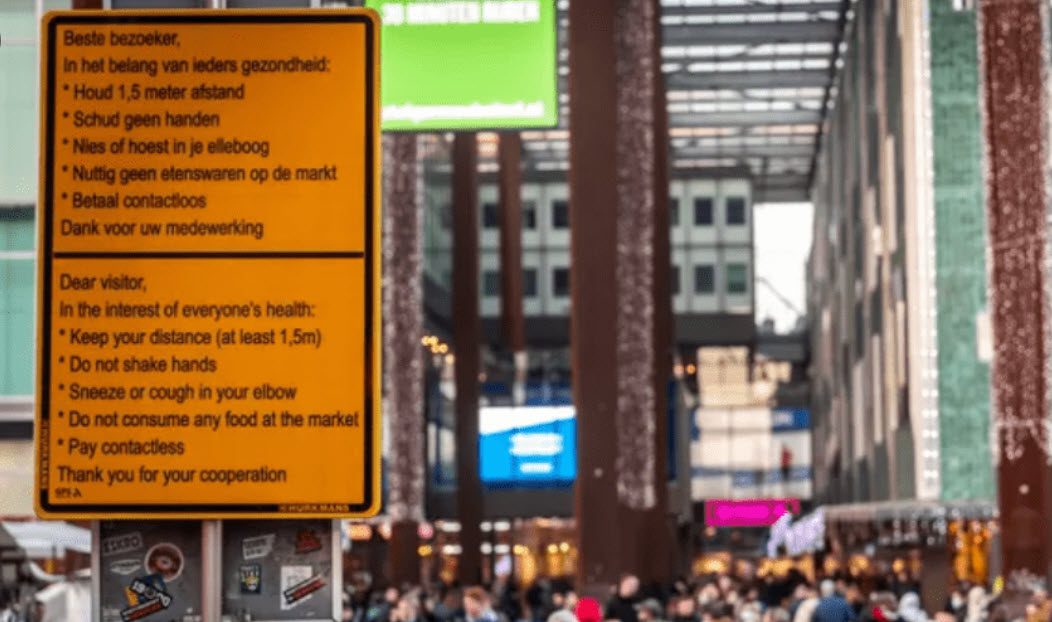 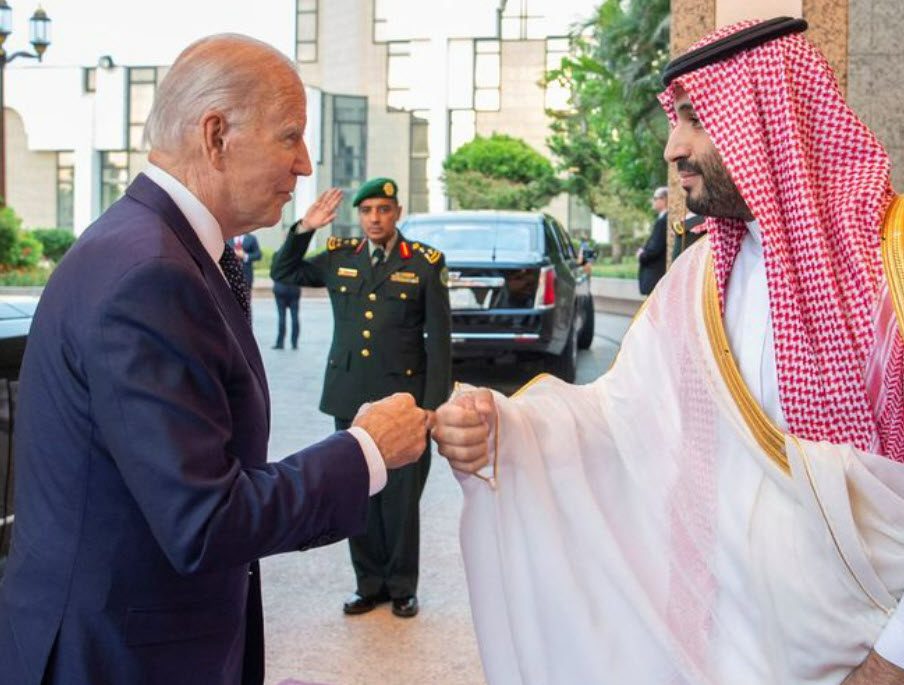 Very curious what will emerge from the WOB documents that VWS, despite court rulings, does not want to publish.