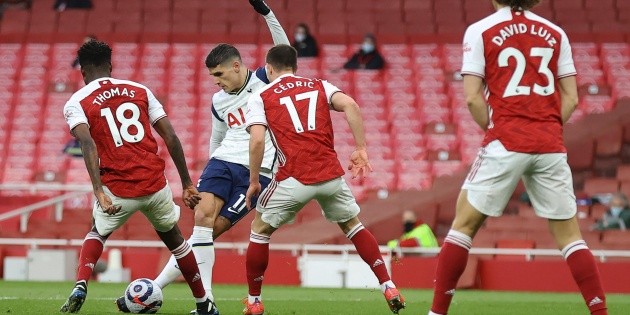 The former River continue to talk in Europe and this Saturday the one who appeared in all the sports media reports was Erik Lamela. The flyer, who recently got together with his cousin Agustín Palavecino to exchange T-shirts, was awarded for having scored the best goal of the season in the Premier League, which had Manchester City as champion.


The winner of the award was the unforgettable rabona in the London classic between Tottenham and Arsenal. With the game zero to zero and the area populated with red jerseys, Lucas Moura had no choice but to give it to Lamela who, before the departure of two Arsenal defenders, invented a magnificent left-handed hook that took goalkeeper Emiliano Martínez by surprise, who flew but could never get it out. Paradoxically, Coco was sent off in that match in the second half and Arsenal ended up turning it around.

For some it is a barely used resource, but for Lamela it is an emergency plan to resort to when the play is complicated or it arrives badly trodden. It is not the first time he has scored a goal from rabona in his career: He made an even more spectacular one to Asteras Tripolis in October 2014 and also one to Gimnasia in 2009, when he was just 17 years old and played in the River inferiors.