the fun connection between Predator 2 and the Disney+ prequel

Preythe prequel to the cult film Predator, plunges us into the heart of the 18th century. But another film of the super saga Predator had already announced it.

With Preydirector Dan Trachtenberg has managed to resuscitate the universe of Predator. Our enthusiastic review of Prey-what of Predator is globally due to the simplicity of its concept, which decided to catapult the famous alien hunter into the heart of 18th century Americafacing Native Americans and European settlers.

If this idea may seem like a surprise to some, the franchise Predator nevertheless very quickly clarified that John McTiernan’s original film did not represent not the alien’s first interaction with humans. Meanwhile, comics and movies Alien vs Predator explored this data in more depth, and had fun linking the creature to particular parts of the story. Explorer or even colonizer, the Predator is now linked to a particular symbolism, very relevant in the case of a film about a people (the Comanches) flouted by history.

However, Prey clearly had fun play with some easter eggs from the saga, despite their large temporal differences. In fact, there is even precise detail of Predator 2 which announced Dan Trachtenberg’s film in 1990.

The Captain of America, it’s me

Indeed, when Mike Harrigan (Danny Glover) infiltrates the alien ship at the end of the film, he takes the opportunity to extend the mythology of the franchise (this is where we see for the first time a skull of alien). Since he succeeded in killing the Predator during his hunt, Harrigan is rewarded by the other members of the crew with a weapon: an old pistol, on which is engraved “Raphael Adolini 1715”. 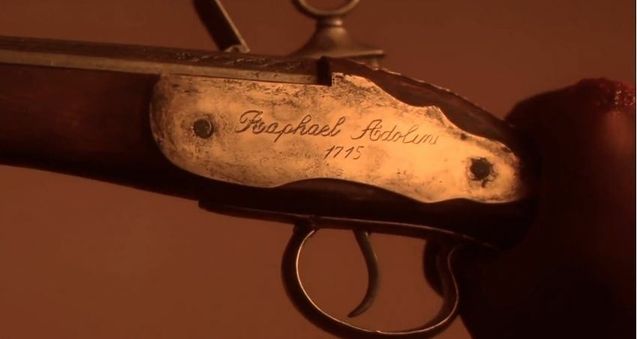 In Predator 2, this detail serves mainly to make clear that the aliens hunted on Earth long before their meeting with Schwarzenegger. However, according to the synopsis of Preythe spin-off that follows Naru’s Adventures takes place in… 1717. One of the injured colonists ends up giving his weapon to Naru, and it is only at the end of the film that we discover the same inscriptions there.

Therefore, it must be understood that the Predator race has recovered the gun after the events of Preymaybe even attacking again this heroine who was able to kill one of the aliens (which the final image of the end credits announces).

The creators of Prey therefore drew on the extensions of the universe Predator, even if it means potentially disrupting the canon. In fact, the pistol’s easter egg was in-depth in the comics Predator : 1718. We discover that Raphael Adolini was a captain of a pirate ship, who had to face a mutiny because of a stolen crate of gold.

Back to the turfu

Bad luck, a Predator also chose to jump into the fray, and defend the captain to then be able to fight against him. While much of the crew was decimated, Adolini was shot in the back by the last living member of his team. In his last breath he gave to the Yautja (nicknamed Greyback) his gun, telling him “Take it”. During the events of Predator 2the creature repeated those same words to Harrigan.

The comic book and the 2022 film are thus the only two stories in the franchise to take place during the 18th century, having this pistol as a family link. Now, a small film on the Predator in the Middle Ages would not be refused, Hollywood…