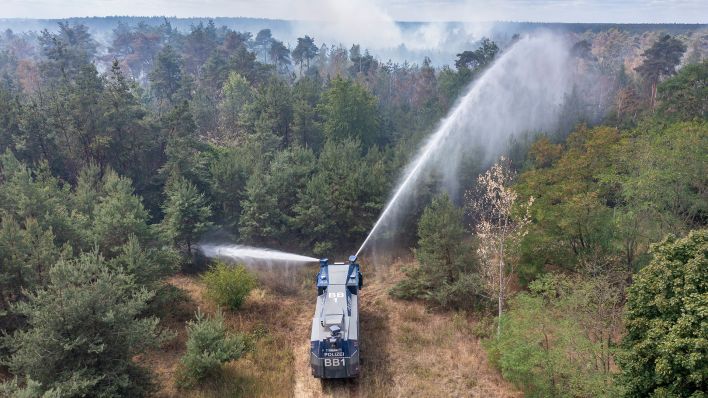 The forest fire near Falkenberg has been raging for days. The situation had eased overnight, but some of the hot embers turned into open fires on Thursday. More forces and technology should help.

After a slight all-clear on Thursday afternoon, embers flared up again in the late afternoon. “The current challenge in the major fire in Kölsa-Rehfeld is still to detect embers in good time and then prevent open fire from developing,” said a spokesman for the district in the evening. This happened several times during the day. Overall the situation is stable. “But there is still no reason to sound the all-clear.”

The forest fire broke out on Monday and very quickly spread to around 800 hectares. According to the district, firefighting is currently covering an area of ​​550 to 600 hectares.

On Thursday, 300 workers from several parts of Brandenburg were on duty until the evening hours. They were supported by a Bundeswehr tank. He laid paths for the firefighters through the rough terrain and cut aisles so that flames could no longer spread so quickly. Another tank is expected on Friday.

In addition, the Bundeswehr is deployed with seven helicopters for reconnaissance and extinguishing, as it was also said. Transport helicopters should be in the air until 10:00 p.m. in the evening, and then continue on Friday at 8:00 a.m. The helicopter’s water tanks hold up to 5,000 liters. The water is drawn from the nearby Kiebitzer See, which is currently closed to bathers.

Police water cannons and Bundeswehr tank firefighting vehicles also support the work on site. A fire fighting vehicle from Saxony is helping to fight fires in areas polluted with ammunition.

Federal Environment Minister Steffi Lemke and Federal Minister of Agriculture Cem Özdemir (both Green) have meanwhile promised help to the district. The federal government is supporting the federal states as best they can in the fight against the flames, Lemke told the German Press Agency (DPA) on Thursday.

Özdemir also told the “Rheinische Post”: “Where I can support the countries in the fight, I will do that.” Fighting the fire quickly is now crucial. “The emergency services are already doing great things here,” said Özdemir. Both emphasized that the federal government wants to make forests more resistant to the consequences of climate change in the long term.

In the Walbrandzentrale Süd (Teltow-Fläming), the employees are highly sensitized. “We continue to perceive smoke from the area of ​​operation,” said the state’s deputy forest fire protection officer, Philipp Haase, of the DPA on Thursday. Now the focus must be placed on the surrounding areas in the forest fire area in order to be able to react quickly to new fires.

“Nothing would be more fatal than if we said now: There are enough fire brigades because of the major damage situation.” The head office is in constant contact with the Lausitz control center in order to analyze the fire situation precisely and to be able to distinguish between possible new fires and plan operations.

For the time being, the administrative staff in Elbe-Elster is sticking to the so-called major damage situation, because regional emergency services and capacities are still urgently needed and the situation cannot be managed alone, it said on Thursday evening.

Expert: lagging behind in forest firefighting

New training concepts and documents are being worked on together with fire brigade schools. However, one is being “overtaken on the right” by the current development. Held is an expert in forest risk management at the European Forest Institute (EFI).