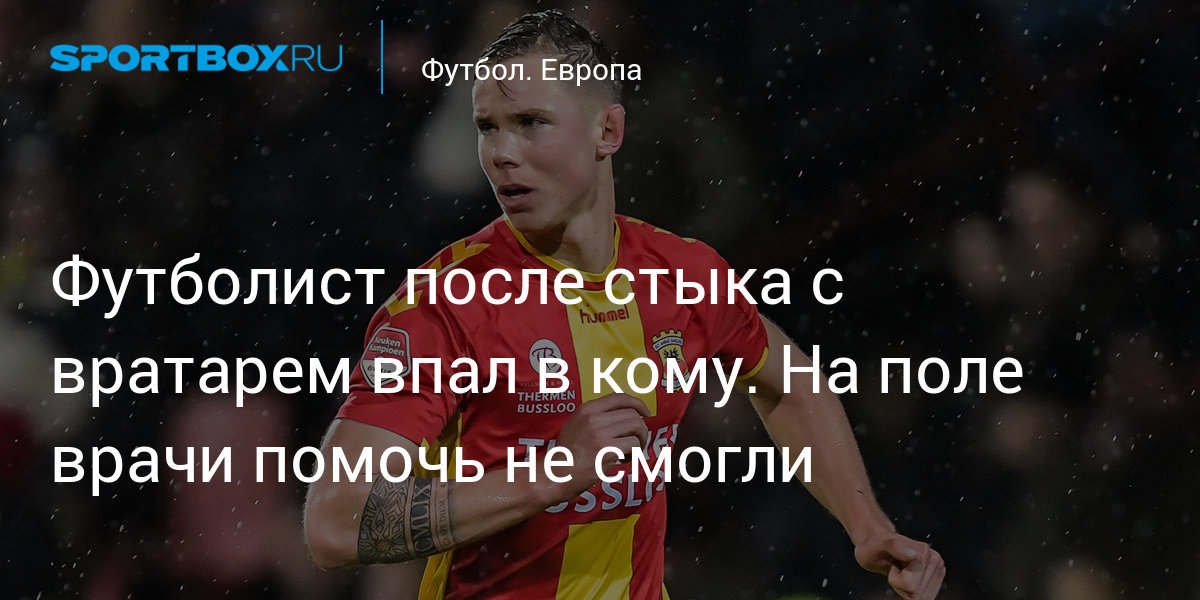 The footballer fell into a coma after a collision with the goalkeeper. On the field, the doctors could not help

The newcomer of the club was urgently hospitalized already in the 11th minute of the match.

There are no football players who have not been injured during their professional career. Of course, any player does not like to miss games for this reason, but it’s doubly disappointing when an injury prevents you from playing in the match of the team you are on for a week without a year.

Recently, a defender found himself in such a situation, promising to return his team to European competitions.

Hard collision with the goalkeeper

The Moldovan club “Zimbru” dominated the local championship in the 90s. The team managed to win eight championship titles before the era of Sheriff’s dominance began. But now things are not going well for the Bison. The team from Chisinau last season retained its registration in the Super League only in the play-off.

In the off-season, the club made radical changes. In the summer, the team received a new general director and head coach, with the participation of which many newcomers came to Zimbru. One of the important acquisitions was the Dutch defender Donny van Iperen.

Upon arrival in Chisinau, the defense player, who has played for Twente, said that he wants to return the team to European competition after a disastrous season. But all his plans were destroyed after the match of the second round of the Superleague against the Dynamo-Auto team.

At the very beginning of the debut game as part of a new team, the defender went into the opponents’ penalty area when drawing a standard position. During the canopy van Iperen rushed to the area of ​​the 11-meter mark. At this moment, the goalkeeper of the rivals advanced towards him. Both players looked exclusively at the ball and did not see each other. As the ball began to descend, the players collided at full speed. As a result of the contact, Donny hit his head hard on the goalkeeper’s shoulder and fell onto the field.

“We are all shocked by what happened”

There are enough such collisions in every game, but the vast majority of them do without serious consequences for the players. For the Dutch defender, things turned out differently. He could not get up from the lawn, as he almost immediately lost consciousness.

The first to help van Iperen was the goalkeeper, whom he had encountered a moment before. The gatekeeper tried to open the player’s mouth to avoid the tongue getting stuck. A few seconds later, the doctors of both teams arrived in time to help, but it was not possible to bring the player to consciousness. Donnie was rushed to the hospital in Tiraspol by ambulance.

After such a shocking collision, the players, finishing the match, probably did not even think about some kind of bright football. As a result, the match ended in a goalless draw. Zimbru head coach Vlad Goian after the game also spoke more about the defender who ended up in the hospital than about the result of the meeting.

— Everything is very bad. I don’t even want to discuss it. This is very bad… We are all shocked by what happened. About the match? It ended 0-0, maybe it’s a fair result, maybe not. We didn’t score a penalty. It doesn’t matter anymore, the most important thing is that Donnie is healthy, ”the team’s official website quotes the words of the coach.

Delivered to the Tiraspol hospital, van Iperen, being unconscious, could not breathe on his own and fell into a coma. He was hooked up to a ventilator. In order to receive better treatment, the player was taken to the capital’s medical center, where he is still located.

The day before, encouraging news appeared on Zimbru social networks. According to the results of the examination, it turned out that Donnie managed to avoid hemorrhage and swelling of the brain. His condition has stabilized and there is hope for a happy ending to this story.

“After the examinations carried out this morning, the medical team, consisting of the best specialists in the country, announced that nothing threatens the player. Although he is still unconscious, the doctors have informed us that Donnie does not have an intracranial hemorrhage and is not in a coma. Today the player showed the first signs of the return of consciousness, and this gives us even more confidence that everything will be fine. Donnie, we are with you, be strong! the team said in an official statement.

Against the backdrop of encouraging news, Zimbru announced an action to support the footballer in their social networks. All matches are expected to stop at the fifth minute of the match so that the players and fans can support the defender in trouble with applause.