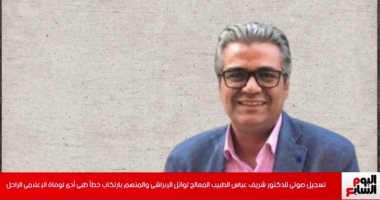 The first response from the attending physician to Wael El-Ibrashi: I did not cause his death (video)

Dr. Sherif Abbas said that he filed a complaint with the Doctors Syndicate to investigate Dr. Khaled Montaser because of the accusations that Jadafa published on the social media, and he will be investigated about these lies, according to his description.

Dr. Sherif Abbas affirmed that he offers his deepest condolences to the family of the great media personality and the owner of the enlightenment thought in Egypt and the Arab world, adding that it is absolutely not correct to throw blatant charges without it, and the medical and judicial investigation leads to proving the existence of a medical error or not, and before that no one has the right to If any accusation of any kind is directed against the treating doctor, especially since no medical error has ever occurred in treating the case of the journalist Wael Al-Ibrashi, and all the medicines used are all registered and circulated in the Arab Republic of Egypt and the Ministry of Health.

Dr. Sherif Abbas also responded, in exclusive statements to “The Seventh Day TV”, about Dr. Khaled Montaser’s accusations against him, saying: All that Dr. Khaled Montaser said was false information, and my clinic in Menoufia was officially closed by my own will, because I transferred my life here for several years, and closed it at an official request from me. .