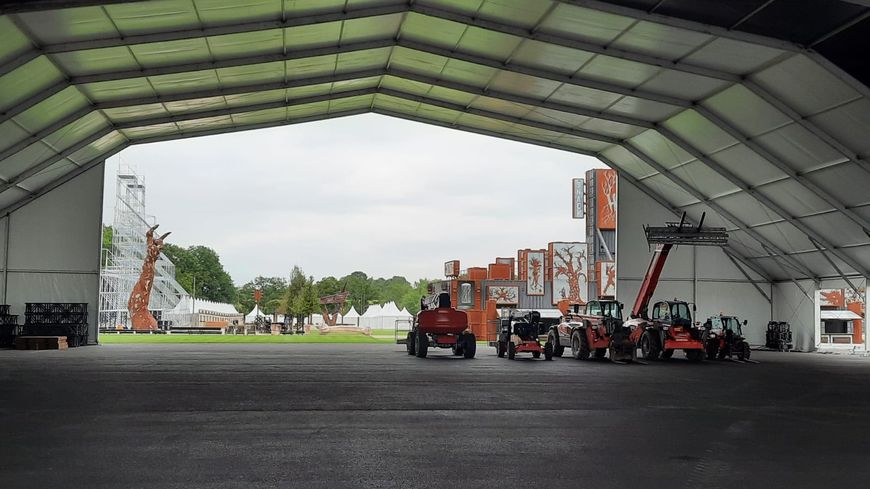 the festival site is being transformed, hundreds of technicians at work

The comings and goings of trucks, forklifts and other machines are incessant on the Hellfest site. Twice canceled due to the health crisis, Europe’s largest extreme music festival – which will close to 50 million euros in turnover – is about to strike a blow by organizing two editions in one, from June 17 to 26. More than 350 groups including Metallica, Scorpions or Guns N’Roses and nearly 450,000 partygoers spread over 7 days, a logistical challenge for the technicians who are busy setting up the structures, the stages and preparing for the arrival of the public. “It’s quite colossal as a construction site“, summarizes Eric Perrin, employee at Hellfest Productions. Report.

The metamorphosis is already striking. The cathedral is not yet erected but we can already guess its shape thanks to the huge scaffolding structure that has just been completed. A stone’s throw away, the HellCity Square, a sort of district which brings together around ten stands, including that of tattoo artists, is taking shape.

“It takes a long time to assemble because there are a lot of accessoriesconfides Benjamin Boisliveau, responsible for the assembly of these streets inspired by Camden, in London. There’s a rising team the Algecos which will become the stores, another sets up scaffolding and then we install all the scenery directly on the scaffolding.“Until the day before the Clisson site opens to the public, hundreds of technicians will take turns every day to ensure that everything is completed on time.

“It’s positive stress.”, smiles Valentin Beauvineau, assistant to the technical director. The teams are preparing to receive the two largest stages in Europe which will be set up next to each other. “We are waiting for the arrival of the surveyors because the stage is so imposing that it must be installed to the millimeter so that everything goes well“, sums up the man who has worked for Hellfest for eight years.

A story of days before the semi-trailers follow one another by the dozens. In the meantime, the technicians who have already installed the artists’ prefabs are busy setting up a special dressing room. “Metallica had a specific request for the provision of dressing room spaceconfirms Valentin Beauvineau. We didn’t have the space, so a scaffolding platform of 300 square meters is built. We are going to put a kitchen, toilets, a rehearsal room there and it will be used by all the headliners.” Just that !

Giant pockets so as not to overflow the sewers

New lawn, installation of palisades at the level of the cathedral, new look for the statue of Lemmy Kilmister and for the parking lot that can now accommodate 13,000 vehicles, Hellfest employees took advantage of the health crisis to improve the site. All they have to do is switch to “configuration festival“. One hell of a business.

“The city that treats 350 cubic meters of wastewater a day cannot take all that Hellfest rejectsdevelops Romain Piot, in charge of water and sanitation management. We therefore install 12 huge pockets of 35 meters by 6 meters, in addition to the buried tanks which are used to store everything before the waste water is gradually discharged. It avoids overflows as it happened, a very long time ago, at the beginning of the festival.“

More than half a thousand urinals and toilets are also being installed. Drinking water fountainsso that people use a little less plastic bottles“, says Romain Piot and enough to accommodate some of the 5,000 volunteers – including 80% will be present over the two weekends. “So we have to prepare and organize everything, especially in terms of schedules, so that everything goes well.“, comments Eric Perrin, communication manager at Hellfest Production.

Up to 600 intermittent workers and technicians will take turns on the Clisson site before, during and after this “edition of the century” as Benjamin Barbaud, the creator of the event, described it. With a wish: “If you don’t hear from me, it will mean that the job will have been done well“, blows Romain Piot. To be sure, we will have to wait until the beginning of July.

Read also
In Clisson, Hellfest diehards bring the spirit of the festival to life