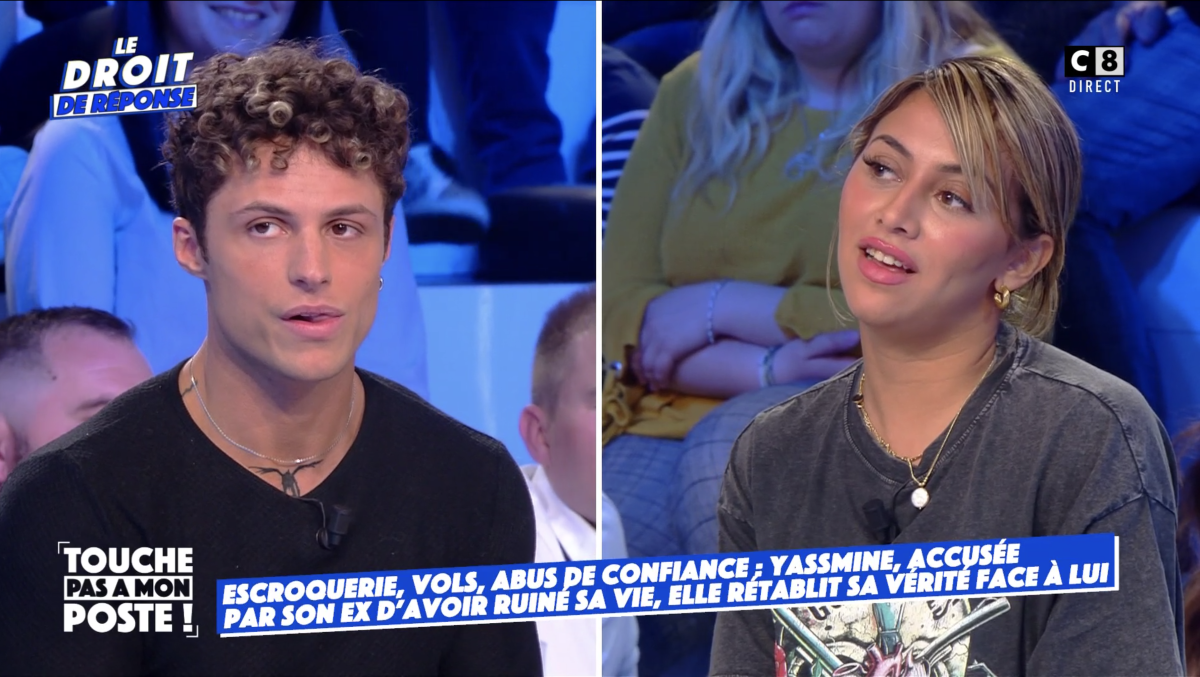 the explanations between Yassmine B, escort girl and Sacha, her ex-boyfriend, scandalize internet users

A story worthy of a thriller. This Thursday, April 28, Cyril Hanouna and the TPMP team returned to a highly publicized incident on Instagram for ten days. Thefts, threats, scams, blackmail and even cyberbullying… “Yassmine B.”, a young Parisian escort-girl, allegedly fleeced those around her by pretending to be a wealthy heiress. Among his alleged victims, Sacha, 23, a former candidate for “The Voice”. The young man and Yassmine B. were invited to the set of the show this evening and they were able to chat live. Between sometimes confused explanations and (very) intimate confidences, these exchanges exasperated TPMP fans.

A story worthy of “The Tinder Scammer”, a famous Netflix series. This Thursday, April 28, at the end of the show, Cyril Hanouna and the TPMP columnists received Sacha, 23, former candidate for “The Voice”. On April 18, on his Instagram account, the young man publicly explained that he had been the victim of a certain Yassmine B., with whom he had been in a relationship for almost two months. We then discovered that old acquaintances, childhood friends or ex-boyfriends of Yassmine B., a 23-year-old Parisian escort girl, accused the young woman of having invented her life, lying to everyone to pretending to be a rich heiress, robbing everyone around her, scamming and living a dream life with this money. Since the complaint and the unveiling of Sacha’s story on social networks, these other victims (about thirty across France) have come forward and confirmed the practices of the young woman. Six of them also filed a complaint for theft, fraud, cyberbullying or blackmail. This case has had a resounding echo on social networks and Sacha told his story in the columns of Parisian on April 27. The former candidate of “The Voice” was this evening invited on the set of TPMP to return to his story.

“When we have couple problems will we have to go to TPMP?”

Today driver of VTC, the young man, quite uncomfortable at first sight on the set, presents himself as “spokesperson for many victims”. He explains that he shared the life of the young woman, with whom he was very much in love, for almost two months when he discovered her activity as an escort-girl (Yassmine B. would have presented herself as a military nurse during their meet). After this discovery, and following many doubts as to the real personality and the real way of life of his girlfriend, Sacha decides to leave her on the spot and asks her to take her things. According to him, the young woman would have taken her mother’s jewelry and her late father’s clothes in her suitcases. She would have even already used her credit card without warning him, several weeks earlier. Yassmine B. would be a chronic liar, especially about her social origins. Without accusing him directly, Sacha also explains that he caught STDs. For her part, Yassmine B. accuses Sacha of defamation and pushing her to suicide. The young woman, also on set, was able to defend herself and justify certain practices by confiding that she had lived a difficult childhood, with an absent father. “We come from a very modest background, and I suffered teasing when I was a child because I had an illness that prevented me from speaking”, she justifies herself.

All these explanations and these live confidences have embarrassed many twittos who have compared TPMP to a real court.

VIDEO – Valérie Bénaïm: this limit set for Cyril Hanouna, which he respects unceremoniously