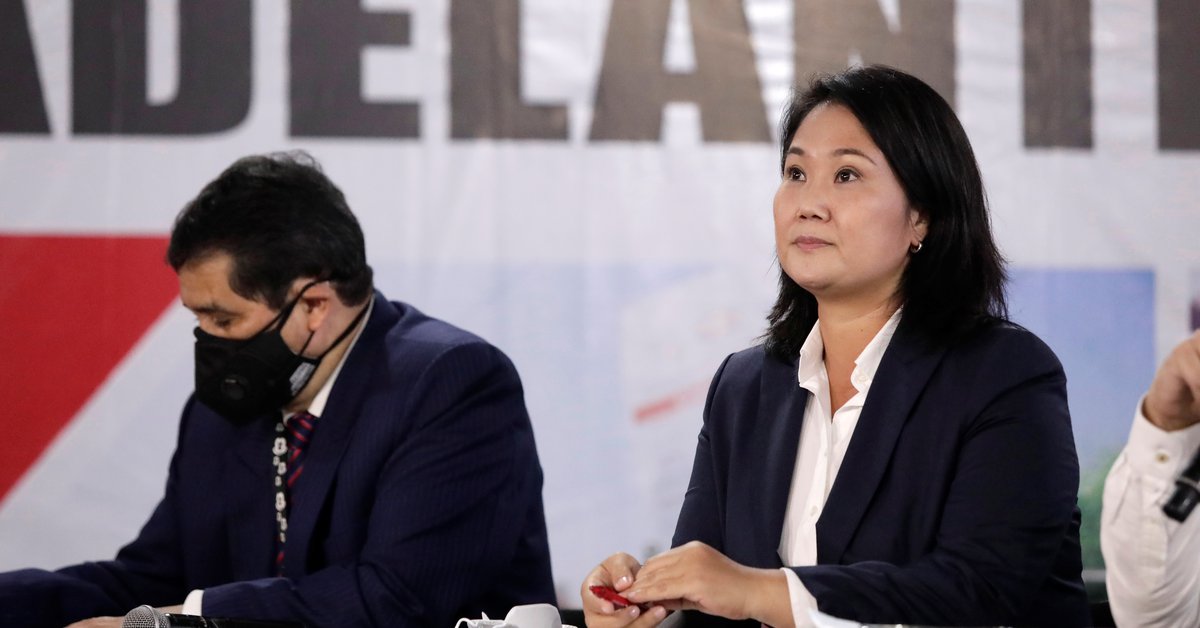 Keiko Fujimori’s team showed examples of the electoral records that it considers should be invalidated and that, in that case, they could alter the results of the vote in Peru, currently favorable to candidate Pedro Castillo.

The leftist leader has an advantage of 71 thousand votes with 99.13% of the minutes counted. However, The Fuerza Popular campaign does not seek to reverse the result with that 0.87% of remaining tables (something statistically very difficult), but with the challenge of votes already counted, especially corresponding to areas where Castillo obtained an overwhelming advantage.

The number of claims is unprecedented. In the tight 2016 election that Fujimori lost to Pedro Pablo Kuczynski by 41,000 votes, 29 polling stations were challenged (apart from the claims originated on election day). In 2011, when Fujimori lost to Ollanta Humala, only two objections were filed before the electoral justice.

And is that several of the most prestigious legal studies in Lima made their teams available to investigate the acts of rural areas and look for inconsistencies, as confirmed by several lawyers involved, before the deadline on Wednesday to present the claims expires. Participation is legal, as long as the professional contribution is declared within the campaign accountability.

The 802 minutes presented are divided into five categories.

The total number of minutes contested by Fujimorism

This is the most frequent reason among the claims presented by Fujimori. In 503 minutes, with a total of 125 thousand votes, the campaign team assured that the signatures of the documents are different from those that appear in the public records of some board members.

Discrepancies in the signature of two board members

Among the examples disclosed, there are two people from the department of Amazonas with similar signatures but abbreviated with respect to the original signature that appears in their documents. In the case of Yoel Alcántara Sarmiento (the second signature in the image), the citizen recorded a video to show that he did sign the documents and assured that he participated impartially throughout the day, in the presence of representatives from both parties.

The jury must decide if these are acceptable differences corresponding to the same person or if they are changes that suggest that it was an identity theft.

Popular Force presented 132 minutes that considered suspicious because the party obtained 0 or 1 vote among all the votes.

Tables in which Fujimori did not obtain any vote

The cases are statistically possible, since the minutes correspond to areas in which Castillo obtained more than 80% of the votes in the entire region. For example, there were minutes in Miami (Florida) in which the reverse scenario occurred, and Castillo did not receive any vote in favor.

This case is unlikely to receive the backing of the juries, since the electoral law indicates that all claims of this nature must be resolved at the table, with the permitted presence of the representatives of each party. It would be suspicious if a case of this type is detected in an area with a reverse trend, but the doctrine of “act kills vote” makes it impossible to review the cédulas, which are destroyed after local scrutiny.

-Board members with the same two surnames

Peruvian electoral law prevents two direct family members from being members of the same table, who are designated by lottery. But according to the claim of Fuerza Popular, that is what would have happened in 65 cases nationwide, since the signatories have the two identical surnames.

The chances that they have the same last name are high because the tables are arranged in alphabetical order.

As in the previous case, the general provision is that these situations must be challenged by the representatives present and the claim would not succeed a posteriori. Beyond the lottery and pre-voting challenges, it may happen because when a polling member is missing, the first person in line to vote is asked. Due to the pandemic, in the first round there were many problems for the conformation of tables and several cases were detected in which the replacements were family members, without registering complaints about it.

At Monday’s conference, Keiko Fujimori presented a case from Puno, with three members with the same first surname, Catacora. However, it is a very common one in the southern area and the three individuals later denied being related and demanded an apology.

On Thursday afternoon, an Electoral Jury from Moquegua ruled against one of these claims and stated that If two board members are family members, it is not grounds for nullity.

-Invalidation due to wrong sums, wrong or missing data

Finally, 102 minutes contested by Fuerza Popular would have records with inconsistent data, such as more valid votes than voters, or blank boxes.

In the example published by Fuerza Popular, the act wrongly recorded as blank votes all the ballots corresponding to the people who did not attend to vote.

The jury must define in each case if there are flagrant errors that warrant that the record be eliminated from the calculation. However, it is possible that these are insignificant errors such as that of the image (in which no party is favored), since the minutes have undergone two revisions at the time of being computed.

Strangely, the sample act is positive for Fujimori, so his campaign would lose 200 votes if that particular annulment claim succeeds.

The first instance of justice, although the number of requests is unprecedented, must decide within three days and its rulings are appealable.

Beyond all the interpretations and possible real inconsistencies that could be found in the minutes, Article 36 of the Organic Law of the National Elections Jury indicates that the Special Electoral Juries declare the nullity of tables when “fraud, bribery, bribery, intimidation or violence have mediated to incline the vote in favor of a list of candidates or of a certain candidate”, situations that do not seem to be reflected between the challenges.

Faced with the complaints from Fuerza Popular, the National Office of Electoral Processes (ONPE) denies the possibility of fraud, as does the Electoral Observation Mission of the Organization of American States (OAS), which described the process as normal and transparent.

If Fujimori does not win the election, he will have to continue the judicial processes in which he is accused of money laundering and obstruction of justice. The prosecution, which has requested more than 30 years in prison for the former congresswoman, requested this Thursday a new order of preventive detention.