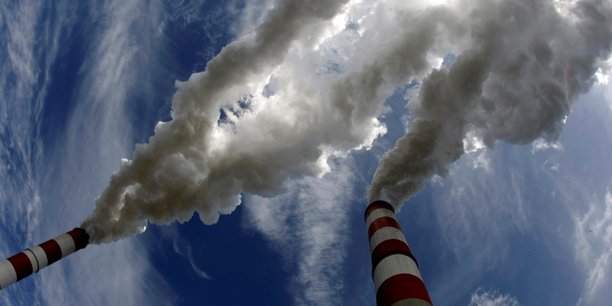 Reactions are fired on the European Commission’s sprawling Climate package published in the early afternoon – the kick-off of the biggest legislative effort ever envisaged by the EU, supposed to put the continent on the path to carbon neutrality in 2050 , by reaching -55% of net greenhouse gas emissions in 2030 compared to 1990.

While the World Economic Forum hailed “ an important step in the overhaul of climate policies “Allowing” on the EU to keep its commitment to reduce its emissions by 55% by 2030 “, Several NGOs denounced a plan” not ambitious enough », Including Greenpeace, Oxfam, WWF France and Climate Action Network.

Unsurprisingly, the most controversial measure is the planned extension of the European Emissions Trading Market (ETS) to road transport and heating of buildings on a ” second carbon market »From 2026. Because in practice, this would amount to forcing suppliers of fuel or heating oil to buy emission allowances at the price of CO2, mechanically passing on this additional cost to household bills.

Environmental NGOs and MEPs of all stripes are fiercely opposed to it: by reaching out to the most vulnerable, tenants of poorly insulated housing or inhabitants of the countryside, “ the Commission seems to forget that it is the middle classes that will pay the price », Observed MEP Agnès Evren (EPP, right).

« Nothing that was presented today will be easy, it will even be damn difficult “, Defended the Vice-President of the Commission, Frans Timmermans. To counter fuel poverty, the institution promises a ” social action mechanism “, A fund fed by the revenues of” second ETS » and evaluated by a European source at 70 billion euros over ten years. Insufficient for the Climate Action Network, which worries ” a social and climatic impasse that the European Parliament and the Member States, including France, must firmly reject ».

“This is a proposal all the more unfair in that, at the same time, heavy industry will be exempt from the polluter pays principle on the European carbon market until 2035 and will thus remain the climate stowaway”, added the NGO in a press release – about maintaining free quotas.

European producers subject to the ETS market have in fact benefited for several years from free quotas – in other words from the “rights to pollute” which are offered to them, to remedy the distortions of competitiveness with products imported at low costs, from countries meeting climatic standards. flexible. But while a carbon border adjustment mechanism (MACF) subjecting EU imports in five highly polluting sectors to the same rules as for European production should soon be put in place, the parallel maintenance of free allowances “ does not encourage the decarbonisation of heavy industry », Denounces WWF France, which calls for their removal from 2023.

“We must consider the social impact and not be subject to the logic of the market alone, especially when industries remain subsidized” via the extension for 15 years of free emission quotas, for his part insurgent Wendel Trio, from the NGO Climate Action Network.

Conversely, steelmakers plead for the long-term maintenance of this aid, deemed necessary for their competitiveness. ” The general orientation is good but the devil is in the details […] We will be very vigilant On the reduction of free quotas, warned BusinessEurope, the European employers.

“We must always take into account industrial competitiveness and avoid relocations”, reacted the German Minister of the Economy Peter Altmaier while welcoming “a step in the right direction”.

The end of thermal cars in 2035, irrational for manufacturers

In addition, Brussels intends to ban all marketing of gasoline cars from 2035, with a boost to install charging points for electric vehicles. A “ advance compared to the date set in France of 2040 “, Underlined WWF France, while the Association of European Automobile Manufacturers (ACEA) deplored a solution” not rational at this stage “. The organization believes that “ all options, including highly efficient heat engines, hybrids and hydrogen vehicles must play a role in the transition to climate neutrality ».

“We ask the EU institutions to focus on innovation rather than making mandatory, or de facto prohibiting, a specific technology,” argued Oliver Zipse, boss of the German manufacturer BMW and chairman of the ACEA, in the press release.

Because by reducing automobile emissions to zero from 2035, the Commission’s proposal for legislation effectively amounts to banning the sale of gasoline and diesel cars, etc., as well as hybrid technologies. Currently, only electric vehicles would be able to meet this requirement. However, the French government has sought to limit the ambition of the European Commission by supporting plug-in hybrid vehicles, without success.

« Neither French manufacturers, nor jobs in France need this controversial technology to make their transition a success. », Reacted Diane Strauss, France director of the environmental NGO Transport & Environment (T&E).

And cars will not be the only vehicles affected, while transport remains one of the main sources of greenhouse gas emissions on the continent. For the first time in the world, planes will have to start using sustainable fuels. Concretely, the EU will require that 0.7% of aircraft fuels be green hydrogen-based fuels, which emit virtually no carbon, by 2030, and will increase the target to 5% by 2035. In In addition, airlines will start paying taxes on their fossil fuels, as do motorists at the pump, which will phased in over ten years.

A proposal ” counterproductive », Reacted Wednesday the International Air Transport Association IATA. ” Aviation is on the path to decarbonization “And does not need” punitive measures such as taxes For a change, IATA said in a statement.

« In fact, the taxes siphon money from the industry that could support investments “aimed at reducing the sector’s emissions through fleet renewal and clean technology.” To reduce emissions, we need governments to implement a constructive policy framework that, in the immediate term, focuses on production incentives “for sustainable aviation fuels (SAF) and” the establishment of the Single European Sky ”, specified its managing director, Willie Walsh.

Other industry lobbies have reacted in a similar fashion, with airlines grouped within the A4E association also calling for the development of electric and hydrogen aircraft.

For its part, the NGO Stay Grounded Network has “ congratulated “Of the measure, while” condemning the slowness of the introduction », The exemption for air freight and its limitation to domestic flights within the EU.