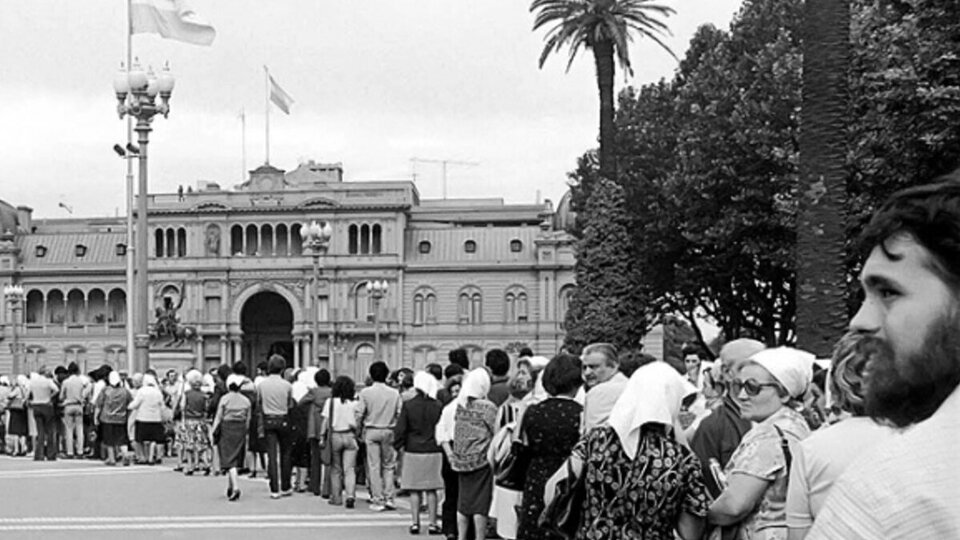 Beginning with President Alberto Fernández and Vice President Cristina Kirchner, officials and leaders of the Frente de Todos paid homage today to the Mothers of Plaza de Mayo on the 45th anniversary of their struggle in search of their disappeared sons and daughters during the last civic-military dictatorship. .

In a post on his Twitter account, President Alberto Fernández expressed his “most sincere appreciation” and his “eternal gratitude” to the Mothers of Plaza de Mayo, about whom he stressed that “they looked terror in the eye,” and published a video with emotional archive images.

From the official account of the Casa Rosada, an animated video was published, with the slogan “Mothers of Plaza de Mayo, 45 years leading the way” and the label #Madres45Años, in which the slow march of two mothers is seen first – one emulates Taty Almeida and another Hebe de Bonafini- with music that repeats: “They will never silence their voices again”, and to which other Mothers are added on the sides, with the Casa Rosada in the background.

As the animation progresses, Malvinas soldiers appear and different audios are heard with milestones in Argentine history such as the trial of the military boards, the demand for trial and punishment, the repression of the Mothers in 2001 under the government of Fernando of the Rua. The video ends with handkerchiefs held high and the emblematic song: “Mothers of the Plaza, the people embrace them.”

“Today we remember the first round of the Mothers of Plaza de Mayo. An example of struggle and resistance that still guides us in building a better country. We will continue to accompany them hand in hand, as they did during the darkest stage of our history. “, published the chief of staff, Juan Manzur.

“45 years ago, the Mothers of Plaza de Mayo marched for the first time. Their example of courage, struggle and integrity represents us with pride throughout the world. Today and always, the people embrace them with love and vindicate the claim for Memory, Truth and Justice”, added, for his part, Foreign Minister Santiago Cafiero.

The Minister of Justice, Martín Soria, highlighted: “On April 30, 1977, a group of women met in Plaza de Mayo to claim for the disappearance of their sons and daughters. Since then, their unwavering search for Memory, Truth and Justice turned them into a beacon for the development of our democracy.

The Secretary of Human Rights, Horacio Pietragalla Corti, also paid tribute to “these women who would become an example of struggle, resistance and collective claim for the search for truth and justice” and published a four-minute video, which begins with the voice in off by Nora Cortiñas, Mother of the Founding Line; and then other voices such as those of Hebe de Bonafini are intertwined, who narrate the history of the group from its beginnings.

In the video, images that go from black and white to color follow one another, and that round recorded in 1978 by the Dutch journalist Jan van der Putten, author of the emblematic interview with the Mothers of Plaza de Mayo, on the same day of the start of the World Cup that year. There are also acknowledgments to the Mothers by Néstor Kirchner and Cristina Fernández when they held the Presidency, as well as by Alberto Fernández today.

The governor of Buenos Aires, Axel Kicillof, also joined the commemoration by remarking that the “45 years of example of struggle, heart and conviction that continue to be a guide. Mothers of the Plaza, the people embrace you! Always” and published a photo hugging Hebe de Bonafini.

Similarly, the Minister of Territorial Development and Habitat, Jorge Ferraresi, recalled that 45 years ago the native of Avellaneda “Azucena Villaflor proposed to go to Plaza de Mayo. She organized with a group of women to do it on April 30, 1977. The police demanded that they circulate. Then they began to walk around the pyramid. Thus a universal symbol of struggle was born. #MemoriaVerdadyJusticia”.

His colleague from Science and Technology, Daniel Filmus, remarked that the Mothers “are an example of peaceful and unwavering struggle in the search for Truth, Memory and Justice.”

The Minister of Social Development, Juan Zabaleta, also noted: “They continue to be an example of struggle and search for Truth, Memory and Justice. The people embrace them, yesterday, today and always.”