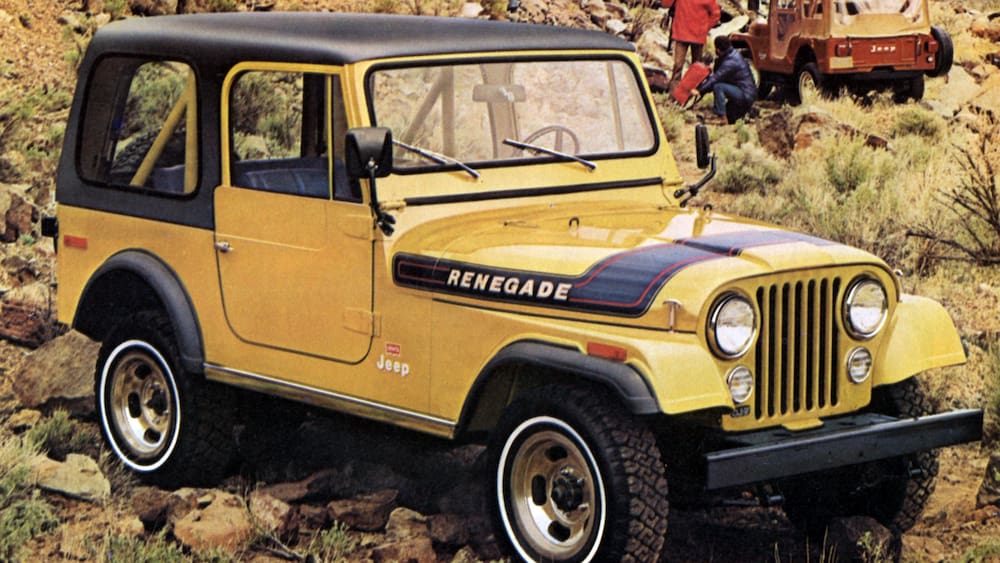 To this day it is unclear why Jeep is called that. At first, Jeep was a nickname for the Willys MB from Willys-Overland. There are theories. The most likely: Eugene the Jeep was a cartoon character from “Popeye” and a mythical creature who could appear unexpectedly and walk through walls and help you out of all sorts of awkward situations. Presumably that is why soldiers named their vehicles Jeep.

Incidentally, Jeep had several families: Willys-Overland became Kaiser-Jeep, and in 1970 the American Motors Corporation (AMC) swallowed it up. Chrysler later bought AMC, married in 1988 to form the Daimler-Chrysler marriage, got divorced and went bankrupt in 2009. Fiat grabbed it and founded Fiat-Chrysler (FCA). Jeep has been part of the Stellantis, which was formed from FCA and PSA (Citroën-Peugeot), since 2021.

On July 15, 1941, the contract was signed to build a lightweight off-road vehicle for the US Army during World War II. The basic design of the original Jeep came from Bantam, the US offspring of the British brand of the same name. Willys-Overland improved and built it (and Ford too, for capacity reasons!). Exactly 647,925 military jeeps were built by the end of the war in 1945.

The military was followed by the first civilian version of the Jeep called car: the virtually identical CJ ​​(“Civilian Jeep”). Worth mentioning is the Willys Station Wagon, a closed station wagon version of the CJ and four years after its launch from 1949 also available with all-wheel drive (picture). One could argue, especially since Russia had the GAZ-31 back in 1938, but Jeep sees this as the world’s first SUV.

Lots of space and lots of equipment, all-wheel drive and, for the first time in such an off-road vehicle, an automatic machine, plus six and eight-cylinders: as controversial as the pioneering role is here, the Wagoneer was probably the world’s first luxury SUV from 1963 – even before the 1970s Range Rover. In 1966 the grill got wider (picture), which lasted until 1991. The new Wagoneer will be launched in 2021.

More wheelbase, more space, more comfort (new with “real” doors, for example) and significantly easier driving for non-off-road freaks: The last edition of the original Jeep, which is still crazy for climbing, conquered the Wrangler (that was the name of a CJ 7 equipment) a wider audience. California, the sun, the sand and an open jeep: the CJ-7 shapes the image of the brand to this day.

With the first “real” Cherokee (there was previously a variant of the Wagoneer under this name), an off-roader with a structure that was unusual at the time (self-supporting body!) Hit the road. Here, too, you could argue again about the 1979 AMC Eagle, but the Cherokee was a hit and is now widely regarded as the most important forerunner of all modern SUVs.

In 1986, after 42 years, Jeep took on the delicate task of replacing the original Jeep. The first Wrangler (pictured) was almost the CJ and so seamlessly followed up with the ancestor’s career. It was almost a sensation when the Unlimited, i.e. the long four-door model, added to the range in 2007. Today’s Wrangler is recently also available as a plug-in hybrid and will probably be electric by 2025 at the latest.

This softie should be a milestone? Yes, because with the Compass, which is also available with front-wheel drive, and the angular brother Patriot, Jeep conquered the masses for the first time. As luckily as the first generation (picture) stayed with us, the Compass contributed to the fact that Jeep more than tripled sales in the last ten years. Since 2014 there is the Fiat 500X clone Renegade below.

One of the pillars of the Jeep model range has been the Grand Cherokee since it was first launched in 1993. The whole new generation of the Grand Cherokee is expected in Europe at the beginning of 2021 – and, like Renegade, Compass and Wrangler, among other things, with “4xe”, i.e. the Jeep plug-in hybrid system with all-wheel drive – and by 2025 it will probably be fully electric .