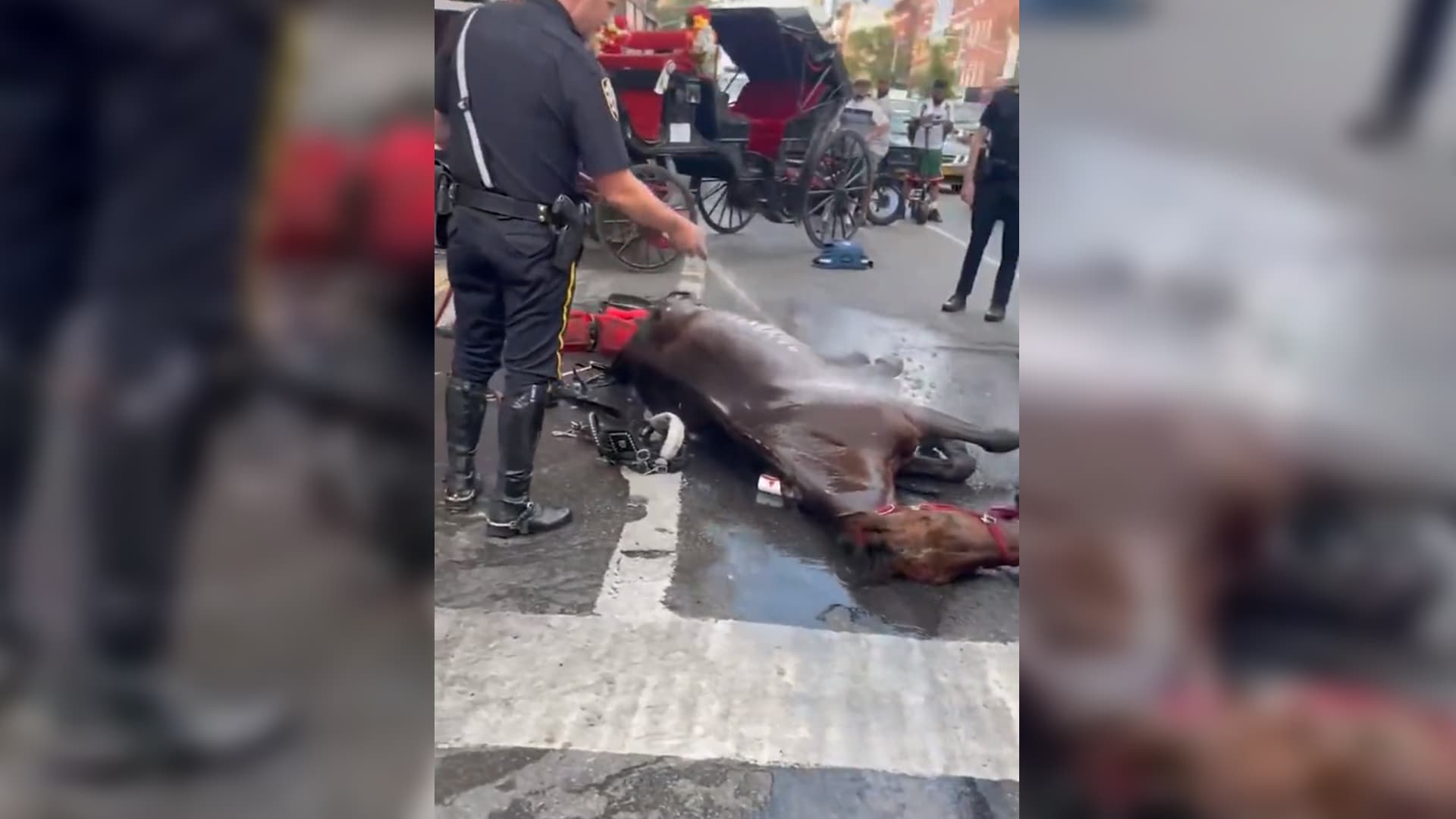 The images of the animal, which was being handled by its owner when it had just collapsed on the road, shocked social networks. The New York police intervened to revive him.

In New York, the debate for the ban on tourist vans is being revived. Wednesday August 10, under a temperature of 30 degrees, a 14-year-old horse named Ryder collapsed in the streets of the American megalopolis. The scene, which was filmed and massively transmitted on social networks, shocked many Americans and Internet users.

It all begins when the horse, attached to a carriage, collapses on the road in the Hell’s Kitchen district of Manhattan. The driver of the vehicle gets out, and tries to straighten the animal. He shook his reins vigorously, and shouted “Get up! Get up!”. But faced with the discomfort of Ryder, who does not recover, the driver is forced to leave him on the road.

Ice cubes and a jet of water to refresh it

The New York police are contacted. Arriving at the scene, the police began watering the horse with a hose, and also gave him ice, thinking that his discomfort was due to the scorching temperatures. A large crowd gathers around the scene, and some residents do not hide their surprise at the presence of this animal in the middle of a city as noisy and excited as New York.

Almost an hour after his fall, Ryder finally got up, to the cheers of onlookers. He will eventually be transferred to a private stable, and examined by a veterinarian. He announced that the animal was probably suffering from equine protozoan myeloencephalitis, a neurological infection that can cause animals to become unbalanced.

“It wasn’t the heat, it wasn’t the fatigue, it wasn’t an overload of work”, defended in the columns of Subway Pete Donohue, a spokesman for the union that represents New York horsecar carriers.

“Horses have no place in big cities”

For him, by becoming a cart horse in New York, Ryder would gain even better living conditions. He used to work on an Amish farm, where he was asked to walk 50 km a day.

“If he wasn’t in the transportation industry, he could be dead by now,” Pete Donohue said.

Explanations that did not convince supporters of a ban on this tourist practice in the streets of New York, which has already been burned by several similar incidents. On NBC New York, Edita Birnkrant, deputy director of NYCLASS, an organization campaigning to end horse-drawn carriages, said: “We are calling on the city council, the mayor, to ban this sickening animal cruelty.”

See also  Scholarship students, the victims of the Michigan shooting

PETA, an animal rights organization, estimated on Twitter that “horses have no place in big cities where they are constantly in danger from cars, men or even the weather”.