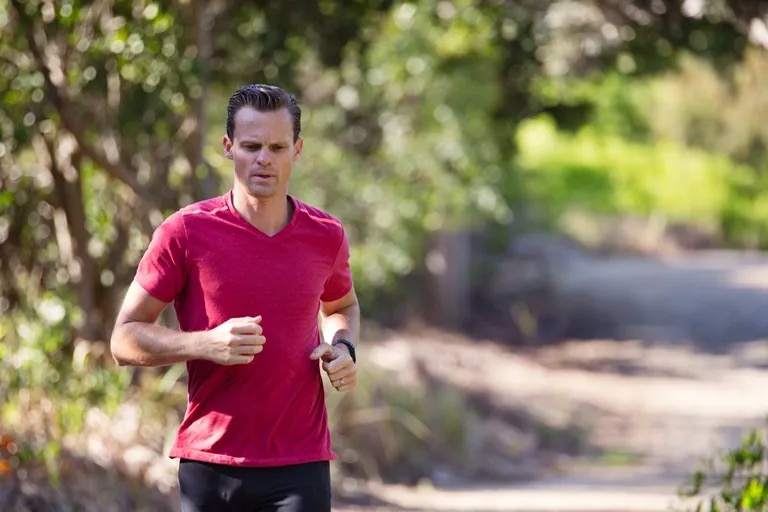 The curious benefits of eccentric exercise, ideal for increasing strength: how to practice it

I did something today that I normally don’t do. When I go jogging, I usually run up a hill, but today I walked up it. However, I ran downstairs. And that’s because, illogical as it may seem, running downhill is probably better for me than running uphill. What I did is known as eccentric exercise and, despite the name, there is nothing strange about it.

The fascinating thing is that, although it feels easier to go down than to go up, the eccentric exercise is really important in all kinds of health benefits, including muscle repair and growth, flexibility and bone density. Although surprising, the easy part, the one where you go down, is actually one of the fastest ways to get stronger.

And it’s not just running downhill, is any exercise in which the muscle is lengthened under resistance, such as lowering weights after lifting them: when lifting weight, the arm muscles contract (that’s concentric exercise); when lowering it, the muscles lengthen. Stretching the muscles in many ways is the most effective part of the exercise.

If they are done well, eccentric exercises can confer truly remarkable benefitsfrom keeping fit to helping the body keep burning more calories when you’re done than a seemingly harder workout.

can be tested with “the challenge of sitting and standing”. The only thing to do is sit in a chair, just very slowly: taking 3 to 5 seconds. Then you have to stand on both legs.

If you feel particularly energetic, and have good balance, you can try the stand on one leg. repeat at least 10 times a day.

Los eccentric exercises they’re the flip side of a lot of moves everyone’s already doing, and they’ve been hidden in the exercise regimen all along, like a secret. You just have to be more aware of them, incorporate them into routines and ensure that the active muscle works. But, Do they really bring significant health benefits in general?

In one of my favorite studios people were asked to walk up or down the stairs of a 10-story building twice a week and that they use the elevator in the other direction. As expected, both groups saw improvements in many health outcomes, but surprisingly the group that took the elevator up and went down the stairs were fitter: Had significantly greater improvements in resting heart rate, which is a measure of overall health and fitness.

A similar result to that of a 2019 randomized control study, which compared older adults doing traditional exercises with a group doing eccentric exercises, found that the eccentric group showed a 38% improvement in leg strength versus 8% in the traditional exercise group. Also reduces risk of injury and can improve balancesomething very important for the general well-being.

Other studies have shown that focusing on the eccentric phase of lifting weights can increase the rate at which calories are burned when the exercise ends.

So for some reason, the part of the exercise that feels easiest actually has the most beneficial impact on the whole… but for what reason? This explains the expert on the strange science behind eccentric exercises, Tony KayeProfessor of Biomechanics at the University of Northampton, United Kingdom.

First, because it’s easier to do. It is much harder to go uphill than downhill, and yet we are moving the same amount of mass as our body.

The second reason is in the way the muscle works. It’s simple math explained with fictitious numbers: let’s say we’re lifting 220 pounds in a squat. When we get up we use 100 muscle fibersso each one is being stressed by 1 kilo. Going down we use different muscle fibers that are much, much bigger and more powerful, so we only use 25 muscle fibers. Each of them has to withstand four times the load, and that creates much more microscopic damage to the cells of those fibers.

It is absolutely fascinating that part of the benefit of exercise is the damage it does: it causes micro-tears, and it’s the recovery that makes you stronger.

And can it also help you burn more calories? Yes and no. Not while you exercise, but after. That’s because it causes more microscopic damage, so it forces the body to increase its metabolic rate for the next few days while it repairs itself, therefore the metabolic rate goes up for an extended period of time.”

What are the benefits as we age? As we age, we get weaker, the muscles in our arms get smaller, and our bones get weaker as well. And eccentric exercise has repeatedly shown more positive effects in all three than any other type of contraction.

We looked at the effect of eccentric training on young, healthy male soccer players, and it showed dramatic increases in strength. We then performed the same exercise on older individuals, older than 65 years, some with clinical conditions. They had very large increases in strength, between 30 to 50%, and a 10% increase in muscle mass in the quads in just six weeks. That is a substantial increase much, much higher than what we would expect from normal exercise.

Another study I did showed a 4-fold increase in range of motion at the ankle than traditional stretching. So it increases flexibility, muscle mass, bone density, strength. It is a highly effective exercise.